Can Pope Francis put the environment on Canada's electoral radar?

Will a call for action from the Pope, on North American soil, make a difference? 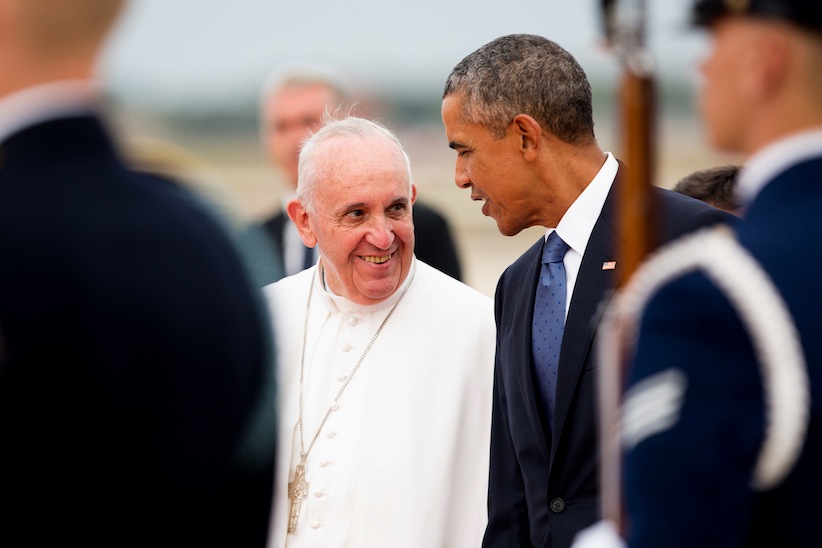 Left to its own devices, this federal campaign would probably unfold in the traditional Canadian manner, a trace of minor-league abuse-of-power scandal (no sex) layered on a standard economic argument: “Tory times are hard times” versus “The tax-and-spend lefties are at the gates”—whom are you going to trust? But, if a week is an eternity in politics, 11 weeks are hell on wheels, more than enough time for events to conspire.

A drowned toddler washes up on a Turkish beach and roils an election campaign, at least for a while, half a world away. This week, the world’s most unpredictable political figure addresses the UN and the U.S. Congress. Pope Francis has quite a few things he wants to say to American Catholics, Americans in general and the world at large. Among them, presumably, will be how he has come to believe that the world’s predominant economic system is killing the planet. That may well inject the environment into a place it hasn’t occupied, firmly on Canadian electoral radar.

Related: Does Pope Francis have an American problem?

Then again, maybe not. Last week saw the Leap Manifesto and its 15 demands, the work of 50 individuals and 100 organizations, ranging from the Anglican Church to Naomi Klein. It included such apparently “unicorn” ideas as: “invest in our decaying public infrastructure so that it can withstand increasingly frequent extreme weather events”; proportional representation; and “an end to all trade deals that interfere with our attempts to rebuild local economies, regulate corporations and stop damaging extractive projects.” It was greeted primarily with contempt by opponents.

Related: The Pope wades into the climate change wars with Naomi Klein in tow

Rex Murphy, in a column dripping with derision, bizarrely compared the Leap Manifesto to Martin Luther’s 95 theses, and managed to sound as dismissive as a Borgia cardinal in Rome hearing of weird ideas out in the sticks. But that reaction, given the reactors—from Murphy to mainstream economists—was only to be expected. What speaks volumes about the true extent of Canadian environmental concern is the absence of any pushback to the contemptuous dismissal.

Many, perhaps most, Canadians worry about climate change and our environmental future, but nothing compared to their economic present. That’s why the politics remain quiescent. The Conservatives have promised steep emissions reductions, for example, but do not even try to hide the fact that they have no pathway to that target, nor any intention of trying to establish one. The NDP and Liberals promise to do better via carbon-pricing schemes, but not to the extent of the Greens—who, unlike the main parties, are opposed to all pipeline projects—for fear they will have the label of job-killers slapped on them. Some political pundits saw the Leap Manifesto as an attempt to drive the NDP further left on environmental issues; if so, it didn’t nudge Tom Mulcair an inch.

Apparently, that’s the way Canadians like it, and it may take the Pope to actually change their minds.

Related: Our in-depth primers on the major campaign issues