Ottawa's takeover of Trans Mountain may hurt B.C.'s efforts to obstruct the expansion project, but protesters say it has 'lit a fire' under them 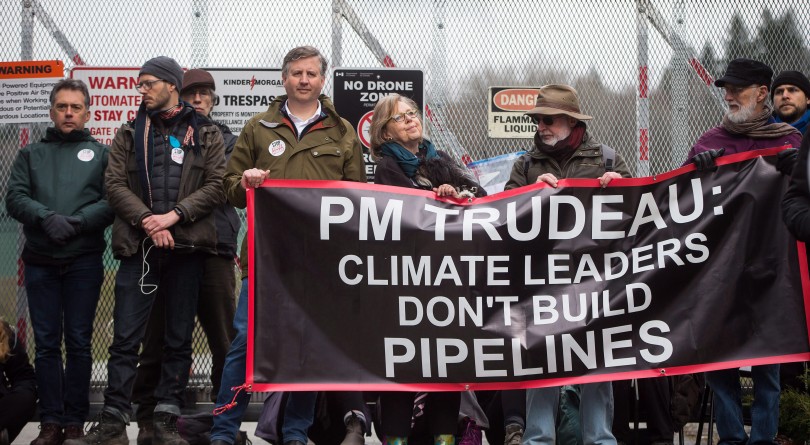 On the morning of May 29, Finance Minister Bill Morneau announced that the federal government will buy the entire Trans Mountain pipeline, but protesters say this $4.5 billion deal is no big deal.

“Honestly, not that much has changed,” says Ben West, a long-time campaigner against pipelines in British Columbia, “other than the federal government is now wasting billions of taxpayers’ dollars.”

In October, Indigenous and environmental groups filed a lawsuit against the National Energy Board, Kinder Morgan and the federal government. The case was heard by the Federal Court of Appeal, which is expected to render a decision in June.

Meanwhile, British Columbia’s provincial government awaits a decision on a reference case with the B.C. Court of Appeal, looking for approval to restrict the flow of oil in the province.

“The lawsuit is still moving ahead,” West says. “There’s still 10,000 people who will get arrested if need be. Really the only difference is Kinder Morgan’s convinced Canada to pay for the project.”

It’s unclear if the court rulings could still stop the project. In 2016, the Federal Court of Appeal overturned approval of the Northern Gateway pipeline project, but it was Ottawa that ultimately rejected the project.

In this case, construction of the Trans Mountain expansion—assuming a private sector buyer isn’t found immediately—will be in the hands of a federal Crown corporation. That would end British Columbia’s efforts to regulate the project, argue government officials.

As for the protesters on the ground, “I don’t think there’s been a successful protest that’s actually stopped something in this country,” says Iain Black, president of the Greater Vancouver Board of Trade.

What’s more, a poll in April found that a growing number and a majority of British Columbians actually support the pipeline project.

However, Black expects demonstrations to continue. “We have a wonderful tradition in our county of civil disobedience up to a point where it infringes on the rights of others, and there’s no reason, in my view, to think that the federal government taking an ownership position in this project and de-risking it from the standpoint of Kinder Morgan is going to impact the appetite of the protesters to have their voices heard.”

Protesters are largely unified under Protect the Inlet, a movement that has set up a base on Burnaby Mountain called The Watch House. The coalition is structured with a council of elders, a steering committee and ground organizers, while a separate group of demonstrators have set up a second camp, Camp Cloud.

As the Liberals try to make a government guarantee on the project, “this is taking a bad idea and turning it into a worse idea,” West says. “I would say this has lit a fire under people if anything.”