Can the Liberal national convention in Halifax boost morale? 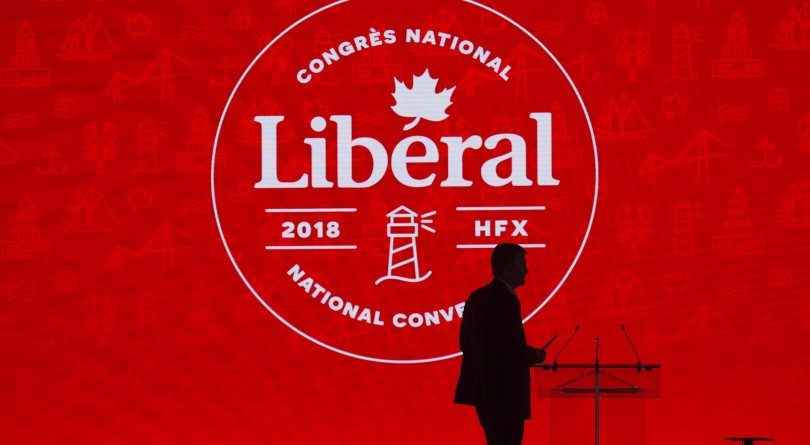 Nova Scotia Premier Stephen McNeil takes the stage at the start of the federal Liberal national convention in Halifax on Thursday, April 19, 2018. (THE CANADIAN PRESS/Andrew Vaughan)

Convention wisdom states that when issues get delicate, delegates are still willing to have a ball. The Liberal Party has usurped one acre of downtown Halifax, a convention centre where members in red pants and other proofs of authenticity jingle with buttons and mingle with the powers that be.

“Party conventions are not where mistakes, if any, are dwelled on,” says Steven MacKinnon, MP for Gatineau and former national director of the Liberal Party. “We have a lot of stuff to be proud of, and we’ll have a choice that will be put on offer I think, starting in Halifax.”

From Thursday to Saturday, the Liberal Party is holding its largest policy convention in decades, its first in Atlantic Canada, and its last before the 2019 election. Keynoted by the Prime Minister, Sophie Gregoire-Trudeau and myriad ministers, the agenda also includes Principal Secretary Gerald Butts, as the leaders signal a message to members, “remember, you trust us.”

The convention comes at a time when the Liberals face upset from both left-leaning and right-leaning members over the Trans Mountain pipeline dispute, and are dropping below the Conservatives according to some polls after Justin Trudeau’s embarrassing escapade to India and a fall full of controversies.

To boost morale and numbers, the Liberals have chosen a venue in a Liberal stronghold, lowered convention fees and kept away from controversial policy proposals.

The party’s past three policy conventions, staggered every two years, have brought defining platform changes like legalizing marijuana, debuted star members like Bill Morneau and Katie Telford, and overhauled party life by enacting a constitution. Yet, the 3,000 people in Halifax this weekend don’t need new ideas or heroes or manifestos; rather, they need to be reassured.

“You have the chance to go out in your community, and don’t shy away from what we’ve done,” said Environment Minister Catherine McKenna in a panel discussion Friday morning, speaking to a hall of party members. “We don’t just make decisions willy-nilly,” she said. “You should be super proud about what we’re doing.”

On the left of the party, environmentalists are criticizing their leader for agreeing to the construction of the Trans Mountain pipeline, while their right-leaning peers complain his government isn’t pushing it through fast enough despite provincial spats. This week, Trudeau’s national security advisor Daniel Jean was also questioned in committee for his involvement in damage control during the leader’s India trip.

“If there was any time where Liberals might be circling the wagon and barricading the gates in terms of attacks from the outside against them, against their brand, against the performance of the government, this would be a time,” says J.P. Lewis, an associate professor of political science at the University of New Brunswick. “How does ‘Sunny Ways’ look when it’s defending itself?”

The party looks disciplined and united based on its party elections going uncontested. This weekend it will elect a new (Haligonian) president, Suzanne Cowan, current English vice president of the party and past director of advertising for Trudeau’s 2015 campaign. Of the other 26 Liberal Party positions with elections this weekend, 20 have only one candidate.

Policy resolutions include a proposal to establish a Ministry of Seniors, with a mandate to “promote and vigorously protect” seniors’ interests, create an Indigenous health care auditor and ombudsman, and expand treatment for opioid users. Other resolutions: explore the feasibility of a fixed link between Newfoundland and mainland Canada, and eliminate the taxation on tampons.

There are no defining resolutions like the cannabis platform voted upon at the convention in Ottawa in 2012, or, in the case of a Conservative convention, the increasingly moderate stances on abortion and same-sex marriage that Stephen Harper released in 2005 in Montreal.

Halifax as a venue was announced last January, a lucky decision that keeps the party at the opposite edge of the country from the site of the Trans Mountain pipeline dispute. All four premiers in Atlantic Canada are Liberal, and when the Energy East pipeline debate arose in 2016, it didn’t hurt that the federal Liberals had strong provincial ties. Minister of Fisheries, Oceans and the Canadian Coast Guard Dominic Leblanc was formerly the campaign co-chair for New Brunswick Premier Brian Gallant, and the party also holds every federal riding in Atlantic Canada. Locals have shown such support for the convention that about one in six attendees are Nova Scotian.

“At the last convention, we from Nova Scotia put a great push forward,” says Andy Fillmore, MP for Halifax, who made buttons at the 2016 Winnipeg event in support of the East Coast venue. “We were prepared to really get the word out that Halifax was the place to be.”

The party pitched the convention as the most accessible to date because it no longer limits attendance to selected “delegates” but welcomes anyone who has registered—for free—as a Liberal. However, “There was really never an instance where someone who was motivated to attend a convention was unable to secure a delegate spot,” says MacKinnon, “so materially this may not make much of a difference, but as a formal thing and as a highly symbolic thing, I think it’s important.”

For MacKinnon, Halifax is his 25th convention, having attended his first in Ottawa instead of his high school prom. “Party conventions are not about persuasion. Party conventions are about setting the animating characteristics of a political party and sending people back to their ridings with a sense of mission and purpose,” he says. “We have to leave Halifax and fan out across the country and defend.”

In Halifax, Science Minister Kirsty Duncan blows kisses to someone she sees; MP Bill Casey poses for photos with fans, and Catherine McKenna, wearing red pants she got in Flin Flon, Man., offers a dance to a toddler. Poll numbers are down; heads are up, and a minister, for a moment, swings her arms side to side.