Can the NDP be first place for First Nations?

With 22 Indigenous candidates, and a fully-costed platform, the NDP is hoping to turn Aboriginal voters away from the Liberals 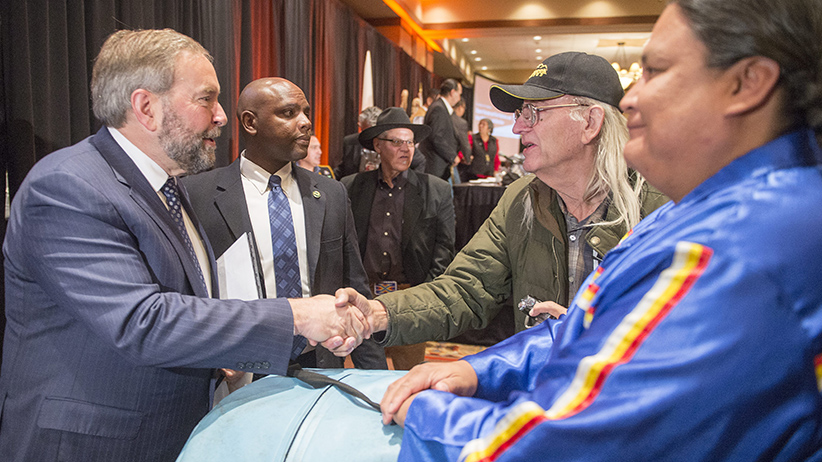 NDP Leader Thomas Mulcair is finishing off his day in Kenora. The sprawling northwestern Ontario riding is home to 40 Indigenous communities, 25 of them under boil-water advisories—though it’s hard to consider these “advisories” when successive governments have allowed them stand for decades.

Conditions on the Shoal Lake 40 First Nation is particularly galling. It provides Winnipeg with all its drinking water, but the community itself has had to endure a boil-water advisory for 17 years. Residents were cut off from the outside world, with no year-round access road, when it was tapped by the Manitoba capital decades ago.

Related: Why can’t we get clean water to First Nation reserves?

On the nearby Neskantaga First Nation, where a boil-water warning has been in place for 20 years, dirty water is blamed for a host of illnesses, sores and rashes; its Oji-Cree residents are forced to bathe their babies using cleansing wipes.

So it’s an important riding with deadly serious issues, and one in which the NDP, represented by former provincial NDP leader and Kenora MPP Howard Hampton, hope to pick off Resources Minister Greg Rickford. Right now Hampton and Liberal Bob Nault, who represented the riding under Jean Chrétien, are tied in support at 29 and 28 per cent respectively, according to a recent Environics poll. Rickford is ahead, at 40 per cent.

For a long time, many Indigenous voters in the 40 per cent Indigenous riding could be counted on to vote Liberal—but that’s starting to change. Many still remember the First Nations Governance Act that Nault introduced when he was minister of Indian affairs; that landmark legislation—designed to clean up reserve finances—was widely hated, particularly by chiefs. More and more Indigenous voters, who traditionally voted Liberal, are shifting allegiance to the NDP.

Jack Anawak, who is running for the NDP in Nunavut, is the most high-profile NDP switch-hitter. For Anawak, who supported the party in his youth, “it’s not so much a switch, but a return to my roots.” For the longest time, he says, “a lot of Indigenous people thought the NDP was the party who could best represent them—but they didn’t think the NDP had a hope of forming government. Now they do.”

It’s hardly been a stampede, but the party has attracted 22 Indigenous candidates this election, among them a host of prominent names, including artist and consultant Aaron Paquette, who is running in the new Edmonton–Manning riding; Cameron Alexis, a retired RCMP officer and former chief of the Alexis Nakota Sioux Nation running in Alberta’s Peace River–Westlock riding; and Melissa Atkinson, a lawyer and former chair of the Yukon Human Rights Commission, who is running to represent that territory’s lone riding.

For Anawak, the choice was simple: “It’s the first time a leader of any major federal party has stressed the importance of negotiating on a nation-to-nation basis. That’s deeply important to Indigenous people, says Anawak. “Not so long ago Inuit were just numbers to the government. They couldn’t care less about learning to spell our names. So they just gave us numbers.” Anawak had one, too: 83922.

The pledge to deal on a “nation-to-nation” basis was a key announcement made by NDP leader Tom Mulcair today at the River Cree Resort in Enoch, Alta. He was there to take part in a forum on First Nations issues, but was the only party leader to show up. So he took the opportunity to release the party’s Indigenous platform; the NDP is alone in releasing a full platform of promises for Indigenous communities and people.

The party also announced $1.8 billion for First Nations education—more than any other party—and promised to create a cabinet-level committee chaired by the prime minister, to ensure that all government decisions respect treaty rights, inherent rights and Canada’s international obligations, including the principles of the United Nations Declaration on the Rights of Indigenous Peoples. The NDP also reannounced a plan to hold an inquiry into missing and murdered Indigenous women and girls within 100 days of being elected. The party is promising to remove the two per cent funding cap on social transfers to First Nations.

“For 13 years, the Liberals had the opportunity to advance the issue of First Nations people. Instead, we got the funding cap,” says Idle No More activist Tania Cameron, who ran for the NDP twice in Kenora. “They had a chance to change this. First Nations communities suffered for it.”