Can those wearing a niqab vote in an election where the niqab's a hot issue?

Wearing niqabs at the ballot box was an issue in past years. Will it become one again? 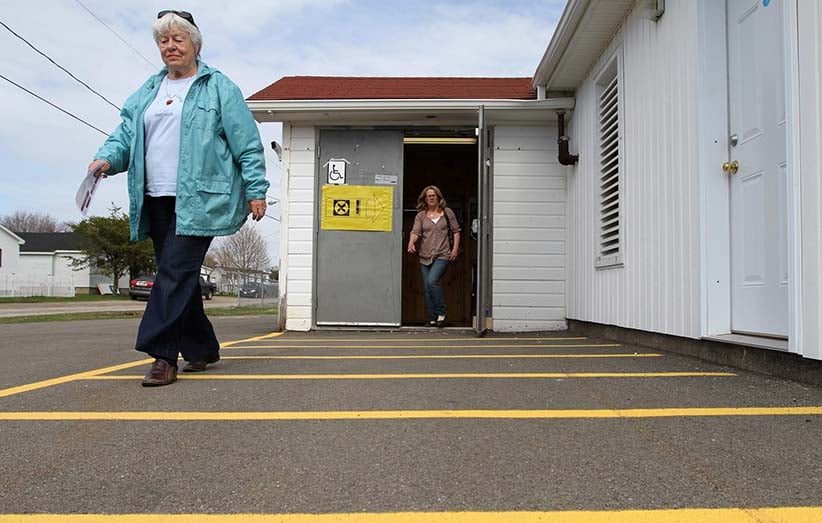 People leave a polling station in Point-du-Chene, New Brunswick as Canada goes to the polls for the federal election on Monday May 2, 2011. (Cole Burston/CP)

Alongside some questions about what partisan scrutineers can and cannot do, part of Election Canada’s online “frequently asked questions” about behaviour at polling stations reads like something ripped from a “First World problems” webpage. Can I use my smartphone? (Yes, but don’t be disruptive.) May I share a photo of my ballot? (No.)

The first one in this FAQ list, however: Can I vote wearing a face covering? Yes, although you’ll be asked to remove it, but if you wish not to, you may show ID and swear an oath attesting to your identity, and then you can vote. “Election officers have been instructed to exercise respect and sensitivity in following this administrative procedure,” the website states.

Let’s consider what makes these frequently asked questions. Many, if not most, voters have pocket computers, and the illegal phenomenon of “ballot selfies” or ballot tweeting has come up in multiple jurisdictions. As for face coverings, it concerns perhaps some 100 or 200 niqab-wearing women in Canada. Even if it’s more, this will come up in a near-invisible pie-chart sliver of the roughly 66,000 polling stations on Oct. 19 and advance voting that starts Friday. In the two elections since voter-identification rules were revised, Elections Canada has not logged a single complaint about veils and voting, spokeswoman Leanne Nyrifa says. “These are just questions we know we are likely to get from electors in general.”

Canada’s voting agency is, apparently, hip to what makes the headlines, with a Federal Court ruling and political high dudgeon thrusting into the spotlight the use of veils at another pivotal act of being Canadian: citizenship ceremonies. (The path is now clear for Zunera Ishaq to become a Canadian and vote, and she’ll be able to do so dressing as she pleases.) The Conservatives and Bloc Québécois have pressed wearing face coverings at the oath-taking as a symbolic offence, one Prime Minister Stephen Harper has vowed to enshrine in legislation.

Both the Bloc and Conservatives have also pitched legislation to force voters to unveil, though only Gilles Duceppe’s party has done so this campaign. Tories have tried to do so in bills before the 2008 and 2011 elections, but it hasn’t come up in this long campaign—unless it’s a constitutionally iffy promise they wield closer to when Canadians visit polling places.

Harper certainly feels passionate about visual identification at the polls, or did back in 2007, when a set of Quebec by-elections prompted then-new Elections Canada head Marc Mayrand to declare Muslim women who wished not to remove their veils would be accommodated with an oath or with vouching (a practice the Conservative government has eliminated). “I profoundly disagree with the decision,” the Prime Minister told reporters.

As a sign of how cultural politics can shift with the times, he was supported in his stance not only by the Bloc, but also the Liberal and NDP leaders, days before Quebecers would vote in contests, one of which made Tom Mulcair an MP for the first time. “Canadian citizens have a responsibility to fully reveal their identities,” Stéphane Dion said. Jack Layton wanted Mayrand to change his policy: “If not, it appears it will be necessary to change the law to make it clear.” Two months later, when the government tabled a bill to change that law, the Liberals and NDP reverted to their contemporary position against laws that single out religious minorities. The Tories cried flip-flopping, while Liberal MP John Godfrey offered some genuine regret about responding hastily. “I think, in the fullness of time, we’ve realized that this problem is not a problem,” Godfrey said. “I think that, with reflection, we should’ve behaved differently, and I think we have to admit that.”

The Conservatives, too, behaved shades differently on niqabs eight years ago. That is, their tones weren’t as dark as they are now. “We realize that some customs require women to cover their faces in public,” Quebec MP Laurence Cannon told Parliament about the 2007 bill that never made it to committee. “We want to clearly state that this bill does not target them. It targets people who want to use those customs to commit electoral fraud.” (That fear only exists in the land of hypothetical in Canada, much like stoning women in Herouxville, Que.) The 2015 Conservatives’ Jason Kenney has been more clear about the citizenship policy’s target, saying niqab wearers are observing a “medieval tribal custom.”

Conservatives did not provide to Maclean’s its current position on voting. Perhaps the party has flip-flopped, or, as we can say more humanely, evolved, to believe that oath-taking while veiled at citizenship ceremonies is a problem, but the same act near a ballot box isn’t. Perhaps they don’t want to launch another potentially unwinnable constitutional battle; visual verification isn’t required when voting by mail, after all. Perhaps the answer will be the strategist’s ominous utterance: Stay tuned.

Elections Canada has no record of how many people have remained veiled and voted, or whether or not it exceeds the two would-be Canadians spurned by the citizenship-ceremony provision. Just as women are comfortable privately revealing their faces before citizenship events, doing so at the polls wouldn’t be a problem for most, either, says Maryam Dadabhoy of the National Council of Canadian Muslims.

“Some may feel more comfortable requesting that they seek a female official at the polls to verify their identity, but if there is no female available, I don’t think they would have a problem showing their face for identification purposes to a male official, then putting it back on,” she says.

Gilles Duceppe tried to make an issue of veiled voting at the first French debate. Harper didn’t touch it. With less than two weeks left, and the rituals of voting to soon re-emerge in Canadians’ minds, will the Conservative leader rediscover this powder-keg fuse?