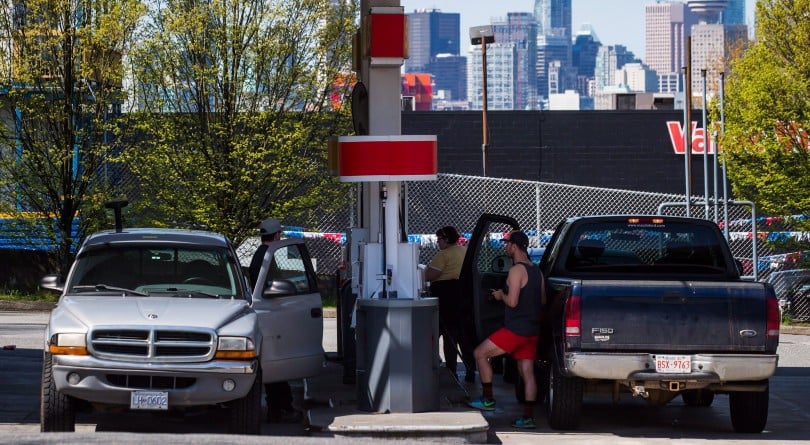 Motorists fuel up vehicles at a Shell gas station in Vancouver, B.C., THE CANADIAN PRESS/Darryl Dyck

The Saudi campaign of slaughter in Yemen has been been a boon for Canadian arms manufacturers, writes Stephen Maher, though Liberal and Conservative politicians have at times twisted themselves in knots trying to justify weapons exports to the kingdom. But with the gruesome murder of one of the regime’s critics, what will it take before Prime Minister Justin Trudeau finally admits enough is enough:

Trudeau has been reluctant to act, no doubt for the very good political reason that thousands of manufacturing jobs in hard-pressed southwestern Ontario, and many more across Canada, depend on selling arms to Saudi Arabia. If we must turn a blind eye to the horrors they produce, so be it.

Under pressure, last week, he warned that cancelling the deal could cost us $1 billion, and resorted to blaming Harper for signing a deal that includes a non-disclosure agreement that prevents him from discussing its terms. A tweet from a former advisor suggests the contract poses knotty problems for the government, and we might well ask why we are not able to know what’s in an agreement that binds us to selling weapons to killers, although we should not expect an answer. (Maclean’s)

Rebate debate: When Trudeau announced his backstop carbon pricing plan to deal with provinces that refuse to apply their own carbon taxes, a key element was the rebate cheques that would, in many cases, more than compensate households for what they’ll pay in higher fuel prices. Critics immediately pounced, accusing Ottawa of trying to buy votes. But would the carbon price rebates really boost support for the tax? That’s debatable:

We used polling data, provided by Environics, to understand how support for the carbon tax in British Columbia was affected by receiving the carbon-tax rebate. Specifically, we compared opposition to the carbon tax over time in B.C. cities larger than 100,000 people, to those in smaller communities, where many household began to receive this new carbon tax rebate starting in 2011.

If receiving the carbon-tax rebate increased support for the tax, we should be able to see this in the polling data. But instead, we find the opposite pattern… . Before this new rebate was implemented, opposition to the carbon tax was similar in B.C’s small and large communities. However, following the rebate, households in small communities actually became more opposed to the carbon tax relative to their big-city counterparts, despite receiving the new carbon tax rebate. (Maclean’s)

No byelection for you: NDP Leader Jagmeet Singh remains stuck in a holding pattern as he tries to land a seat in the House of Commons ahead of next year’s election. Four seats are empty, including the seat in Burnaby, B.C. where Singh intends to run, however on Sunday Trudeau only chose to call a byelection for a riding in Ontario. The federal NDP are livid. Says NDP MP Peter Julian: “It’s unprecedented and very petty and manipulative.” (Burnaby Now)

Tomorrow Bank of Canada Governor Stephen Poloz and Senior Deputy Governor Carolyn Wilkins are set to appear before the House Finance Committee to discuss the central bank’s most recent rate hike. Among the likely topics as they discuss the bank’s outlook for the economy—America’s steel tariffs.

Canada’s ambassador to the U.S., David MacNaughton, seems convinced the tariff fight will be resolved “sooner rather than later.” His counterpart, U.S. ambassador to Canada Kelly Craft seems less convinced: “We can agree to disagree.” One thing seems increasingly certain—the renegotiated NAFTA deal could be dead in the water unless Washington ditches the tariffs. (iPolitics, Canadian Press)

Make that one more province miffed with the Trudeau government. Alberta is accusing Ottawa of backtracking on its funding commitment for Calgary’s 2026 Winter Olympic bid. (Canadian Press)

“I’ve always considered myself a master of deception,” says one femme fatale who is called, by those who survive her attentions, “The She-Wolf of Novosibirsk.” “But faced with something like that, it just feels like none of my lies really mean anything.” She sighs, defeated. “He spent 45 minutes talking about the time he scored a hole-in-less-than-one. He wasn’t even trying to impress anyone—he just called up a pharmacy in Wyoming and started lying to the automated prescription-refill line.” (Maclean’s)