Canada and India can't seem to make a trade deal. Here's why. 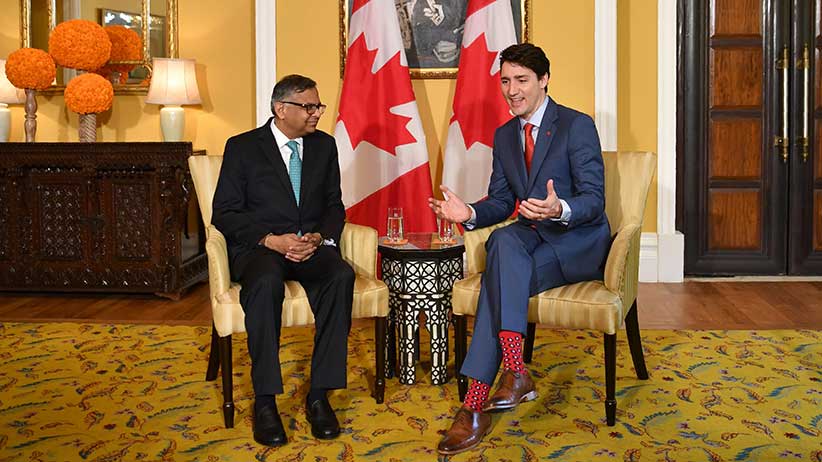 In the summer of 2011, newly-appointed Minister of International Trade Ed Fast travelled to New York, where he met his Indian counterpart. “We congratulated each other that [an investment treaty] had been finalized,” he recalls. “All we needed was to find a date on which to sign it.”

That date never came. Negotiations on both the Canada-India Foreign Investment Protection Agreement (FIPA) and the Canada-India Comprehensive Economic Partnership Agreement (CEPA)—deals that were intended to add billions to the trading relationship and the gross domestic products of both countries—remain ongoing.

Merchandise trade between the two countries totalled $8.3 billion in 2017, per Statistics Canada data; with Germany, by contrast, Canada did $22 billion last year. The two agreements being negotiated promise to boost that figure significantly. But while commerce is one major focus of Prime Minister Justin Trudeau’s ongoing visit to India, government officials have confirmed that a trade deal is not.

RELATED: The troubles facing Justin Trudeau on his first state visit to India

Talks on CEPA, the trade agreement, began at the end of 2010, after Prime Minister Stephen Harper visited India and a joint study forecast a deal would produce a GDP gain of US$6–15 billion for Canada. The following year’s throne speech declared the government’s intention to complete negotiations on the deal in 2013.

That did not happen. There have been 10 rounds of discussion in total. The latest, in August 2017, came after a more than two-year gap. Political events, differing negotiating styles and technical approaches to trade, and the passage of time have all conspired to prevent the deals being finalized.

One potential challenge added by the Liberals is its championing of “progressive trade,” with the government seeking to include accords on gender, the environment, labour and human rights in preliminary talks with China and treaties like the Trans Pacific Partnership. “We focused on the commercial benefits of [trade] agreements, whereas the Trudeau government sees [them] as promoting the prime minister’s own value agenda,” Conservative Fast claims. “And that has run into significant opposition elsewhere around the world.”

These topics are now also part of the CEPA negotiations with India, sources confirm.

Harsh Pant, a professor of international relations at King’s College London notes that after the Trump administration withdrew from the Paris climate accord, Prime Minister Narendra Modi said India would honour its commitments. But the Indian government is unlikely to welcome the discussion of these kinds of subjects in the context of CEPA. “These are not directly related to the trade negotiations and should be kept out of the discussion,” is how Pant describes the longstanding Indian stance, though he notes that Modi favours transactionalism and reciprocity in international relations, so there might be room for some give-and-take.

“Progressive trade”, however, is just one new hurdle on a negotiating track already strewn with them. The scope of the deal has been a major point of difference. India has been “unwilling to provide the kind of market access that Canada would typically expect” from a trade agreement, says Fast. The Indian government has shown no hesitation in protecting politically-sensitive sectors like agriculture, recently imposing tariffs on pulse crops—Canada’s largest single export to India—to regulate its domestic market. Its priority, meanwhile, is labour mobility, particularly for technology workers.

Differences in process, resources and approach between the two bureaucracies have also slowed progress towards an agreement. Canada’s negotiating team of 20 or 25 people was often sat across the table from just four or five Indian counterparts says Stewart Beck, CEO of the Asia-Pacific Foundation of Canada and Canada’s high commissioner to India from 2010 to 2014. And caution is the byword on the Indian side. “What we’ve understood of Indian technocrats is they’re very systematic,” says Dr. Anita Singh, who studies the bilateral relationship. “They’re okay going line by line by line, word by word by word.”

Pens were downed during the federal elections in both countries. In India, the new government under prime minister Narendra Modi put all bilateral trade negotiations on hold as it reviewed the country’s trade policy, creating “a certain amount of frustration” for the Canadians, says Vivek Dehejia, an associate professor of economics at Carleton University and fellow at Mumbai-based think-tank the IDFC Institute, who has spoken to people on both sides. Canada is not the only player trudging through a long negotiation process with India. Australia, New Zealand, and the EU all initiated trade talks before or around the same time, and none have yet concluded treaties.

Swept into power by a notably young electorate that needs jobs, Modi was seen as a pro-business leader interested in meaningful economic reform. Canada had evidence of his bonafides from his support of Canadian businesses that invested in Gujarat when he was chief minister. “We had assumed that [he] would bring more of an openness to trade liberalization to the table,” says Fast. “Certainly during the time I was minister, we weren’t able to translate that into significant progress on either the [investment] or the trade agreement.”

Some challenges are technical. On services, Canada uses a negative list, meaning that any services not included or developed in the future are considered to be affected by the liberalizing measures of the deal. India favours the World Trade Organization convention, whereby only sectors itemized in the treaty are subject to the revised rules. And Fast points out that India’s template for investment agreements does not include a “ratchet” clause, which stipulates that once a sector has been liberalized, restrictions on investment cannot be reinstated.

Canadian institutional investors are already making substantial commitments in India, particularly in sectors like infrastructure, real estate and finance. But the investment deal between the two countries remains unfinished. The two sets of negotiators have twice approached what the Canadian side took to be an accord since the launch of talks in 2004, only for the Indians to seek to re-open the text of the deal. “India would like both to be signed together,” says Shashishekhar Gavai, the country’s high commissioner to Canada from 2008 to 2012. Although some details of the investment treaty have yet to be finalized, the Indian side most recently backed away from the table over the timing of the trade deal, sources confirm.

Trudeau’s Indian itinerary includes several meetings with local business leaders, including the heads of some of the country’s biggest companies like the Tata and Birla conglomerates and IT outsourcing giant Infosys. On Tuesday, he announced $250 million in Canadian projects from Indian firms in Canada, though three times as much in investment is set to go the other way.

While Modi has managed to attract significant international investment and his approval among the public remains strong, it is not clear yet that he is delivering on his promises. Just three per cent of Indian respondents to a recent Gallup survey said they were “thriving,” against 14 per cent  when Modi took office.

RELATED: The disappointment of Narendra Modi

Still, the International Monetary Fund projects India’s GDP will grow 7.4 per cent in 2018, making the country a high-priority target for many governments. Modi’s hold on power also reassures them. The BJP or its allies are in office in 19 of India’s 29 states, many of those wins attributed to the prime minister’s personal popularity. That gives him a considerable mandate in the eyes of other countries to make deals. “He can sell anything to India,” says Pant.

Kasi Rao, president and CEO of the Canada-India Business Council (C-IBC), says the interest in the visit he’s seen from Indian businesses is cause for optimism, and he’s bullish on the economic prospects for the relationship, despite the low base so far. “The modesty of the numbers reflect the past, not the promise of the future,” he says.

But achieving that potential may be difficult in the absence of legislative encouragement. Singh sees a cyclical argument at work. “We’re not improving trade because we don’t have a bilateral agreement for free trade,” she says, while at the same time looking for evidence that such a treaty would be successful.

In any case, neither the trade nor the investment agreement will be signed during Trudeau’s visit. And Dehejia notes that federal elections are scheduled in both countries next year. “Maybe we’ll see something on this post-2019,” he says. “But I wouldn’t hold my breath.”