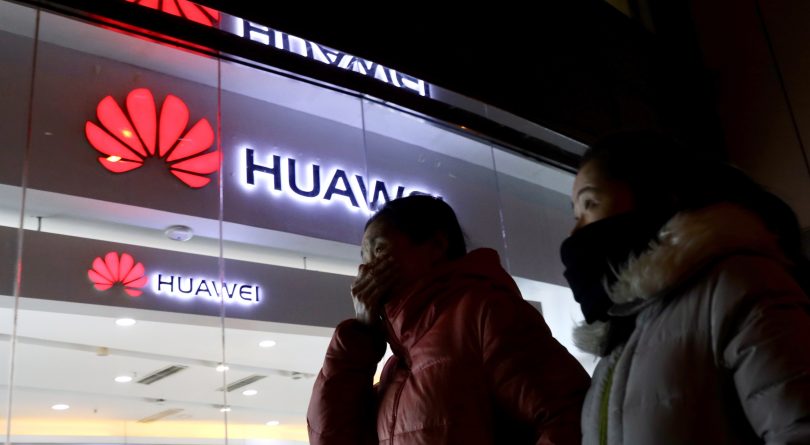 Women walk past a Huawei retail shop in Beijing Thursday, Dec. 6, 2018. China on Thursday demanded Canada release a Huawei Technologies executive who was arrested in a case that adds to technology tensions with Washington and threatens to complicate trade talks. (AP Photo/Ng Han Guan)

Canada found itself in an uncharacteristic position Thursday: at the centre of the latest global stock market rout. On Saturday police at Vancouver arrested Meng Wanzhou, the CFO of Chinese telecom giant Huawei (and daughter of the company’s founder), at the request of U.S. authorities. Meng is accused of violating sanctions on Iran and is set to be extradited to the U.S. The move immediately raised fears that the trade war truce that Donald Trump and Xi Jinping agreed to at the recent G20 meeting is at risk. After the news broke markets from Asia to Europe to North America tumbled. (Global News)

The question for Canada now is how the arrest will play out between Ottawa and Beijing, given the Trudeau government’s attempts to smooth relations with China. Trudeau said authorities notified him in advance of the arrest, but that there was no political involvement, telling reporters: “The appropriate authorities took the decisions in this case. We were advised by them with a few days’ notice that this was in the works but of course there was no engagement or involvement in the political level in this decision because we respect the independence of our judicial processes.”  (Globe and Mail)

As premiers arrived in Montreal for today’s first ministers’ meeting with Trudeau, some were already preparing to leave, namely Ontario’s Doug Ford. Sources close to Ford told the Canadian Press he’s prepared to walk away from the table if Trudeau doesn’t put the carbon tax on the table. (Canadian Press)

The likelihood of Trudeau agreeing to scale back the carbon tax is near zero, so expect Ford to theatrically hightail it out of there. But Western premiers who were also unhappy about the meeting agenda because it did not include discussion about Canada’s oil glut may have more luck. On Thursday Trudeau said he’s open to helping Alberta purchase rail cars to haul oil out of the province, and he also suggested an increase in EI payments for unemployed oil patch workers. That’s an about face for the Trudeau government from less than two weeks ago when Finance Minister Bill Morneau poured cold water on the idea of Ottawa buying rail cars to shop oil. (CBC News, Bloomberg)

The federal government is backtracking on its controversial summer jobs grant program, which angered faith-based groups last summer by compelling applicants to “attest” their support of abortion rights. Under the new rules, the application process will no longer ask what rights it respects, and instead it will make ineligible any jobs that “actively work to undermine or restrict a woman’s access to sexual and reproductive health services,” or that “advocate intolerance, discrimination and/or prejudice.” Maclean’s Ottawa bureau chief John Geddes spoke with Labour Minister Patty Hajdu about the changes and whether she thinks the new wording will end the debate:

We’ve worked really closely with all kinds of different groups, with all kinds of different Canadians. We’ve worked closely with faith-based groups, but also with progressive groups that advocate for individual human rights. I’ve listened to members of Parliament, a number of whom have done extensive consultations with faith-based groups in their regions.

Because of those ongoing and rather in-depth conversations, I feel comfortable that most groups are going to feel that their activities are perfectly fine for funding. What we heard from faith-based groups is that they want to be very clear that this isn’t a judgement about what they believe. I think we’ve managed to do that. The application is very clear that this is about projects and activities, it’s not about faiths and beliefs. (Maclean’s)