Canada's approach 'of partnership, of collaboration, of engagement' is better than that taken by U.S., says Trudeau 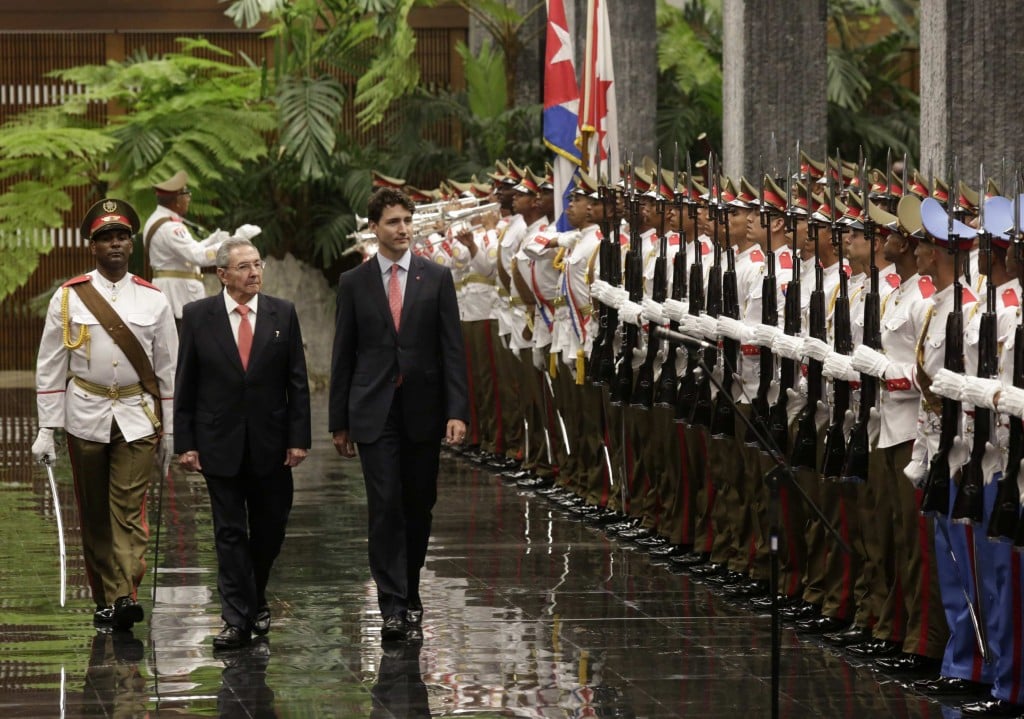 HAVANA – Prime Minister Justin Trudeau told a group of Cuban students today that he won’t change Canada’s stance on Cuba, even though his views are at odds with the man set to lead Canada’s biggest trading partner.

When asked about the U.S. embargo on Cuba, the election of Donald Trump and concerns about the future of Canada-Cuba relations, Trudeau repeatedly tried to calm curious university students in his audience.

“For me, election results in the United States won’t change the strong relationship that is a friendship and a partnership between Canada and Cuba,” Trudeau said.

Trudeau said Canada doesn’t see a contradiction or issue with being a steadfast and unflinching friend to Cuba and being an ally of the United States. He said the foreign affairs stance is one way Canadians reassure themselves “that we are our own country, that we make our own choices.”

“We disagree with the approach the United States has taken with Cuba. We think that our approach is much better – of partnership, of collaboration, of engagement,” he said.

“But it’s not our job to tell our friends and allies what they should do or shouldn’t do. It’s our job to make sure we’re doing what we know that we should do, that we can do in terms of creating opportunities for Canadians, for Canadian companies, but also opportunities for Cuba to continue to develop, to modernize, to improve in the many areas that it’s building success in.”

The hour-long session with students at the University of Havana came on the same day the Cuban military began five days of exercises, manoeuvres that were first staged when Ronald Reagan was in the White House, but haven’t taken place in the last three years.

The exercises are seen as a direct response to Trump’s election victory in the United States and his promise to roll back the steps Barack Obama has taken to revive relations with Cuba that were cut off in 1961.

At the time, Canada decided to retain ties with Cuba. Trudeau referenced his father’s visit to Cuba as prime minister in 1976, the first by a NATO leader and his own personal forays to Cuba in his remarks to the assembled students, media and Cuban officials.

The event came after the prime minister sat down in the morning with eight “civil society” representatives, including a former Cuban diplomat to Canada, a blogger, a leader in the country’s Jewish community and a documentary filmmaker critical of state policies.

The eight were chosen because they spoke to issues the prime minister has trumpeted at home and abroad, but also because they, as locals say, speak to the unspoken issues in Cuba: homophobia, racism and sexism.

Some in the room have faced harassment, or been detained for their public views. Others have advocacy groups that must come under the umbrella of the state in order to be eligible for funding and continue operations.

The group was different from the dissidents U.S. President Barack Obama met during his visit to Cuba, after relations were renewed in December 2014.

Trudeau told the students later about the meeting with local activists, adding that he raised issues around governance and human rights with Castro during their closed-door meeting Tuesday night.

Earlier in the day, Sophie Gregoire Trudeau spoke at a panel on gender equity where she praised Cuban leaders for being “very open-minded and open-hearted” about the work done to create equal opportunities for women and also for recognizing what remains to be done.

“Change, real change, doesn’t happen in a society because it’s time or because people are suffering,” she told the audience in English. “Change happens because people get engaged in the process.

“You’re already engaged in the process and this is how we make societies more equal and more harmonious for all.”