John Geddes: The PM's meeting with the VP looked like it would be strained, but the plight of two Canadians detained by Beijing created an opening 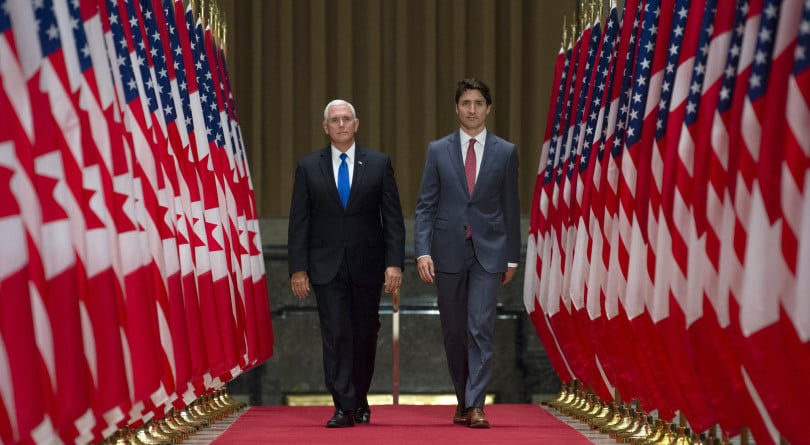 Trudeau and Pence make their way to a joint news conference in Ottawa on May 30, 2019. (Adrian Wyld/CP)

Nobody expected a show of mutual affection when Justin Trudeau met in Ottawa today with U.S. Vice-President Mike Pence. Any possible common ground between the conservative from Indiana and the progressive from Montréal remains undiscovered territory. Setting a particularly prickly tone, the Prime Minister declared in advance that he’d be raising recent U.S. “backsliding” on abortion with the staunchly anti-abortion VP—an odd issue to put on the agenda since it’s hardly a bilateral file.

So, when Trudeau and Pence walked together into the Sir John A. Macdonald Building, a restored historic bank branch just off Parliament Hill, for this afternoon’s joint news conference, expectations weren’t high.

The last time a U.S. vice-president was in that same all-purpose federal space was when Trudeau feted Joe Biden there with a formal dinner near the end of the Barack Obama administration in late 2016. Biden spoke about Trudeau that night as a fond uncle might a promising nephew. Today wasn’t going to be like that.

Yet it turned out not to be merely a chilly obligation either. The top file of the day was supposed to be Pence’s push, on President Donald Trump’s behalf, to persuade Congress to pass the new U.S.-Canada-Mexico trade deal. He and Trudeau dutifully talked up the agreement’s mutual benefits. As well, they discussed their shared desire for Venezuelan President Nicolas Maduro to give up power, although Pence denounced Cuba’s influence in Venezuela and Trudeau expressed optimism that Havana could be coaxed into playing a constructive role in the country’s prolonged crisis.

All that was far less interesting, however, than what Pence had to say about Canada’s deep diplomatic rift with China.

Canadians who follow the news even a bit know the basic background. Late last year, Canadian authorities detained Meng Wanzhou, a top executive at Chinese telecom giant Huawei, at Washington’s request. The Americans are seeking her extradition to face fraud charges in the U.S., but the Chinese government demands that she be released without going through the normal court process. After Meng’s arrest in Vancouver, China detained two Canadians, former diplomat Michael Kovrig and independent businessman Michael Spavor, quite unexpectedly.

READ MORE: Who’s going to stand up to China? This Canadian senator, for one.

Securing their release now ranks as the most pressing diplomatic preoccupation of the Liberal government. But Trudeau doesn’t seem to be getting anywhere with Beijing. He hasn’t discussed the issue with Xi Jinping; if he tried, experts doubt the Chinese president would agree to the conversation.

Earlier this week, Foreign Minister Chrystia Freeland told a House committee she’s eager to meet with her Chinese counterpart on the matter—but isn’t optimistic. “It is our understanding that in these situations,” she told the committee, “the Chinese practice tends to be—and Canada is not the only country that has found itself in this situation—the Chinese practice tends to be to hold off on meetings at the highest levels.”

Enter Mike Pence. Asked about the detained Canadians by reporters today, Pence said he and Trudeau spoke “extensively” on the file. Then he volunteered a commitment about the Group of 20 leaders’ summit coming up in late June in Osaka, Japan: “Let me say that President Trump will be travelling, along with the Prime Minister, to the G20 in the weeks ahead. We anticipate he will be meeting with President Xi there. We are in the midst of significant discussions over our trading relationship, but I can assure you in that context and going forward, we’re going to continue to urge China to release the Canadian citizens, even while we deal with the larger economic and structural issues between the United States and China.”

The way he framed that near-commitment that Trump will raise Canada’s concerns with Xi is worth pausing to note. It’s not like Washington and Beijing don’t have their own issues to hash out—starting with a hugely destabilizing trade war—but Pence said Canada’s preoccupation rates anyway. And it sure should. After all, Canada’s problem stems entirely from cooperating with a U.S. extradition request. “We respect and are grateful for the strong stance for the rule of law that Canada has taken with regard to the Huawei executive, and we’ll continue to engage on the issue,” Pence said.

Still, even on the China file, Trudeau and Pence weren’t quite in harmony. Pence’s answers stressed the two-way Canada-U.S. relationship throughout. Trudeau repeatedly framed his to broaden the field of view to include the whole world.

“We’re in a moment where like-minded nations like Canada and the United States, and many of our European and international partners, have expressed their dismay with the way China is stepping forward more assertively and, indeed, aggressively on the international stage,” he said. “And we are all standing together to ensure that the rules are followed, that our values are upheld, and that China understands that the economies and democracies of the West are united in our condemnation of these arbitrary detentions in attempt to gain political leverage.”

Despite the Trump White House taking pains to show a willingness to treat Canada’s concerns seriously, Trudeau clearly didn’t see any political advantage to highlighting the bilateral relationship. He’s learned that most Canadians detest this president: in all of 2018, Trudeau had no better moment in public opinion polls than when Trump denounced him after the close of the G7 summit in Charlevoix, Que.

Nothing like that happened today, of course. After their joint news conference, they simply went their different ways—Pence to visit Ottawa’s Beechwood National Military Cemetery, Trudeau to Montréal for a gala being held by the LGBT Chamber of Commerce of Quebec.