Sometimes the past is a funhouse mirror 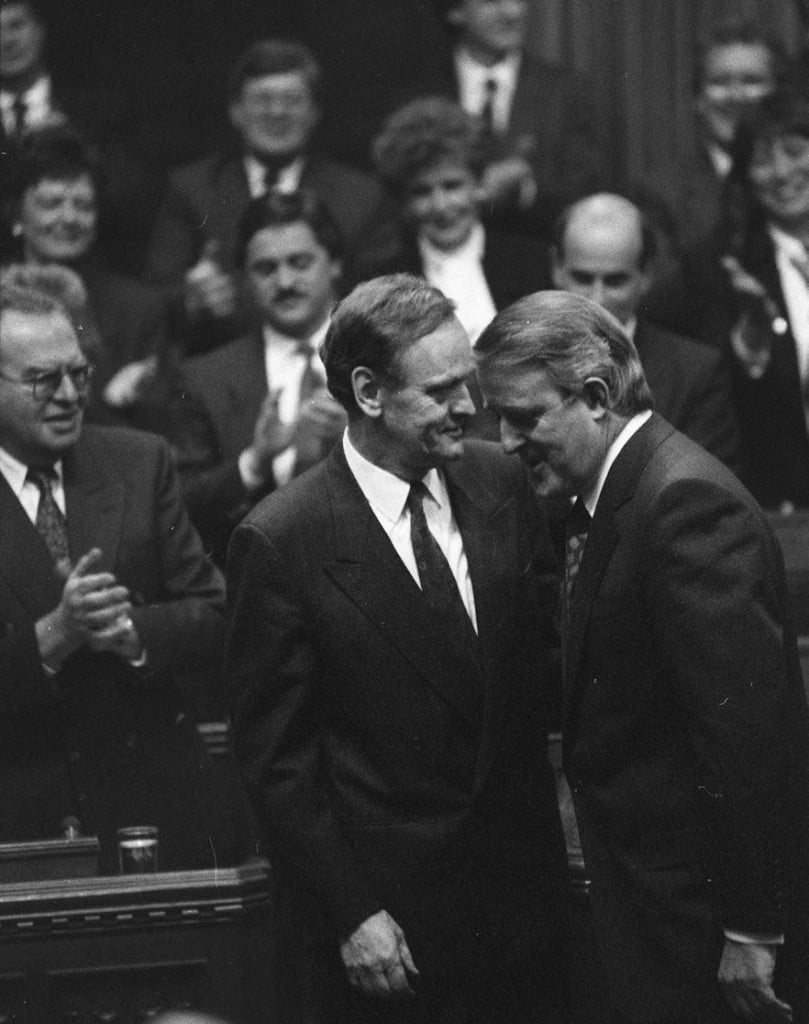 On Jan. 11, 1991, Gen. John de Chastelain, the Chief of Defence Staff, announced a substantial increase in Canada’s contribution to the multinational force building in the Persian Gulf in response to Saddam Hussein’s invasion of Kuwait. Reading the numbers from today’s perspective, the scale of the enterprise is surprising: de Chastelain announced 6 CF-18 fighters would join the 18 already in the region, along with a Boeing 707 refuelling jet, adding 130 to the 1,700-strong Canadian contingent in the theatre — on two destroyers and a supply ship, in a naval HQ in Bahrain and an impromptu airbase in Qatar.

Four days later the House of Commons debated a government motion: “That this House reaffirms its support of the United Nations in ending the aggression by Iraq against Kuwait.” A new MP arrived in the House that very day, just in time to take part in the debate: the winner of the by-election in Beauséjour, N.B., Jean Chrétien.

The Liberal Opposition leader, finally back in the House after five years away, took a surprising position.

“If there is a war, we think they will have to be called back,” he told the Toronto Star the day before the debate, referring to the huge fighting force then gathering strength.

“Really, Canadians have had enough of these ambiguities and playing the dice on the table without telling Canadians exactly what the situation is,” he said. “It is not the time to play with words. Should we have Canadians involved in war, yes or no? . . . The reality is, we’re debating war tomorrow, and our answer is no to a war at this moment.”

The idea that nearly 2,000 soldiers should be sent to the Persian Gulf until the eve of war and then brought home when the shooting started won Chrétien mixed reviews. But the most shocking rebuke came on the second day of debate, when John Turner, Chrétien’s predecessor as Liberal leader and eternal rival, gave a speech supporting the Mulroney government’s motion. “If the alliance against Iraq were to fall into disarray — from good intentions, from walking too many ‘last miles’ — the impact upon the future of the United Nations would be devastating to the future efforts of collective security,” he said. Chrétien sat with his arms folded and told reporters later he wished Turner had said some of this at a caucus meeting. The Progressive Conservatives were friendlier. They gave Turner a standing ovation. Many crossed the Commons’ centre aisle to shake his hand. Later Mulroney paused on his way up the stairs to his third-floor Centre Block office to tell the reporters and TV cameras that Turner’s speech was in the best tradition of the Liberal party.

After that, things started to happen rather quickly. Turner’s staff showed up at the former prime minister’s small, secondary Centre Block office on the day after his speech to discover that the locks had been changed. Turner was invited to consolidate his belongings in his main office in the Confederation Building.

Christopher Young, a Southam News columnist, logged his hunch that Chrétien in power would behave differently from Chrétien in opposition. “Whatever Jean Chrétien and Lloyd Axworthy say, it’s hard to believe that if the Liberals were in power, they would not support the U.S.-led, UN-sponsored coalition,” he wrote. “My guess is they would do what Brian Mulroney is doing, and what John Turner says Canada must do.”

But Young did not need to wait for an election to watch Chrétien swallow himself whole, because the final surprise in this little drama came when Chrétien voted in favour of the Mulroney motion he had mocked on the front page of the Star a week earlier. Four of his own MPs voted against the motion — that is, they voted in line with where their new leader had been, not with where he was now. (Turner was out of the House when most Liberals, including his leader, voted the way he had urged them to.) Chrétien insisted his position hadn’t changed: that with military action now inevitable, soldiers needed to know Canadians supported them. Warren Allmand, one of the Liberals who voted against the motion, wasn’t buying. “I feel the party has changed their position,” he said. “It’s up to them to rationalize it. I can’t.”

All of this happened nearly four years before I came to Ottawa to cover politics, but just reading along in the newspapers in Montreal, I thought: Wow, shaky performance. Five months later, Liberals who had backed Paul Martin for the party’s leadership convened privately for “Bitterness Weekend 1991,” the anniversary commemoration of their man’s defeat at the hands of a leader they saw as a doddering idiot. The flip-flip-flop on Iraq featured prominently in their complaints.

Two years after that, Jean Chrétien led the Liberals to victory in the next federal election, winning a comfortable majority while the successor to Brian Mulroney was left with two seats, neither of them hers.

History doesn’t repeat itself to the last detail, and usually it doesn’t come close at all. Surely it is impossible to predict the result of the next election from the way Justin Trudeau’s stand on Iraq today echoes Chrétien’s stand on Iraq then. But after he became prime minister, Chrétien backed the use of force by U.S. authorities, with and without a United Nations mandate, again and again, for as long as Bill Clinton was president and a while longer — in Iraq in 1998 (“If you don’t want to pay the price of maintaining peace, you will have a lot of war,” he told Winnipeg schoolchildren); in the former Yugoslavia in 1999; and in Afghanistan in 2001-02, when he authorized the largest deployment of Canadian troops since Korea. Near the end of his decade in office he opposed another U.S. military intervention, again in Iraq. People tend to focus on that and forget what came before.

I’d be astonished if Justin Trudeau hasn’t discussed all this with Jean Chrétien in the past couple of weeks. I wonder what the older man said. Perhaps that opposition and government aren’t the same job.