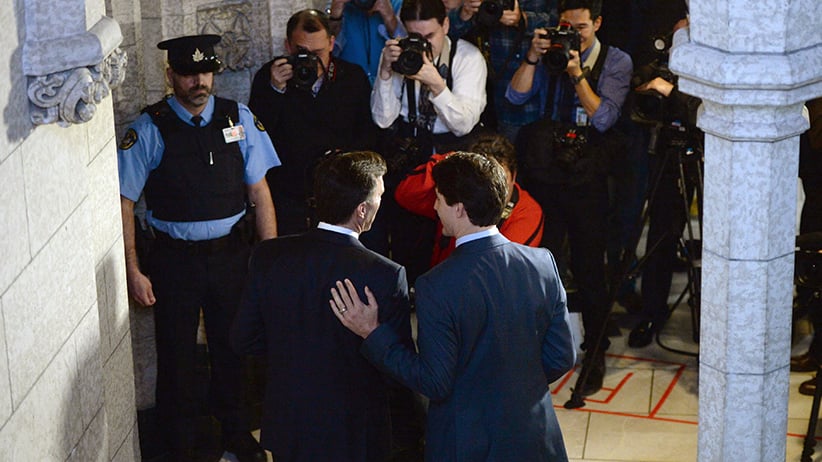 WASHINGTON — Canada has become a vocal member of the international anti-austerity clique, as the new Liberal government promotes the purse strings-loosening principles of its new federal budget to foreign audiences.

Trudeau placed himself squarely in the anti-austerity camp as he began a meeting with the host of the next Group of Seven summit, Japan’s Shinzo Abe.

“Shinzo, my friend,” the prime minister said as he arrived for the lunch meeting, with both leaders in Washington for a two-day nuclear safety conference.

“Japan and Canada are aligned in focusing on investment as opposed to austerity,” he continued, as they sat down. “I know there will be interesting and useful conversations around the table.”

Abe didn’t offer any public clues during Thursday’s meeting — but he called the sluggish economy his greatest challenge and vowed to use May’s G7 meeting to address it: “I would like to send out a clear message to the world on the occasion of the G7.”

Trudeau also defended the deficit-tolerant approach in a public forum at the U.S. Chamber of Commerce. The event moderator Susan Li pressed him on the new budget that projects deficits for the foreseeable future.

“We’re talking about a budget deficit of 1.5 per cent of GDP — which surprised a lot of people,” said Li, of the CNBC network. “That’s the largest budget deficit since the global financial crisis. But your philosophy is spend to grow.”

Trudeau replied: “It’s more about investing. Right around the world we’re seeing a debate between austerity and investment,” he said. “Quite frankly we’ve seen stalled global growth for too long. And it’s impacted not just on the countries’ bottom lines, but business as well.”

He said Canada has the lowest debt-to-GDP ratio in the G7, thanks to decisions taken since the 1990s. The federal debt is barely 30 per cent of the national economy. Interest rates are low. Now’s the time to invest in infrastructure spending and offer middle-class tax cuts, he said.

It’s true that Canada has a lower government debt load than other G7 countries, with the possible exception of Germany depending on how it’s calculated and whether provincial-state-local governments are included.

It’s also true that it’s only a fraction of the debt-bomb Japan is lugging around — at more than 230 per cent of GDP and on-track to eventually explode to triple the size of the national economy.

But Canada has its debt issues too, once provincial governments are taken into account. The OECD puts Canadian governments’ general debt at 108 per cent of the economy _ and higher than two-thirds of the developed countries. Economists have expressed more concern about personal household debt, which has hit record highs.

Trudeau’s predecessor spoke often about controlling spending. Harper’s message was aligned with his counterparts Angela Merkel and David Cameron, even while he also ran a deficit.

In a speech to British parliamentarians in 2013, at a time when his government was returning to budgetary balance, Harper said: “In many countries, there is a considerable debate between austerity and growth.

“Let me tell you, it is a false dichotomy. You need good measures of both. Countries that do not bring their finances under control or that close their economies to the world, will face consequences.”

Trudeau will attend bilateral meetings Friday with the British prime minister, and with Indian PM Narendra Modi. They’ll also take part in international discussions on protecting nuclear materials. Trudeau will close out his Washington trip with an early-evening news conference.