Group of first responders will visit Ottawa to call for national strategy to help paramedics, firefighters, police officers and veterans 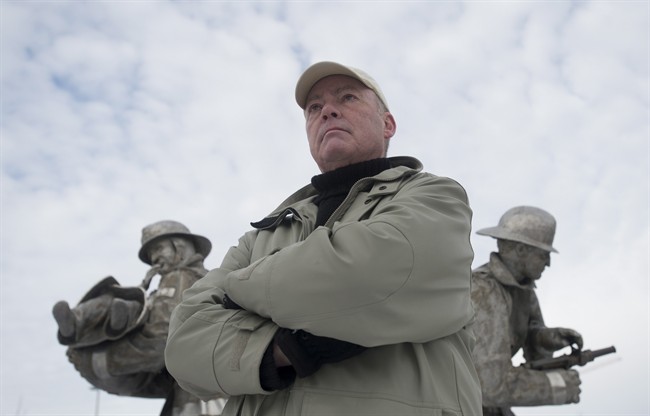 Former firefighter Norman Traversy poses for a photo at a firefighters memorial Tuesday, January 17, 2017 in Ottawa. Traversy, a former Mississauga firefighter with PTSD, is supporting a private member’s bill that would create a national framework to track the disorder. THE CANADIAN PRESS/Adrian Wyld

As a young paramedic in Barrie, Ont., Harris went to bed dreading her next nightmare. Nearly every night, she says she bolted upright screaming and drenched in sweat. In the morning, she sat frozen in panic, unable to put on her uniform.

“I’d be crying and crying … I couldn’t control it and I didn’t know why,” she recalled. “I wished I had a broken leg. If I could’ve just had something that was fixable and explainable, then my recovery would have been a lot easier.

“Eventually, suicide was my only option to get away from the terror in my mind.”

Harris now knows she suffers from post-traumatic stress disorder because of the many disturbing calls she responded to during her career, including a blood-soaked motel room where a man had fatally slashed the throats of two women and tried to kill himself.

Next month, Harris will join a group of first responders and families in the House of Commons to call for a national strategy to help Canadian paramedics, firefighters, police officers and veterans who are in crisis.

British Columbia MP Todd Doherty has introduced a private member’s bill that would create a framework to track the disorder, establish guidelines for diagnosis, treatment and management, and would create education materials to be used by public health providers. It is set for second reading Feb. 9.

Doherty said he had spoken with hundreds of veterans and first responders with heartbreaking stories, as well as family members whose loved ones have died by suicide.

“I fear that if we don’t do something, at all levels, we’re going to lose more,” he said.

Scott Bardsley, a spokesman for Public Safety Minister Ralph Goodale, said the government is working on a plan to address post-traumatic stress injuries. It has consulted with provinces, territories, public-safety officers and health-care practitioners, he said.

Consultations have emphasized the need for prevention and early intervention, more research and awareness, the reduction of stigma, and an enhanced support for diagnosis, care and treatment, he said.

“We promised Canadians renewed federal leadership on post-traumatic stress injuries,” he said in a statement, adding the government will formally respond to Doherty’s bill at second reading.

A national strategy should also include increased funding for psychological care, said Vince Savoia, the founder of the Tema Conter Memorial Trust. The trust is named after the woman whose murder he responded to as a young paramedic in 1988.

Since 2014, 183 Canadian public safety and military personnel have died by suicide, according to statistics kept by the organization. This year, already three first responders and one veteran have killed themselves, including Lionel Desmond of Nova Scotia, who shot and killed his wife, daughter and mother before shooting himself.

“We have a massive problem,” Savoia said.

The organization produces its statistics through direct reporting from families and colleagues of the deceased and requires three sources to confirm a death, he said.

Norman Traversy, a former Mississauga firefighter who will back Doherty’s bill next month, said he was bullied after he was diagnosed with PTSD.

He provided to The Canadian Press a photograph of a sign that said “Caged Animal” that he alleged was placed above his cubicle.

“I was totally humiliated and embarrassed,” he said.

Lindsay Noronha, a spokeswoman for the City of Mississauga, declined to discuss the terms of Traversy’s employment, which ended seven years ago. But she said the mental health of firefighters has always been a top priority and it recently introduced a new preventative program.

One reason some first responders want a federal framework is because workers’ compensation legislation is inconsistent between provinces.

RELATED: Could ecstasy be a potential treatment for PTSD?>

Last year, Ontario updated its legislation to presume that PTSD is a workplace injury among first responders, a move already undertaken by Manitoba and Alberta. British Columbia still requires people applying for benefits to prove that their PTSD was caused by their job.

Shane Simpson, an Opposition NDP member of the B.C. legislature, wants to change that. He plans to reintroduce a private member’s bill to update the law.

Labour Minister Shirley Bond said the province’s legislation is among the broadest in Canada and includes coverage for work-related mental disorders, including PTSD.

“These statistics reflect a significantly higher percentage of allowed claims for mental disorders for first responders as compared to all workers,” said Jennifer Leyen, director of special care services.

Bob Parkinson of the Ambulance Paramedics of B.C. said the province’s drug-overdose crisis has put more strain on an already pressured workforce.