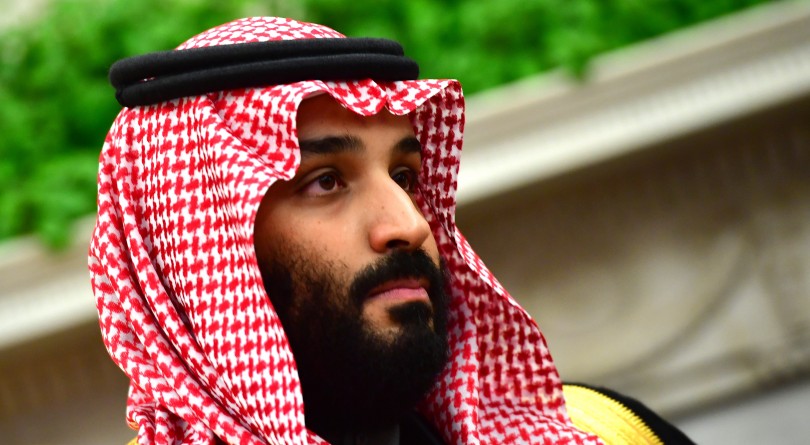 Crown Prince Mohammed bin Salman of the Kingdom of Saudi Arabia is seen during a meeting with President Donald Trump in the Oval Office at the White House on March 20, 2018 in Washington, D.C. (Kevin Dietsch-Pool/Getty Images)

Veteran Middle East-watchers are interpreting Saudi Arabia’s over-the-top response to a plea from the Canadian government for the release of imprisoned human rights activists as Crown Prince Mohammed bin Salman’s bid to warn off any foreign power that dares take aim at his handling of internal dissent.

Bin Salman, 32, who is often referred to as MBS by admirers and critics alike, has rapidly consolidated his position as Saudi Arabia’s most powerful ruler over the past few years, styling himself as a liberalizing reformer, but showing what his detractors see as worryingly autocratic tendencies, even by Saudi standards.

“He may be doing some economic and social reforms, but he’s doing them within the context of a pure autocracy,” said Barbara Bodine, a professor at the Institute for the Study of Diplomacy at Georgetown University in Washington and a former U.S. ambassador to Yemen. “This is a guy who has pulled into his own hands almost every lever of economic and political power in his country.”

Rex Brynen, a political science professor at McGill University in Montreal and a former long-time consultant to the Canadian government on Middle East issues, sees MBS in much the same light. “Undoubtedly in terms of modernizing the Saudi economy he’s doing some good stuff,” Brynen said. “In terms of clipping the wings of some, not all, of the religious conservatives, that’s probably positive. In terms of his decision-making style, though, I think that’s deeply destabilizing for the region.”

Bin Salman is likely the most closely watched figure in the Middle East today, and Canada’s unexpected part in his unfolding story started when Foreign Minister Chrystia Freeland tweeted that Canada is “gravely concerned” about recent arrests of activists in Saudi Arabia, including Samar Badawi, the sister of Raif Badawai, who was already in prison for online criticism of Saudi religious authorities, and whose wife lives in Canada and recently became a Canadian citizen. “We urge the Saudi authorities to immediately release them and all other peaceful #humanrights activists,” Freeland said on Twitter.

READ MORE: The new most powerful man in the Middle East

Bodine described Freeland’s comments on the arrests as merely “right and proper.” However, Saudi Arabia lashed back by expelling Canada’s ambassador, calling its own home from Ottawa, announcing that Saudi students enrolled to study in Canada would be pulled out of Canadian schools and sent elsewhere, and cancelling its state airline’s direct flights to Toronto.

Brynen sees the sweeping response partly as a reflection of MBS’s style and partly as a message to other Western capitals. “He does seem very sensitive and very rash,” Brynen said. “In this case, he didn’t like the criticism and he decided Canada would make a great example. We’re not particularly important, we’re not part of the European Union, we’re not part of a big trading block, so why not make an example of Canada to deter criticism from any other Western country?”

Bodine said bin Salman’s apparent liberalizing reforms—including his widely reported lifting of the ban on women driving cars in Saudi Arabia—tend to be superficial.  “Even with the women driving thing, the week before it took effect he jailed all the women activists who had been pushing for it,” she noted. Rather than allowing dissent to be part of the narrative of Saudi reform, Bodine suggested, MBS aspires to be seen personally as the “bestower of reforms, bestower of rights.”

His leadership has huge implications beyond Saudi Arabia’s borders. Power in Saudi Arabia previously tended to be shared among competing royal family members, technocrats, business figures and religious leaders, creating a sort of informal, imperfect system of checks and balances. MBS is more clearly in sole control, and has been more assertive in the region, both in economic and military terms.

READ MORE: Why is Canada making arms deals with the Saudis?

He has also cultivated a close relationship with U.S. President Donald Trump, which might be a factor in his willingness to take such a hard line with Canada. The U.S. State Department adopted a scrupulously neutral posture in the dispute, with an official saying Canada and Saudi Arabia “need to diplomatically resolve this together.” According to Bodine, “MBS’s relationship is not with the State Department or even the Defense Department, it is straight into the Oval Office.”

Is it possible that leading politicians in other democracies might publicly line up behind Freeland in support of human rights? Neither Bodine nor Brynen were predicting any such show of solidarity, given the buying power of Saudi oil wealth. “The Saudis buy so much from so many people—that’s what’s going to hold people back from possibly providing public support,” Bodine said.

Indeed, Brynen said hitting Canada so unexpectedly hard might well prove to be a short-term win for Saudi Arabia. “I think countries will be much more reticent about saying anything about Saudi domestic stuff because they don’t want to be Canada-ed,” he said. “In that sense, the Saudis will already have succeeded.”

Still, Brynen pointed to a longer-term, potentially more problematic implication for the Saudis. Bin Salman is touting what he calls his “Vision 2030” plan for diversifying the Saudi economy away from oil production. But that plan relies on foreign investors seeing the kingdom as a reliable economic player. “If you’re trying to build the idea that Saudi Arabia is a great place to invest,” Brynen said, “this kind of unpredictable, rash behaviour is going to add to the risk factor.”