Canada steps up with a new NATO commitment 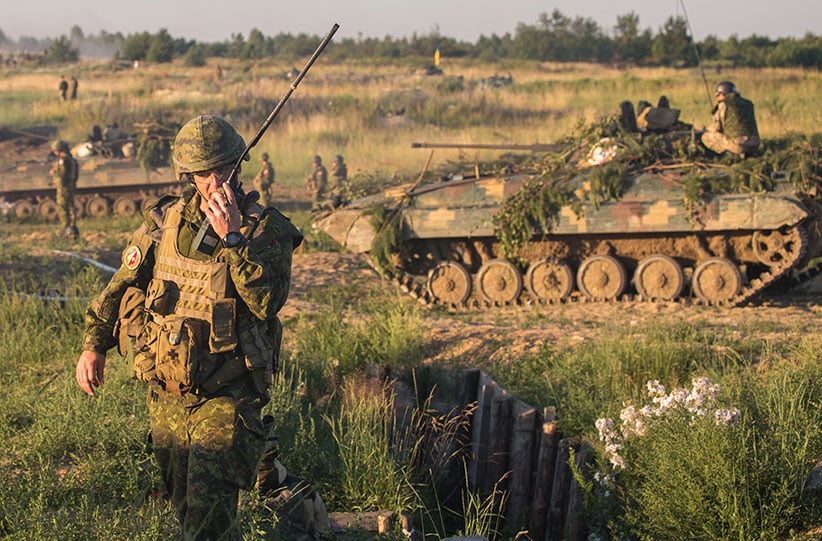 A Canadian soldier sends the signal to begin the simulated attack on a defensive position during a live firing exercise during Operation UNIFIER in Starychi, Ukraine on June 30, 2016. (Joint Task Force Ukraine)

At the NATO summit in Warsaw on Friday, Prime Minister Justin Trudeau announced that Canada will lead the alliance’s new battle group in Latvia. About 450 Canadian soldiers will serve as the core of a group of about 1,000, to be deployed indefinitely on Russia’s doorstep. Germany, the United States and Britain are leading similar forces in Lithuania, Poland and Estonia.

For insights on NATO’s move to assert itself in countries that have felt threatened ever since Russian President Vladimir Putin’s 2014 annexation of Crimea and aggression toward Ukraine, Maclean’s spoke with Stephen Saideman, a professor of international affairs at Carleton University in Ottawa, and author of Adapting in the Dust: Learning Lessons from Canada’s War in Afghanistan.

Saideman spoke with me by phone in the Polish capital, where he was following the summit. Read these edited excerpts from the interview or listen to the full interview below from our Maclean’s on the Hill podcast:

Q: Before we get into specific questions, what’s the general mood there, in your opinion?

Q: Let’s deal first with Russia. Canada is making a significant contribution to a battle group in Latvia. Could you put that in the context of the atmosphere surrounding Russia these days?

A: Well, there’s been some progress made since the last summit [in 2014 in Wales]. That last summit happened a couple of months after Crimea and after Russia started messing around seriously in the rest of Ukraine. There was a short period of time that they had to make real decisions, and there was a lot of division within NATO about whether anything that they did in the Baltics would be confrontational and provocative.

But over the course of the past two years, there’s been a lesson learned—that the provocateur is Putin. That was one of the common themes [in Warsaw]—that he is the guy provoking things, and actually, you know, tempting him by not deploying troops in a persistent or a permanent way is more provocative than putting a small number of troops.

Four thousand troops total is not really going to change the balance of power and threaten Russia with invasion. But it does provide a trip wire. So the idea is to create deterrence by putting these troops there.

Q: Just to focus on Canada, is our Latvian contribution seen there as significant contribution or a minor thing?

A: Well, the way this is being discussed is there are four framework nations, which are four leading countries that will play the role of providing headquarters troops and managing the operation within a particular country. So Canada gets Latvia; the United States gets Poland; the British get, I believe, Estonia; and the Germans get Lithuania.

Q: You mentioned the shadow the Brexit casts over this summit. We don’t always think about NATO in light of political developments, rather than strictly military ones. What’s the relationship here?

A: In Warsaw the question is, “Is this a part of a rising tide of populism toward all international institutions?” I think people here were exaggerating it to a certain degree because they are looking at the American election, and taking a look at Trump. But some polls recently have shown that the American people are still very supportive of NATO. Two-thirds, which is more than the combination of Bernie [Sanders] voters and Trump voters.

Q: Is there much talk in Warsaw about pressure from the United States for NATO countries like Canada to contribute more money to defence spending? (The official target is for countries to spend two per cent of gross domestic product on defence, but Canada spends less than half that portion of GDP.)

A: I think there’s some discussion of that, but I do think that the Canadian contribution to Latvia deflects some of that criticism. NATO Secretary General [Jens Stoltenberg] in his comments mentioned how the good news is that we’ve stopped the bleeding, that most of the countries in Europe are no longer cutting their spending; they’re increasing it.

Canada lucked out, by the way, in that this thing was discussed in terms of how Canada and Europe are increasing defence spending. Yes, if you include Europe; if you just look at Canada, we’ve been cutting. So Canada’s gotten a break, but it’s going to come back, because there are real questions about how Canada can sustain its military with us spending less than one per cent of GDP.

Q: Is that on the radar screen for our NATO partners? Do they know that we’ve don’t spend much, and also have problems completing major military procurements?

A: Oh, yes. The Europeans as well as the Americans are very well aware that Canada is at the bottom end of the spectrum on percentage of GDP. To be fair, though, if you look at total dollars spent, controlling for exchange rates and all the rest, Canada actually does fairly well.

A: Yes. NATO dropped a report that had all kinds of breakdowns on this. Canada actually spends a fair amount of money. It’s just that, because it had one of the largest GDPs, that it looks proportionately less. So it really depends on what you’re measuring.

And, you know, every democracy has problems on how it procures its [military equipment]. The question is whether Canada gets less bang for its buck because it mismanages procurement files. I’m not sure if that’s true compared to other democracies.

Canada has to ask itself in [the government’s current defence review] about we can get more out of the dollars we spend, because we have this thing—and it’s not a Liberal thing, it’s not a Conservative thing, it’s a Canada thing—about how badly we manage procurement, and how our politicians always seem to want to delay things, which also makes things more expensive.