Canada, TPP members agree to revised deal without the U.S.

The trade deal comes after Trudeau surprised some by not signing an agreement at TPP talks in Danang last year, holding out for further negotiations. 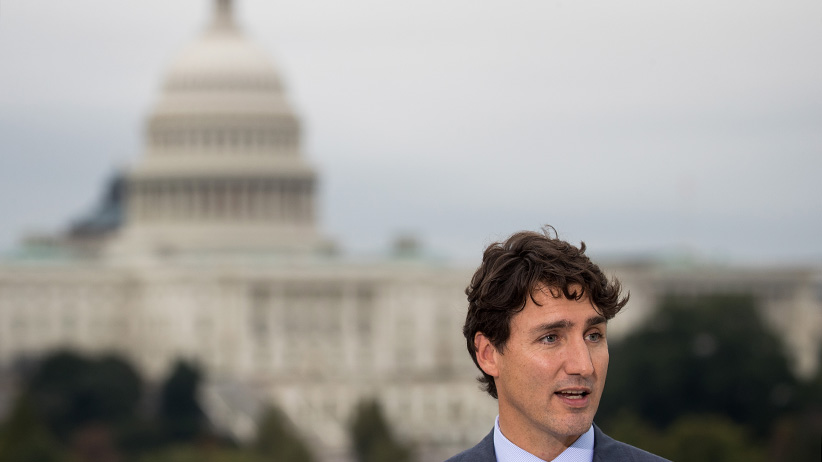 Prime Minister of Canada Justin Trudeau speaks during a press availability at the Canadian Embassy, October 11, 2017 in Washington, DC. Earlier in the day, Prime Minister Trudeau met with U.S. President Donald Trump, where their talks were expected to focus on the North American Free Trade Agreement (NAFTA). (Drew Angerer/Getty Images)

OTTAWA—Canada and the remaining members of the Trans-Pacific Partnership agreed Tuesday to a revised trade agreement without the United States.

The deal, confirmed by Singapore’s government, follows two days of high-level talks in Tokyo between Canada and the 10 other remaining TPP economies. The partners will now work toward signing the agreement by early March, Singapore’s trade and industry ministry said in a statement.

The deal was announced just hours after a Canadian government official said Ottawa was optimistic that a revised TPP pact would be reached as early as Tuesday.

READ MORE: Canada will not be rushed into signing TPP, says Trudeau

The official, who spoke on condition of anonymity, told The Canadian Press that Ottawa believed a deal could be struck, even though it would still like to see more progress on negotiations surrounding the automotive and cultural sectors.

Canada, the second-largest economy among the TPP partners, was widely considered the main holdout in the negotiations.

The Tokyo talks were the first high-level talks since the leaders of the TPP economies met in November on the sidelines of the APEC summit in Danang, Vietnam.

Prime Minister Justin Trudeau made international headlines there by deciding not to sign an agreement-in-principle on what has become known as TPP11.

Trudeau’s decision in Vietnam to continue negotiating for a better deal, rather than striking an agreement, led to the abrupt cancellation of a TPP leaders’ meeting in Danang.

Many believed the original TPP took a fatal blow when Donald Trump withdrew from the deal in one of his first acts as U.S. president.

The TPP agreement was reached as Canada faces a tough renegotiation of the North American Free Trade Agreement. NAFTA negotiators from Canada, the United States and Mexico are meeting in Montreal this week.

The government official said Trudeau had been bringing up the Asia-Pacific trade pact in recent months every time he’s had conversations with leaders from the other partner economies. Over the last week, he discussed the deal with the leaders of New Zealand and Chile by phone.

Trudeau also dispatched well-connected Vancouver Economic Commission chief executive Ian McKay as his personal envoy at this week’s negotiations in Japan, the official said. McKay, a former national director of Trudeau’s Liberal party, has “deep knowledge” of business in Japan and was engaging with the Japanese government at the highest level, they added.

McKay joined Canada’s chief and deputy chief TPP negotiators in Tokyo for two days of talks that were scheduled to wrap up Tuesday.

Many of those leaders thought an agreement-in-principle was within reach in November.

Trudeau made international headlines at the Asia-Pacific Economic Co-operation summit in Danang deciding not to sign an agreement-in-principle on what has become known as TPP11. Partner economies had been expecting him to come to an agreement.

He also made headlines at the summit for how he went about declining the deal.

Trudeau’s decision to continue negotiating for a better deal, rather than striking an agreement, led to the abrupt cancellation of a TPP leaders’ meeting on the sidelines of a summit.

The cancellation set off a confusing day of talks. Media reports directly blamed Canada and Trudeau for helping to scuttle the scheduled meeting.

But Trudeau later argued he had sent signals for days that he would not be rushed into a deal unless it was the right one.

TPP trade ministers did agree to a number of changes to nudge negotiations closer to a deal, including stronger protections for the environment and labour rights. They also suspended controversial provisions from the original TPP related to intellectual property, which the Canadian tech sector had long called on Ottawa to remove from the deal.

The pact was also rebranded the Comprehensive and Progressive Agreement for Trans-Pacific Partnership.

Most importantly, the deal would open up access for Canada to Japan’s economy, the third-largest in the world. Canada’s agricultural, seafood and forestry sectors would see some of the greatest benefits, the official said.

“We’ve made real progress both before and since Danang,” the official said.

A spokesman for Champagne wrote in an email late Monday that the government is trying to get the best deal for Canadian workers and businesses.

“As success will be determined over decades, it is important to get the details right,” Joseph Pickerill wrote.

“We are committed to being constructive, expeditious and ambitious towards that aim and are working collaboratively with our partners to this end.”