Canada's awful relations with China. Now there's a committee for that.

Politics Insider for Dec. 11: Democrats deal Trump a blow, Democrats give Trump a deal, and what's the deal with Canada's kid gloves approach to China 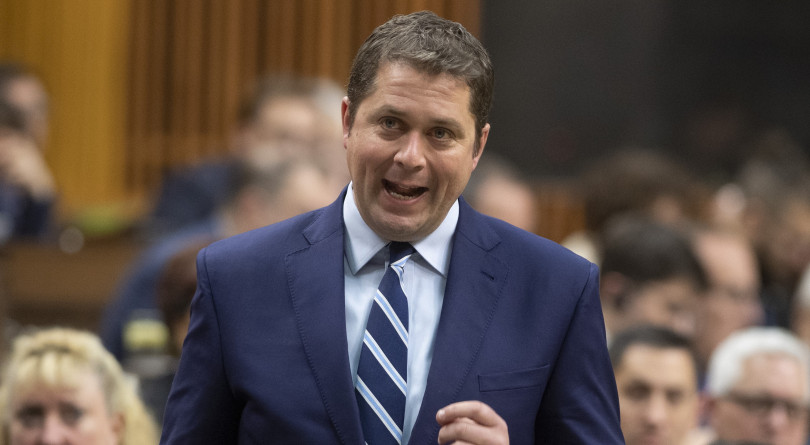 Leader of the Opposition Andrew Scheer rises during Question Period in the House of Commons Tuesday December 10, 2019 in Ottawa. (Adrian Wyld/CP)

‘We must act;’ Democrats unveil Trump impeachment charges:  It’s happening. After weeks of political wrangling and testimony, House Democrats announced two articles of impeachment  against President Donald Trump on Tuesday, one accusing him of abuse of power and the other, obstruction of Congress. “We stand here today because the president’s abuse of power leaves us with no choice,” said Chairman Adam Schiff of the Intelligence Committee. “WITCH HUNT!” retorted Trump.

Meanwhile, after being stalled for months, Chrystia Freeland signed a revised USMCA/CUSMA deal with the U.S. and Mexico. “All of us together have finally accomplished what we set out to do at the very outset: a win-win-win agreement which will provide stability for workers in all three of our countries for many years to come,” she said at the signing ceremony in Mexico. Here’s a look at what changes the Democrats succeeded in making to the deal, including preventing companies from dodging sanctions by refusing to participate in dispute-settlement panels, and a committee to monitor Mexican labour reforms.

NAFTA, Impeachment: A Donald Trump doubleheader: To help make sense of what a topsy-turvy day Tuesday was, Allen Abel looks at how it was really the best of times and the worst of times for the U.S. president:

Announcement of the replacement for what Trump often has called “the worst trade deal in the history of the world” came on the same morning of the same day that the same Madame Speaker – using the word “solemn” twice in her first sentence – announced the two specific, alleged “high crimes” for which the president will be tried and quickly acquitted by his cowed Republican allies in the U.S. Senate next month.

During any other presidency, such a contradiction would be considered dizzily discombobulating, but this is Trump. Adding to the vertigo, the president capped this bestest awfulest day by gaggling in the Oval Office with Sergei Victorovich Lavrov, the amiable foreign minister of Russia, which got America into this mess in the first place.

Trump then flew to swing-state Pennsylvania for a rally with the deplored. Read more ››

Die another day: One day of confidence vote down, one minority government still in power.  A series of votes on supplementary spending estimates got the backing of the Bloc and NDP, while the Conservatives voted en masse and in futility against the motion.

Canada’s China question: But the Conservatives came away from Tuesday with a big win of their own. With the support of the other opposition parties the Conservatives passed a motion to create a special parliamentary committee to examine Canada’s relations with China, and it will require Foreign Affairs Minister Francois-Philippe Champagne, Public Safety Minister Bill Blair and Canada’s ambassador to China, Dominic Barton, to show up as witnesses “from time to time as the committee sees fit.” And unlike during the Trudeau government’s first term when it still had its majority, the Liberals won’t be able to control this committee, since it will have six Liberals, four Conservatives, one Bloc Quebecois and one New Democrat, but one of the Liberals will serve as the chair and only vote to break ties.

Keeping up appearances: The creation of the new committee came the same day a Chinese foreign ministry spokesperson said the cases of two Canadians arrested last year are being transferred to “prosecutorial authorities for investigation and prosecution.” Michael Kovrig and Michael Spavor were seized exactly one year ago yesterday in retaliation for Canada carrying out a U.S. arrest warrant on Chinese telecom executive Meng Wanzhou. Three things could happen — prosecutors proceed with an indictment, send it back for more investigation or reject the case. “At this point, China probably has to maintain the facade that this is a legal issue,” human rights advocate Michael Caster told the Globe. “But they may have come to the conclusion that it has reached its course and is doing more harm than good. The best way to resolve it without admitting it was a sham all along would be to hold a trial and convict them but to then kick them out of the country.”

We must invoke Magnitsky sanctions against China: Senators Leo Housakos and Thanh Hai Ngo write that they will be introducing a motion in the Senate that calls on the Canadian government to take a principled approach in dealing with China:

As parliamentarians, it is our job to hold government to account not just on domestic matters but also in our responsibilities as part of the larger international community. That’s why we will be introducing a motion in Senate that calls on the Canadian government to take a principled approach in dealing with China.

That approach starts by confronting and sanctioning both Chinese and Hong Kong officials who violate human rights, the principles of fundamental justice and the rule of law, by levelling the Magnitsky law sanctions on them in relation to the ongoing protests in Hong Kong and the ongoing detention of minority Muslims.

It’s time for Canada to stand up to China. We are either defenders of democracy and rule of law, or we are not. We have not hesitated in invoking Magnitsky sanctions against Russia, Venezuela, Myanmar, South Sudan, and others. Why should China be any different? Read more ››

Don’t hold back: Help us better understand what you’d like from the Maclean’s Politics Insider newsletter. This short survey will only take a few minutes to complete. We really appreciate the feedback.