Why Kim Campbell has emerged, decades after her brief stint as prime minister, as a key political voice among young Canadians 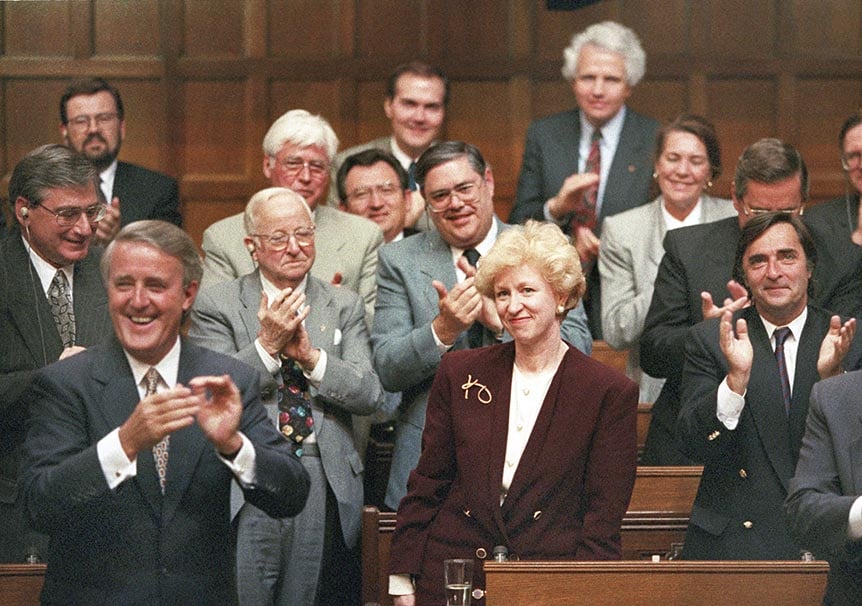 Jokes about vibrators, photos of Leo the poodle, a jab at Donald Trump’s “man-boobs” and small hands—not the type of pronouncements one might expect from a former head of government. But Kim Campbell, Canada’s first and only female prime minister, produces a stream of such retweets and commentary via her social media feed.

“Gag me with a spoon!” Campbell gleefully posted to her now-20,000 Twitter followers this winter in response to rumours the U.S. administration was considering Sarah Palin for U.S. ambassador to Canada. “:) Valley girl!” she followed up, possibly a nod to her tenure as consul general in Los Angeles.

That posting in southern California came after a crushing electoral defeat in 1993 saw her Progressive Conservatives reduced from a majority government with 154 seats in the House of Commons to a minuscule caucus of just two. After inheriting the reins from a retiring Brian Mulroney, Campbell never governed with a mandate and held power only four months. She accepted the L.A. posting in 1996 and largely disappeared from the public eye for 18 years.

Campbell’s legacy could easily have become a footnote.

Even Prime Minister Justin Trudeau appeared to forget her this June, telling an American talk show Canada was “long overdue” for a female PM. (His press secretary later explained he did, in fact, remember.)

Yet Campbell has recently resurfaced as a political commentator and, even stranger, an unlikely favourite among millennials who seem to appreciate her unrestrained, straight-talking style. She’s even the subject of a BuzzFeed listicle—that harbinger of cool—titled “16 times Kim Campbell was a Canadian treasure on Twitter.”

At an Ottawa gala one evening this spring, young women clamoured for a selfie with the former Canadian PM, following her rousing speech in the House of Commons on International Women’s Day.

Campbell sits on the board of Equal Voice, an organization that encourages more women to enter politics. It hosted an event known as Daughters of the Vote, which filled all 338 seats in the House of Commons with young women.

“People from every political stripe were obsessed,” said Michaela Glasgo, a delegate from Medicine Hat, Alta. Campbell returned to the floor of the House that day for the first time since dissolving Parliament in 1993, the year Glasgo was born.

“It was always buzzing when she was there. People wanted their picture with her, they wanted to talk to her… it was like the Queen was entering.”

She was humble about her many accomplishments, Dubeau said, and inspired her to run for a seat on her village’s town council. “She is very down-to-earth. She’s like, ‘Girl, you can do this,’ ” Dubeau said.

Campbell is a private citizen whose former Progressive Conservative party no longer exists. She can say whatever she wants, though generally refrains from commenting on Canadian politics. She returned from California in 2014, living part-time in Vancouver and part-time in Edmonton to take on the job of founding principal at the University of Alberta’s Peter Lougheed Leadership College.

In July, Campbell, who also once served as justice minister, was reaffirmed as chair of the advisory board charged with advising the prime minister on the next Supreme Court justice. She told the Globe and Mail her public comments have no impact on her duties in that role and that she is fastidious about remaining non-partisan—though she did once call Andrew Sheer “an ass” for tweeting his support for Brexit before he was party leader.

Campbell, 70, started out as a political science professor in the 1970s. She understands getting through to young people. She tweets what she finds informative, relevant or funny. “Laughter is a great pedagogical device,” she said in a recent interview with Maclean’s. “It creates a sense of warmth and togetherness and ‘we feeling’ that enables you to communicate effectively. If I didn’t have a sense of humour, I’d have been in a padded cell years ago.”

Now, she said, she advocates not for any particular platform but for democracy, good government and participation in politics, especially among women. “I really felt I wanted to reconnect in Canada and I’m delighted the timing seems to work for people to take some inspiration and pleasure from what I did and my being prime minister,” she said.

Justin Burton, a 32-year-old “conservative nerd” and founder of Future Conservative Party Leaders organization, picked up Campbell’s memoir, Time and Chance: The Political Memoirs of Canada’s First Woman Prime Minister, last week. Most of today’s recent international headlines involve powerful female leaders: Angela Merkel, Theresa May, Clinton. That made Burton want to remind Canadians they had a powerful female leader of their own. Plus, she’s hilarious, he said.

“If Mulroney made jokes like that, people would clench up. But Kim Campbell can do it because it’s authentic. Millennials are clamouring for this. Authenticity is an important trait in politics.”

If that seeming openness and originality is what draws millennials to Campbell, those characteristics may have been liabilities in the past.

Campbell was seen as edgy—the former justice minister famously posed for a photograph holding her lawyer’s robes on a hanger, bare shoulders shockingly visible—when most voters and party faithful were used to the staid, middle-aged man archetype.

“The unpredictability of a new political character people hadn’t seen before perhaps made them uncomfortable. She was certainly unique at the time,” said Tim Powers, vice-chairman of Summa Strategies, who was in the war room during the 1993 campaign and at its wake. “There’s a sense of originality to her that isn’t as manufactured.”

She’s always had an “’I don’t give a s–t’ factor,” Powers said. “She’s more direct and not as fussy about formality.” Two decades ago, that may have led to criticism she “lacked discipline” and “lacked focus.” Now that posture has political currency of its own.

People like Robert Burroughs, a 25-year-old lobbyist in New Brunswick, knows more about her persona now than her time in government. “I knew she was PM for a hot second,” Burroughs said. He likes her “cool mom” attitude, which amounts to, he said, “‘What are you going to do, fire me? You already did.’ ”