Canada's knowledge economy: not so much

Ottawa's bright ideas haven't added up to much result

It’s always good to compare hope against achievement. One of the first big things the Harper government did after it had delivered on (four of) its five election-year priorities in 2006 was to release, in 2007, its Science and Technology Strategy. Our text today comes from that document — especially this paragraph, which came in its own little box to show how important it was:

“At a time when Canada’s overall productivity gains are below those of other trading nations with whom we compete, the need to encourage greater private-sector S&T investment is a national priority.”

Got it. And how’s that working out? Today Industry Canada’s Science, Technology and Innovation Council released its second benchmarking report, two years after the first. This compares Canada’s performance on various research and innovation-related measures to global trends. And today’s report is pretty brutal. On the specific “national priority” I quoted above, here’s the tale of the tape:

“From 2006 to 2009…Canadian business expenditure on R&D declined in inflation-adjusted terms.”

But that’s just the beginning of it. As the Globe wrote this morning based on a leaked copy of the report (sigh), “Canada ranked worse or stagnated in 18 of 24 benchmarks tracked by the council since its 2008 report.” Here, through the magic of cut-and-paste, is what that looks like on paper: 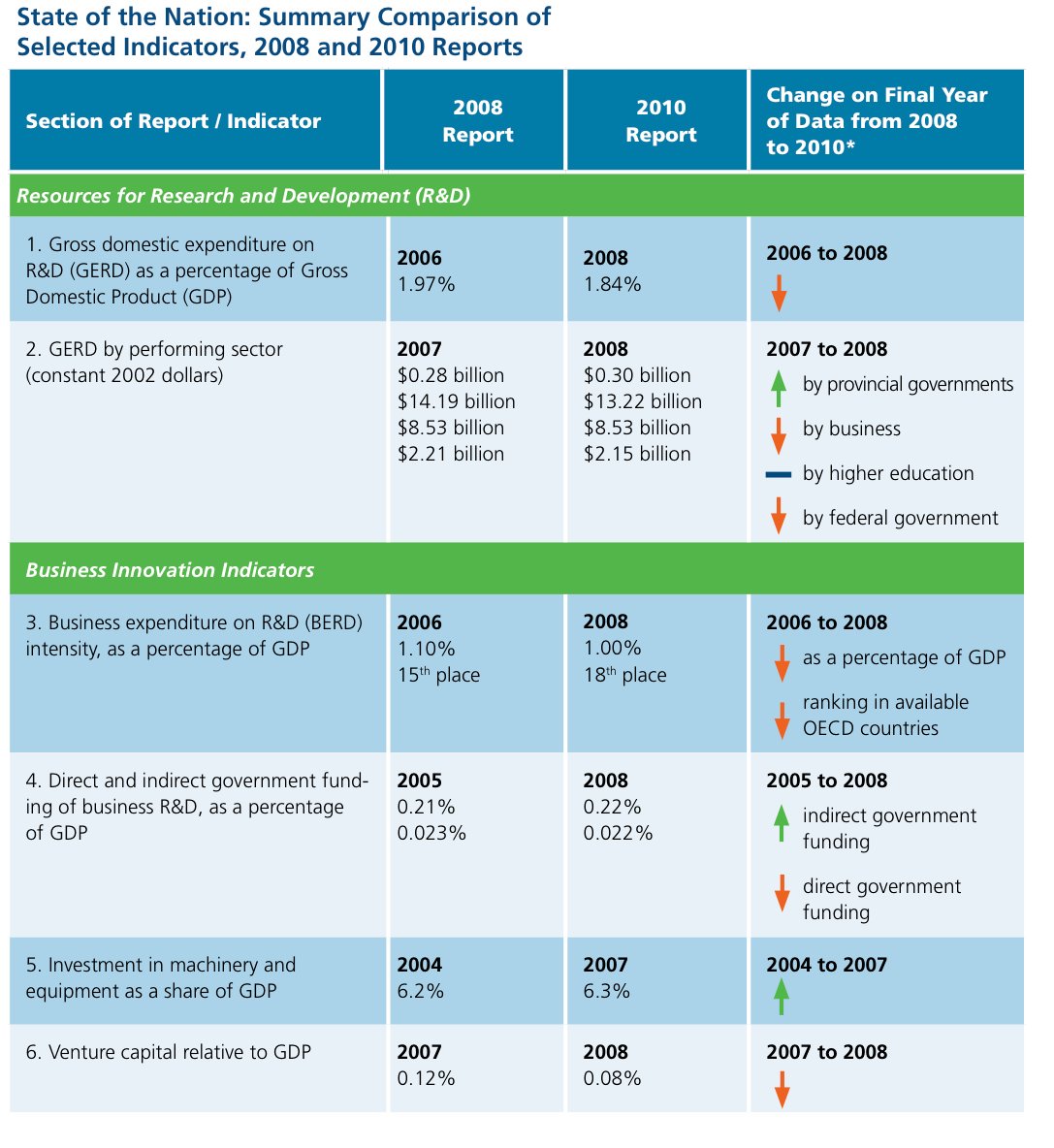 There’s a second page of those down arrows in the report after this one.

Business spending on R&D took a big hit when the tech bubble popped a decade ago, but after that it held steady until, well, about the time the Harper government released its science and technology strategy:

It’s not really fair to say that trend line is the government’s fault. Closer to the truth to say the feds’ bright ideas haven’t added up to much result. One of their biggest ideas is to support private-sector research through tax incentives. We do more of that than just about anyone: 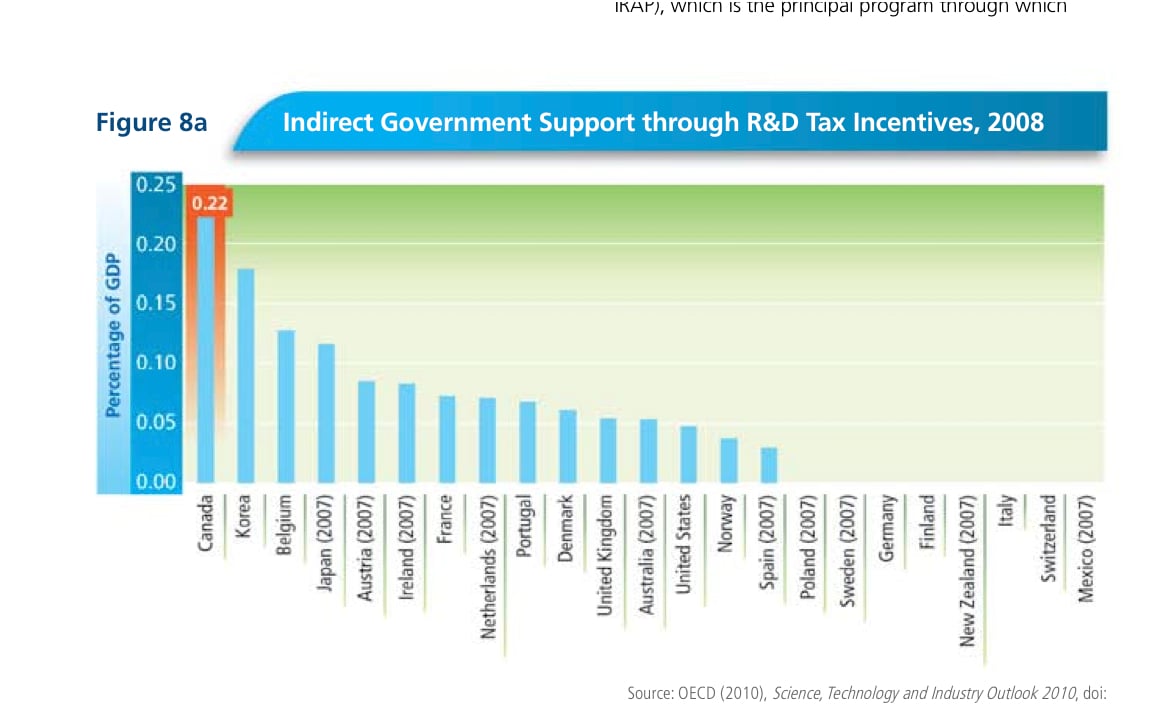 Other countries prefer to just give tax money to companies that perform a lot of research. We’re allergic to that kind of thinking in Canada, so the chart for direct national-government spending on private-sector research looks like this: 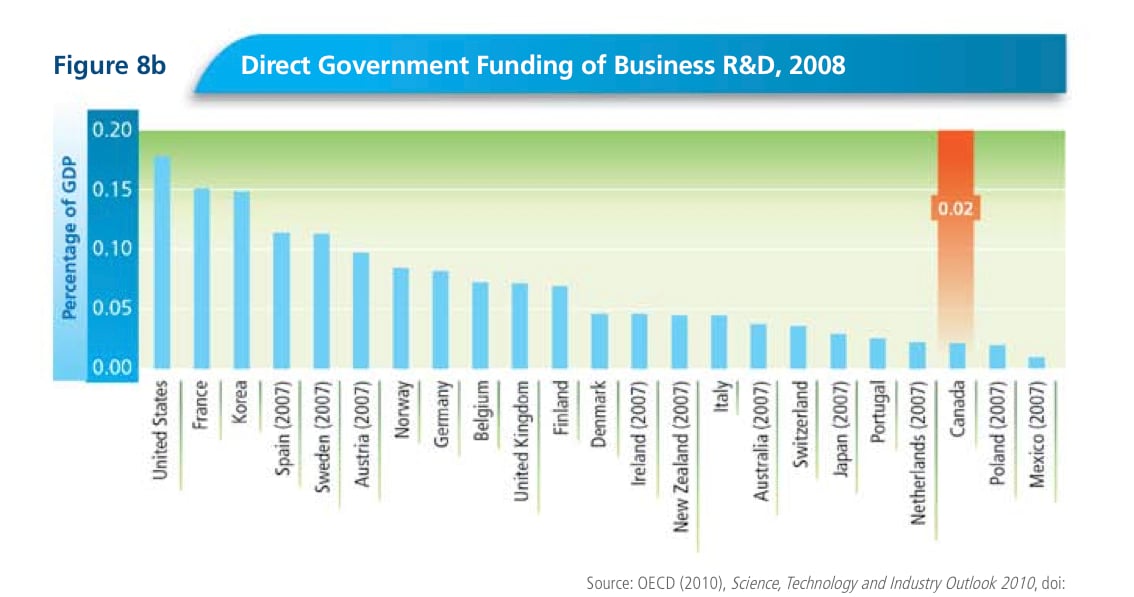 But since the point of supporting private-sector research is to produce more private-sector research, and not just to show up in a flattering place on a chart, it’s pretty clear that Canada’s preference for tax incentives over direct subsidy doesn’t work. Is another mechanism likely to do better? That question has been put to another panel, whose chairman is the very bright Tom Jenkins, and which is expected to report this autumn. Since we’re talking about billions of dollars a year in federal support to private-sector R&D, it’ll be handy to know whether it’s being well spent.

Meanwhile, of course there’s a lot of ways that a country turns ideas into commerce. One is to have a well-educated population in general. Canada has slipped, from very high to only rather high, in the OECD’s “PISA” standardized tests of 15-year-olds. Another is to have a large cadre of superbly-educated graduates. Here, Canada’s numbers are misleading: we lead the world in “tertiary education,” but that’s just because of a disproportionate number of community-college grads. We’re much lower in university education. And, indeed, we’ve fallen from 20th in the world to 23rd in our production of PhD graduates.

Finally, there’s managerial capacity. Roger Martin at the University of Toronto has argued, rather frequently, that business acumen is part of the productivity puzzle. Which is why I was so struck by this last chart, tucked away in today’s STIC report: