Why bilingualism needn't be a qualification to be PM, even as hopefuls for the Conservative leadership work on their French

Parliament Hill and the Library of Canada in the fall in Ottawa, Ont. on Oct, 18, 2012. Lars Hagberg/CP

Not much has changed in 150 years. The very first political controversy in the history of Canada—opening day of Parliament on Nov. 6, 1867, to be exact—should sound rather familiar to modern ears.

Before the House of Commons heard its first Speech from the Throne, and even before James Cockburn was named first Speaker of the House, Canada’s original political outrage reared its head. On day one, Quebec MP Joseph Dufresne rose “expressing his dissatisfaction at the nomination of Mr. Cockburn, on the ground that the gentleman could not speak the French language,” according to the official record of debates. Dufresne claimed an ability to converse in English and French was a “principle that lay at the foundation” of this new country.

Dufresne wasn’t successful in derailing Cockburn’s candidacy; his supporters noted he could understand French well enough to make rulings. But the notion that our political leaders must above all else be able to hold a conversation in both languages has since taken firm hold. It’s how we do things in Canada. But does it make any sense?

The putative candidacy of Kevin O’Leary in the Conservative leadership race has revived eternal Canadian handwringing over our leaders’ language skills. Montreal-born O’Leary admits he can’t speak French and has been widely mocked for putting off his decision to join the race until after a French-language debate in Quebec City next week, presumably to avoid embarrassing himself. After first claiming he didn’t need to speak French, O’Leary now says he’s “going to try” to learn the language.

COUNTERPOINT: Why should a PM speak French? Political reality.

Regardless of the specifics of O’Leary’s candidacy, it’s time to end this unwritten rule that no one can be considered a credible candidate for prime minister unless they speak both official languages. Potential leaders should be judged on the full range of their attributes; functional bilingualism is just one criteria of many, and not necessarily the crucial factor. Anything else risks shortchanging the country. 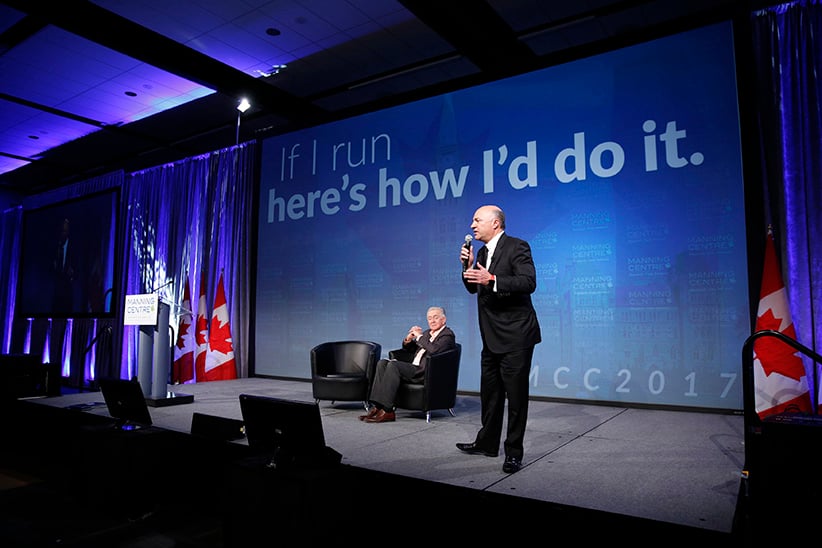 Of the 13 candidates hoping to replace Stephen Harper as Conservative party leader, perhaps four or five can be considered practically bilingual. The rest stumbled through the party’s first French-language debate in Moncton last month with a version of franglais familiar enough to anyone who’s ever struggled through high school French and then given up on the language altogether. (Save for trips to the wine store, of course.)

One of those Moncton strugglers, Ontario MP Michael Chong, joked that he speaks French as well as former prime minister Jean Chrétien speaks English. He’s got a point. Chretien’s mangling of both languages certainly didn’t prevent him for winning three consecutive majority governments.

MORE: Our profile of Michael Chong

With only 17 per cent of Canadians able to carry on a coherent conversation in English and French, mandatory bilingualism instantly disqualifies more than 80 per cent of the population from political leadership. Outside Quebec, the rate of bilingualism is less than 10 per cent. If the premise of representative government is that voters should be able to see themselves in their elected officials, strict adherence to a dual language requirement risks alienating the vast majority of the electorate, particularly those in English Canada. Who wants to vote for a party that would refuse to accept you as its leader?

There’s value, of course, in a leader being able to speak directly to the entire country, Quebec included, and all parties have good reasons to favour candidates with strong language skills. (Former Liberal leader Stéphane Dion’s inability to communicate with English Canada being an object lesson here.) But this should be considered one political calculation among many when picking a new leader. Knowledge of economics and global relations are also important. As are empathy, hard work and a winning smile.

Disqualifying good candidates solely on current language skills denies the country access to the skills of most Canadians, offers huge advantages to a tiny minority and forswears the possibility of personal improvement. Recall the political fury over the Harper government’s appointment of the eminently well-qualified but unilingual Michael Ferguson as federal auditor-general in 2011. Liberal MPs boycotted the vote in outrage; the federal commissioner of official languages called the process a “humiliation.” But Ferguson wasn’t applying for a job as Parliament Hill tourist guide. Today he’s proven to be exactly the sort of gimlet-eyed defender of Canadian taxpayers’ interests the office demands.

Halfway through his 10-year term, Ferguson is now earning grudging praise from some of his toughest critics: Quebec’s French-language media. Last month, La Presse asked “What has improved in Ottawa over the past five years? Answer: The French of Canada’s auditor general.” La Presse’s acknowledgement that Ferguson now speaks the language with “assurance” is a remarkable turnabout, and evidence that anyone with sufficient motivation can learn French on the job in Ottawa. If O’Leary decides to jump in the ring, he should be taken at his word that he’s planning to learn French. It’s no scandal if he isn’t bilingual at this very moment.

Choosing Canada’s next prime minister is a matter of voters ticking the boxes they consider important. Bilingualism may be a bigger box than most, but it isn’t the only one that matters.