Chinese investors would prefer to continue funnelling their dollars into regions with far fewer procedural hurdles, such as East Africa

By Andy Blatchford and Mike Blanchfield, The Canadian Press July 7, 2017 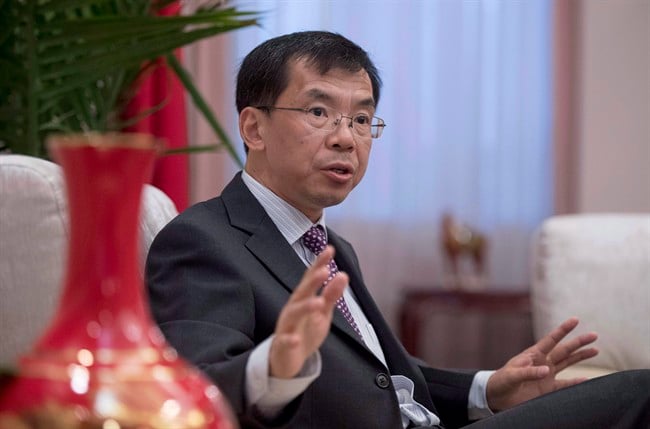 China’s Ambassador to Canada Lu Shaye participates in an interview at the Embassy of the People’s Republic of China in Canada, in Ottawa on Thursday, June 29, 2017. THE CANADIAN PRESS/Justin Tang

They would probably prefer to continue funnelling their investment dollars into regions with far fewer procedural hurdles, such as East Africa, he said.

“I think it is not easy to build large-scale infrastructure in Canada — I’m afraid that Chinese investors lack patience with this process,” Lu said through an interpreter in an interview at the Chinese embassy.

“They’re afraid that it would take too long to build large-scale infrastructure in Canada.”

To lure more foreign investment into Canada, Prime Minister Justin Trudeau and his Liberal government have pitched the country to international investors as a stable place with a skilled workforce.

The government is working on a new federal agency dedicated to attracting foreign investment — the so-called Invest in Canada Hub. It also plans to build a sales force to promote Canada abroad and to hire more trade commissioners in order to focus on pulling in investment from strategic markets.

Infrastructure is key to the Liberals’ long-term strategy to lift the economy and to create jobs. They have committed more than $180 billion for new projects, like bridges, railways and transit systems, over the next 11 years.

RELATED: What is Canada’s infrastructure bank for?

As part of the federal push to boost infrastructure investments, Ottawa is also establishing a $35-billion infrastructure bank to use public funds as a way to leverage billions more from private investors to pay for new, large-scale projects.

In exchange for their financial commitments, private investors would reap steady, predictable monetary benefits such as user fees or tolls.

But as the Liberals continue their quest for foreign infrastructure capital, they’re unlikely to get much investment love from China.

“Maybe in Canada you have complete procedures for conducting large-scale infrastructure projects,” the Chinese ambassador said. “In China, the procedures are also complete, but those procedures go very fast. So, to complete it, a project takes less time.”

Lu brought up an example to make his point: a recent proposal to build high-speed rail corridor between Toronto and Windsor, Ont.

The rail line would stretch nearly 400 kilometres and aims to be fully operational in 2031, a time frame that includes construction and regulatory processes such as environmental assessments. Its estimated cost is $20 billion.

In comparison, Lu said, a recently completed Kenyan railway between Nairobi and Mombasa — mostly funded by China — took fewer than three years to build, from the planning stage to finish. He added that the project also included the construction of nine new stations along the 480-kilometre line.

The $4-billion Kenyan rail project, 90 per cent of it financed by China, faced criticism and protest because of its environmental impact. It cuts through Kenya’s famed national wildlife parks and has affected the habitat of animals.

Last week, a $12-million, Chinese-funded bridge collapsed in another part of Kenya, creating embarrassment for its builder and for Kenyan President Uhuru Kenyatta, who is running in his country’s August elections on a platform of improving its crumbling infrastructure.

Conservative foreign affairs critic Peter Kent said the Kenyan bridge collapse is an example of the failure of China’s “infrastructure diplomacy” and something the government should be wary of.

“That’s not unusual given some of the Chinese government’s behaviours in the past — building infrastructure, being paid for it, and under delivering,” said Kent.

Lu, however, insisted there are few investment opportunities for China in Canada at the moment.

He said the weak price of oil has lowered Chinese interest in Canadian oilsands projects, leaving advanced technologies as perhaps the most-enticing opportunities.

Canada and China are engaged in exploratory talks towards a free-trade agreement and Lu expects any future deal would ease restrictions on bilateral investment.

China’s most-powerful business leaders have raised concerns about Canada’s regulations in the past.

Several members of the exclusive China Entrepreneur Club — often described as “the billionaires club” — have called on Trudeau to open up Canadian trade and investment even wider to the Asian superpower.

Before a meeting with Trudeau last fall, club president Ma Weihua told The Canadian Press the entrepreneurs planned to press Trudeau to create “more-favourable conditions” around the government’s approval procedures to ease “excessively rigid regulations” that hold back Chinese investors.

China, meanwhile, is hoping to attract infrastructure investments from Canada.

Lu said there are opportunities for Canada to invest in China’s massive “One Belt, One Road” trade infrastructure initiative, which aims to connect the country to many parts of Asia, Europe and Africa via ports, rail lines and roads.

“Even if Canada is not a country along the belt and road, it is also welcome to invest in this project.”