The facility will host a hockey tournament and open skating, but the government has been criticized for the cost and rules 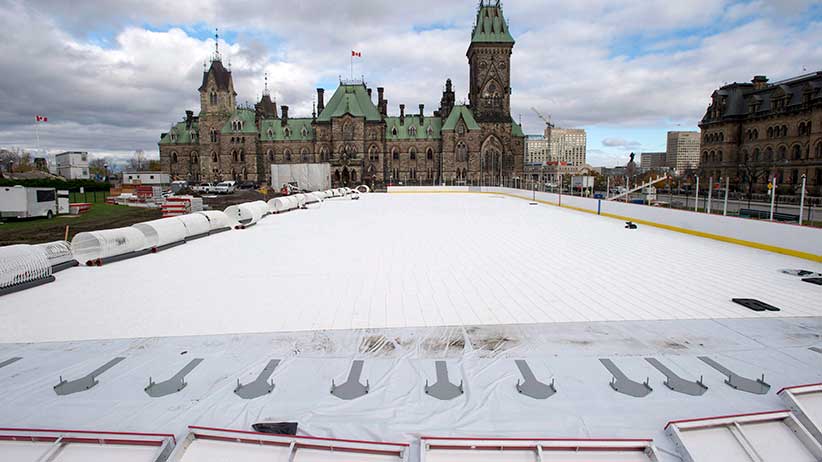 Boards are in place as construction continues at the skating rink on Parliament Hill, in Ottawa (Justin Tang/CP)

It should have been an empty-net goal from a public relations perspective—a hockey rink on Parliament Hill. But the the structure going up on the lawn in the shadow of the Peace Tower has landed the government in hot water, following reports of $5.6 million in costs and restrictions on what skaters will be allowed to do on the ice.

The public may well be justified in their outrage at a seven-figure price tag, but the figure isn’t quite what it seems. The Department of Canadian Heritage says the rink itself is set to cost $2.37 million, including design, construction, cleanup, and relocation expenses.

The Ottawa International Hockey Festival (OIHF), a non-profit, is running the facility, and putting on its 32-team tournament will require a budget of $1.3 million. Other programming will cost an additional million. For comparison’s sake, consider that the Canada Day celebrations in the capital in 2015, including the fireworks display, cost $4.17 million according to a Metro Ottawa report.

The Canada 150 rink will use a rented cooling system to ensure that it remains frozen for its entire run, from Dec. 7 through the end of February, an extension on the three weeks originally scheduled. The proximity of the Rideau Canal’s famously long natural skating surface has some mocking the Hill’s regulation rink. “Some have been saying, ‘the canal is right by,’ ” notes Andrew Campbell, senior executive director of the department’s Canada 150 Secretariat. “The canal rarely, if ever, freezes before January 1.” Campbell says Ottawa is lucky to have it, but when and how long it remains frozen is “always a challenge.”

Once the rink has been dismantled, the boards, glass, and benches will be donated to another town or city, and a hard surface will be installed to allow summer activities. (The cost of that addition is factored into the $2.37 million). Where exactly it will go has yet to be announced; Heritage Minister Mélanie Joly has previously said it would be in the Ottawa-Gatineau region. Campbell says OIHF is working with the Ottawa Senators Foundation, the mission of which includes the building of 20 such facilities, on the relocation.

Campbell says the Senators Foundation has contacted potential recipients, and that its process includes ensuring that it’s a community that’s in need, and where it will be maintained and welcomed. “There’s nothing worse than giving a gift that people don’t want,” he added.

While it’s on the Hill, the rules of the rink have been the subject of contention and coverage, but Campbell says they are standard for public skating across Canada. The prohibitions on food and drink on the ice, speed and figure skating, and “rough play,” are almost identical to those governing the outdoor facility at Ottawa City Hall.

Then there’s the ban on hockey sticks and pucks, also commonplace, which has perhaps proved most unpopular. It is “a little bit inaccurate to say there’s no hockey on the Hill, because there’s five full days,” says Campbell, referring to the tournament. Still, that’s a spectator sport, and does not change the fact that there will be no pickup games among regular folks. Other programming will include girls’ hockey clinics, ringette and and a broomball game involving girls from Kitigan Zibi on the opening day.

For free skating, a booking system will allow skaters to reserve their scheduled fun two days in advance. Pass holders are encouraged to arrive three-quarters of an hour early. “With the rink capacity for public skating being 200 people an hour, if a thousand people show up that’s a five-hour wait,” notes Campbell. “And I’m sure you would understand we’re a little sensitive to the stories that might have come out about a five-hour wait.” (This year’s Canada Day celebration saw just such line-ups to get onto the Hill).

The advance booking system will also enable skaters from out of town to make plans. “You can drive up from Toronto or Montreal, or if you’re flying in from Calgary for some other reason or it was always your dream to skate on Parliament Hill, you can fly in, you know you’ve got your reservation, and out you go on the Hill.”