Employment Minister Carla Qualtrough talks about Canada's pandemic programs, the mistakes that were made and why some Canadians will have to pay back CERB 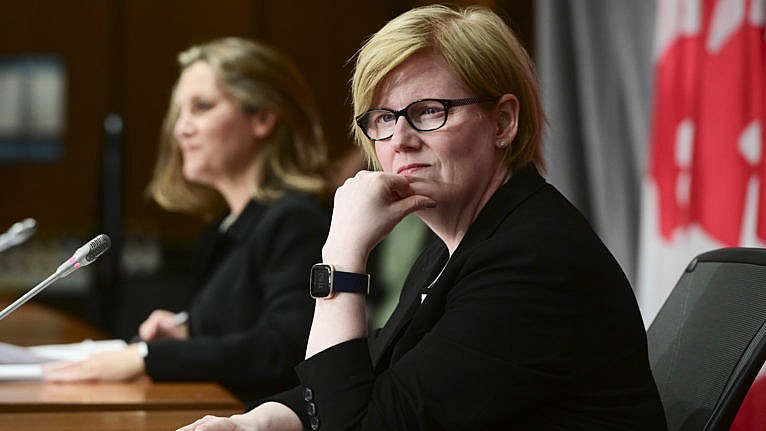 Carla Qualtrough was the cabinet minister who oversaw attempts to fix the Phoenix pay debacle that saw public servants paid wacky amounts, or not at all, for long periods of time. Qualtrough was also the procurement minister as a massive national shipbuilding program faced repeated, years-long delays. She was no stranger to portfolios with big problems when, back in March, she was employment minister as the bottom fell out of the economy and millions of Canadians were out of work. In April, Qualtrough spoke to Maclean’s about her government’s rapid reaction to the crisis. Back then, she hoped to convince the country that governments can pull off extraordinary achievements if they’re allowed to take a few risks.

As 2020 comes to an end, Associate Editor Nick Taylor-Vaisey asked Qualtrough what went wrong during the rollout of the Canada Emergency Response Benefit (CERB) that was sent to 8.9 million Canadians, what happens to CERB recipients who applied in good faith but are actually ineligible, and how the pandemic transformed federal-provincial relations.

Q: The CERB has wound down and you’re at the end of a long year implementing pandemic policy. What’s your honest assessment of that program?

A: I think what served us well was the fact that we were brave enough to boldly lay on the table our limitations. We assessed that EI wouldn’t work to deliver this to as many people as we wanted to. We knew our system limitations. We knew we’d have to do one amount for everybody, that we couldn’t have it scalable, nuanced, sophisticated, tested and piloted. We knew it had to be very simple and straightforward because we couldn’t fail.

There was no nuance to this. It was very blunt. We changed it to allow people to earn $1,000, but then people were faced with—well, I earned $1,100, now I can’t get the CERB. Quite frankly, that was just what the system could do.

It felt really unfortunate, and it did sadden me to hear the individual stories where people had earned just a little bit more. They were being honest. They knew they no longer qualified for the CERB. But that was where we hoped the wage subsidy would help with beefing up people’s work hours. We had designed these two programs to work together. But the wage subsidy didn’t roll out as easily, and to as many workers.

We didn’t sit down and design a fulsome package of measures that was going to get us through a year and a half of a pandemic. We were living this in real time.

Q: What was the actual process in place to tweak the CERB as you saw problems?

A: Eventually, we were always going to have to get people back to EI. While the system wasn’t ready on March 15, it had to be ready at some point.

While all this other stuff was going on in Employment and Social Development Canada around the CERB, and the student benefit, and the seniors payment, and the disabilities payment, people were constantly working on building capacity and changing parameters within the EI system so at some point, subsequently identified to be the end of September, we could get people back into EI.

In addition, we were getting questions on details. “I got a scholarship last year. Does that count towards my $5,000?” Despite our best efforts, of course there’s things that we missed, because it was such a breakneck speed to deliver it. We kept a running list of issues, and what we could fix through policy, what we’d need regulatory change to do, what we’d need legislative change to do, and how we could avoid multiple returns to the floor of the House of Commons.

Q: Thousands of CERB recipients who thought they were eligible have received letters saying they might have to pay back the CERB because they earned less than $5,000 in after-tax net income—as opposed to gross income earned before tax—and were actually ineligible. How well did the government actually communicate eligibility requirements?

A: The letters were sent out to 400,000 CERB recipients. That’s about four per cent of CERB recipients. What we’re saying for those people is we can’t validate your income. We can’t tell if you’re eligible or not. Help us. File your taxes. Show me proof of income. Let’s try and remedy this by the end of the year.

If you were an employee, Canadians knew pretty clearly the parameters of CERB and if they met them or not. The more sophisticated and complex your employment dynamic got, I think the harder it was to communicate clearly the eligibility.

In my mind, I’ll be super honest, I knew it was net income from the beginning. That intuitively made sense to me, because that’s how CRA always calculates self-employment income. The eligibility has not changed.

Clearly, we could have communicated it better because there’s a massive misunderstanding now that I feel really badly about, because I don’t want people to feel as though somehow we changed the program, or somehow they were misled. I feel very bad that there are people in this position now who through no fault of their own honestly believed they were entitled to this, and now may be in the position of paying it back.

Part of the deal was we’re going to loosen up eligibility integrity measures at the front, but be as vigilant as ever at the back. We always knew we’d have to go and verify everybody’s income. We always knew that we’d have to verify you met the other criteria so you’re not earning both the wage subsidy and the CERB at the same time. It isn’t the fun part of it, because it’s tough for people.

Q: Will CERB recipients who don’t meet the net income requirements, but applied and received the CERB in good faith and still face tough circumstances, still be asked to repay the benefit?

A: I think people are going to have to repay it. We’re going to work with them on when, how much per month. Right now, CRA is doing no collections of new debt. People don’t have to repay it now. The CRA is saying that until it’s reasonable to do so, they won’t be collecting anything. Their collection activity has been halted.

At some point, I don’t know when that would be, we’re going to start collecting. We have a commitment to be as compassionate as we can be. Maybe you’re paying $25 a month. There are circumstances where interest can be forgiven. There are programs in existence that will help minimize the difficulty that people will face. But right now, no, there is no commitment to basically forgiving debt that was incurred in good faith.

Q: In April, you told me that your government hoped to “sensitize the public to it being okay to course-correct in government, and try things that are a little bit more bold or risky.” Do you think it worked? Are Canadians comfortable with risk-taking governments?

A: I think the appetite for calculated errors resulting from calculated risks is a little better. I hope we don’t step back into the old tendency to avoid risk at all costs. I think, overall, we are more comfortable admitting things didn’t go as well as we’d hoped.

We knew the first commercial rent program would be a little more challenging because, of course, it’s provincial-territorial jurisdiction and we were leaning on landlords—which meant we were testing the landlord-tenant relationship a bit. It didn’t end up getting the uptake or the help to people we genuinely wanted to help. And now we have a new commercial rent program that’s better and goes right to the tenant.

Q: The difference between the first commercial rent relief program and the current program is night and day for many small businesses.

A: We really believed the best way to do that, given the realities of provincial-territorial jurisdiction, and who had responsibility for what, was working with CMHC and working with landlords. And then case by case, we heard of roadblocks. We had to find a way to more directly interact with people to get money into their bank accounts.

That was one of my big lessons learned. We joke that Canadians don’t walk around thinking about Section 91 and 92 of the constitution. They don’t walk into a bank knowing that’s Section 91 and then walk next door into a credit union and know that’s Section 92, which is provincial jurisdiction. They don’t think about who has responsibility. And yet that really impacted the way we could deliver, and how quickly we could deliver, during the pandemic.

Q: So do you think the public is willing to accept governments who take more risks?

A: History will tell, right? There’s going to be microanalysis of all of this, but it won’t have been for lack of trying, because we’ve worked hard. And the public service has worked hard.

Q: The pandemic seriously disrupted typical federal-provincial relations. How have those conversations changed, and will this new way of doing business outlive the pandemic?

A: There’s a lot more horizontality. Historically, the federal-provincial-territorial mechanisms had become very rigid. There was a group of employment ministers. There was a group of ministers responsible for people with disabilities. It was quite extraordinary to have somebody from another portfolio cross-pollinate. And now I really think that’s become the way of doing business out of necessity. I would hope that becomes a common practice because it’s way more effective.

When my COVID-19 Disability Advisory Group has concerns about visitor policies and people with disabilities not being able to bring their attendants and support personnel into the hospital, I don’t actually need to talk to disability ministers about that. I need to talk to provincial health ministers and public health agencies. So what did we do? I called the health minister and she got on a meeting with all of her provincial counterparts, and we talked about it. And my Disability Advisory Group presented to them. Literally, that would have taken years before.

I think the interpersonal relationships are stronger. We’ve taken the time to know each other. We can lean on each other. Did we win every battle? Absolutely not. Am I frustrated? Yeah. But man, it’s easier to get the answers even if you don’t like them.

It was very scripted before. It was almost like a rehearsed play. Our officials would meet and agree upon what we would talk about. They would hash out almost what we would say, but not quite. Everything would be baked. A lot of work went into getting us together to talk to each other once a year. And now we talk to each other all the time. Does that send a few shivers up the backs of bureaucrats? For sure, because they don’t know all of what we’ll say. But man, do we get a lot more done. It’s a real conversation. I think that’s the legacy of this.