Catherine McKenna: 'No more delays, no more denials. We need to act.' 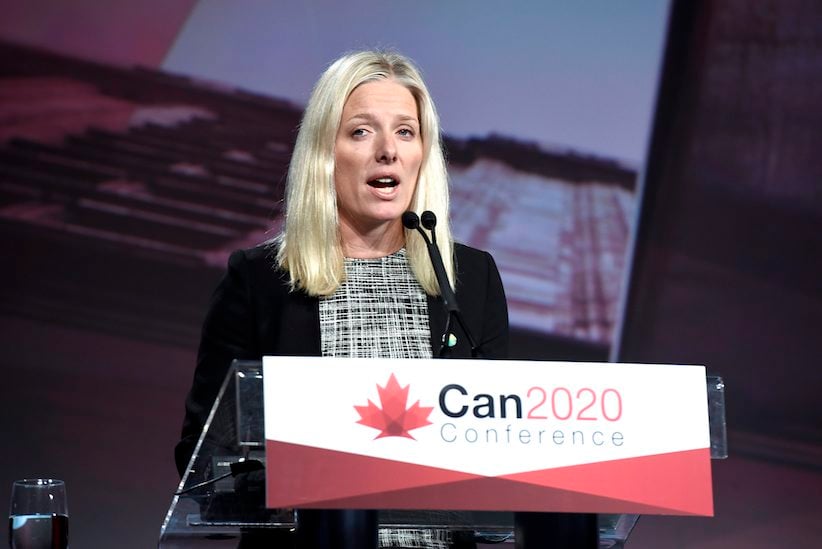 Minister of Environment and Climate Change Catherine McKenna speaks at the Canada 2020 conference, in Ottawa, on Friday, Nov. 20, 2015. THE CANADIAN PRESS/Justin Tang

OTTAWA — Past Liberal and Conservative governments have taken too little concrete action on climate change and it’s time for the whole country to step up, says the new federal environment minister.

“No more delays, no more denials. We need to act,” Catherine McKenna said in a speech to the Canada2020 policy conference Friday.

A major international climate conference begins next weekend in Paris, where more than 160 countries have made emissions pledges geared toward slowing and then reversing rising carbon levels in the atmosphere.

Canada has signed past international climate deals, including the 1997 Kyoto accord and the 2009 Copenhagen protocol, that included national targets for reducing the greenhouse gases that scientists say contribute to global warming. But the country has never achieved the emissions cuts it promised and is currently nowhere close to meeting the 2020 target it set just six years ago.

“It means ending the cycle in which federal governments of both stripes have set arbitrary targets without a corresponding plan, without adequate consultation and partnerships, without the commitment and the will required to make those targets achievable,” said the new minister, whose portfolio has been formally named “environment and climate change.”

The Canadian delegation goes to the UN-sponsored Paris talks bearing the previous Conservative government pledge of cutting emissions 30 per cent below 2005 levels by 2030, although the Harper government never made clear its plan for achieving that target.

McKenna told the receptive Canada2020 audience — a conference dominated by Liberal party activists — that the Conservative commitments “represent only a starting point, a floor for our post-2020 ambition, not a ceiling.”

She says it will take a concerted, co-operative effort from all levels of government, businesses and consumers.

Her speech Friday came shortly before Ontario Premier Kathleen Wynne and Quebec’s Philippe Couillard took to the stage at the same conference, where the premiers welcomed what they called the return of a federal partner to the climate fight.

Wynne drew laughs from the Liberal-friendly crowd when she remarked on the novelty of Monday’s first minister’s meeting with new Prime Minister Justin Trudeau — the first in almost seven years — to discuss climate and refugee issues. And she quipped she’s had as many conversations with Trudeau since the Oct. 19 election as she ever had with the previous office holder.

“But the one thing having a new federal partner doesn’t mean is that the provinces and territories can step back and let the feds do the heavy lifting,” the Ontario premier said.

She said the provinces and territories have now been working together for several years and have come up with common principles for a national energy strategy and climate plan.

Alberta’s NDP government is poised to announce its new climate plan Sunday on the eve of the first minister’s meeting.

“The upside of never having had the (Conservative) prime minister at the table with us since 2009 is that the kids’ table has learned to work really well together,” said Wynne. “So we’re not going to take any nonsense.”

Couillard downplayed expectations for Monday’s climate conflab, saying the first ministers won’t have time to solve every issue, including how billions in federal green infrastructure funding and the $2 billion green climate fund will be divvied up among the competing jurisdictions. He also cautioned the federal Liberals about trying to revisit all the work the provinces have already done on the climate file.

“There’s always a tendency for governments that come into office to tend to think that nothing meaningful happened before the day they were elected,” said the Quebec Liberal premier.

It’s a message that goes beyond government.

Tim McMillan, the president of the Canadian Association of Petroleum Producers, attended McKenna’s speech and said later in an interview that the oil and gas industry can and is doing its part, but the climate issue requires collective action.

“If we’re talking about the climate debate, it has been easy in the past to have simplistic views. If we want meaningful change, there is no easy solution, no silver bullet, no single industry in a single country that can carry the load on this.”

Or as the federal environment minister put it: “None of this is going to be easy. That’s all the more reason to get to work.”