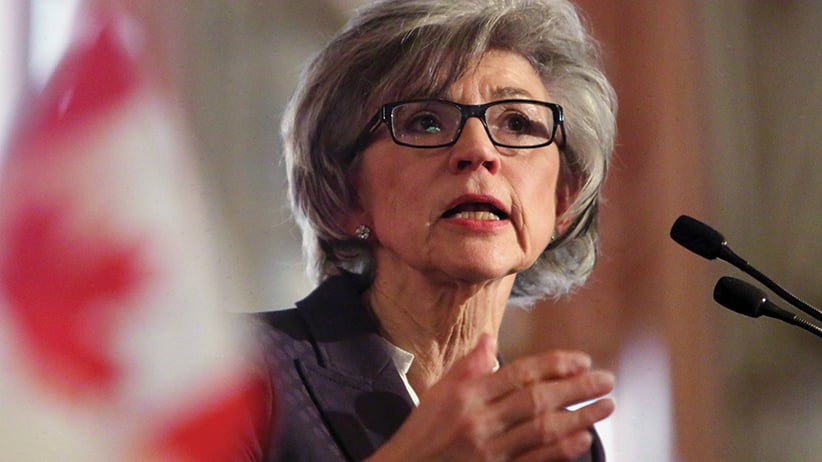 OTTAWA – Canada’s top judge is urging Prime Minister Justin Trudeau to hurry up and fill the soon-to-be empty seat at the Supreme Court.

Chief Justice Beverley McLachlin said it is taking too long to name a replacement for Justice Thomas Cromwell, who retires next month.

As a way to make the process more transparent, the Liberal government announced last week that a new non-partisan advisory board will choose potential new judges to sit on the high court.

“I understand that process is important, but it is also essential that the current vacancy be filled so that the Supreme Court of Canada can discharge its responsibilities in the session to come in the best possible fashion,” McLachlin said Thursday in an address to the annual legal conference of the Canadian Bar Association.

“The Court needs – and the Canadian people are entitled to – a full complement of nine judges to decide the complex and important questions before it,” she said.

“I would be less than frank if I did not say that I am concerned about the length of time it has taken to fill this vacancy,” said McLachlin, but she added that she remains hopeful she will have a new colleague on the bench early this fall.

The House of Commons justice committee is meeting Thursday afternoon to grill Justice Minister Jody Wilson-Raybould about the seven-member advisory board, which is chaired by former prime minister Kim Campbell.

The convention would have been for Cromwell, who is from Nova Scotia, to be replaced by another judge from Atlantic Canada. But the Liberal government has indicated the advisory board would be considering candidates from across the country.

Janet Fuhrer, president of the Canadian Bar Association, wrote a letter to Trudeau and Attorney General Jody Wilson-Raybould Wednesday urging them to reconsider respecting the custom of regional representation.

McLachlin said she is also concerned about the other 44 judicial positions nationwide the federal government has yet to fill.

“There is something deeply wrong with a hiring scheme that repeatedly proves itself incapable of foreseeing, preparing for and filling vacancies as they arise,” she said.

“The perpetual crisis of judicial vacancies in Canada is an avoidable problem that needs to be tackled and solved. Without a full complement of judges, and an efficient system for anticipating and filling vacancies, delay will continue to be a feature of our justice system,” she said.

McLachlin said the vacancies can restrict access to justice, which she said should be a top priority to ensure the public does not lose confidence in the system.

She also had a list of other challenges that the governments could fix.

“Rules and procedures are still more complicated than they should be, causing unnecessary delays. Financial barriers continue to thwart access to justice. The low level of funding for legal aid leads litigants to appear in courtrooms without the support of counsel, placing unfair burdens on courts, the litigants, the bar and, ultimately, the public purse,” she said.

“And finally, some may hold attitudes of mistrust or fear toward the justice system, refusing to engage with it or acknowledge its legitimacy,” she said.

McLachlin, who has been chief justice since 2000, also highlighted the problem of courts being “underequipped and understaffed” – exacerbating the problem of access to justice.

“It will be crucial to look at ways to ensure the proper funding and staffing of courts, while preserving judicial independence and ensuring public accountability for moneys spent,” she said.

McLachlin also called on the federal government to restore funding to the Canadian Judicial Council she chairs, which she said has been struggling since losing a major part of its funding in 2014.