Paul Wells on the oddity that is Guangzhou's Central Business District

After we post my Harper-in-China wrap, which will appear in issues of the magazine that begin hitting newsstands on Thursday, I’ll get off the Harper/Energy/China kick that has preoccupied me for most of the year to date. But I haven’t told you too much about what China was like, or at least the sliver of it that we saw on the press tour, just as a place to visit. And I’d be remiss if I didn’t point out that in many ways it’s an unpleasant place.

It’s particularly unpleasant for Tibetan monks, six of whom set fire to themselves during (but for reasons not particularly related to) the Prime Minister’s visit, as Andrew Cohen points out in a very good column. For Western VIPs and their consensus-media tormentors, it is the lap of luxury. There’s no comparison between the way we were treated and the fate that awaits dissidents. But even the lap of luxury was unnerving, and dispiriting, in subtle ways. Nowhere more so than in the Zhujiang New Town of Guangzhou, which we visited last Friday.

This is Guangzhou’s Central Business District, tossed up quickly at unimaginable expense to serve as a very Western-themed showcase for China’s amazing wealth. There’s one like it in most big Chinese cities, I’m told, and they’ve all sprung up in the last half-decade. We stayed at a hotel there and ate lamb chops and caprese salad as if it were the Westin Ottawa. Well, the Westin Ottawa on LSD.

The only thing missing was people. Let’s begin with the Guangzhou Friendship Store, a high-end retail outlet in the new town district. Souvenir photos: 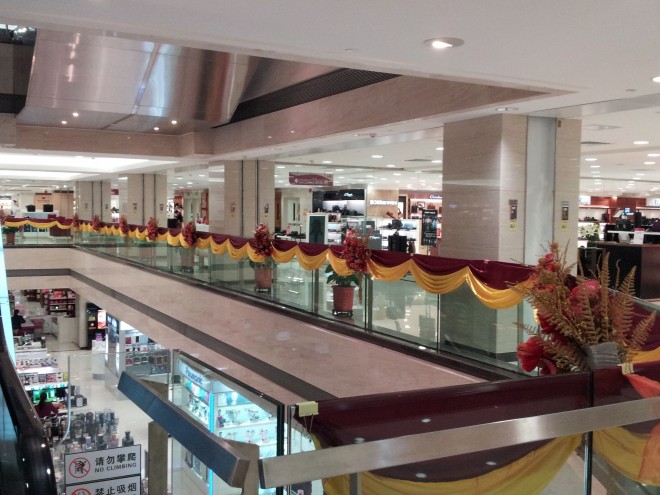 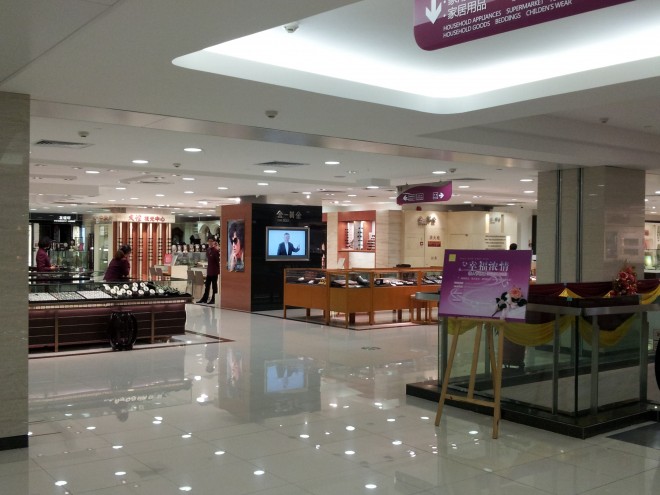 See what’s missing, at 2 p.m. on a Friday afternoon in mid-winter? That’s right. Anyone to buy anything. There are sales clerks, though — fleets of them, eager young men and women in snappy uniforms who converged on me in clusters of four and five whenever I hovered within three feet of a display case. Eager to help. Desperate to help, as if a chance to interact with a visitor was their only shot at escaping the monotony of the day.

It was the same at our hotel, which looks nice in the website photos but which is poorly designed: to get to your room you need to take an elevator to the 22nd-floor lobby, walk to another bank of elevators, and then descend to whatever floor your room is on. It would take two hotel clerks to explain this to a visitor. The Guangzhou Hyatt laid on at least a dozen, each pointing the next six feet of your trail, each delighted for a visitor to break up the afternoon with a little distracting make-work.

A colleague who’s based in China says it’s like this in the part of every large city that welcomes foreigners: an astonishing opulence for which there is no local market and not much of a tourist market. A highly local profligacy with resources, material and human, that is out of all proportion to the way ordinary Chinese live their lives only a few kilometres away.

The last stop on our tour is the Guangzhou Opera House, designed by the Iranian starchitect Zaha Hadid, built for $200 million, opened 11 months ago and subject to fawning international coverage. I’m lucky I saw it when I did, because it may not last much longer. It’s falling apart, which is actually not that big a problem because it is essentially abandoned in any case. The hall’s website lists no events for the rest of February, nine for all of March, five for April, five for May and one for June. That’s an average of four nights’ use a month. Edmonton’s Francis Winspear Centre is busy about half the time; Ottawa’s National Arts Centre is almost never dark.

It’s a fake opera house across the park from a fake shopping mall next to a fake hotel in a fake neighbourhood designed to snow gullible foreigners, not 100 km from villages whose residents live in grinding poverty. A rich command economy is still a command economy, and it commands its subjects to live in ways that steal hope. There was much more to like about other parts of other cities we visited — Chongqing is wild, bustling, dirty and vital — but after less than a day I was eager to put Guangzhou behind my back. And grateful for the right to do so.