Chrétien: 'What has happened to Canada?' 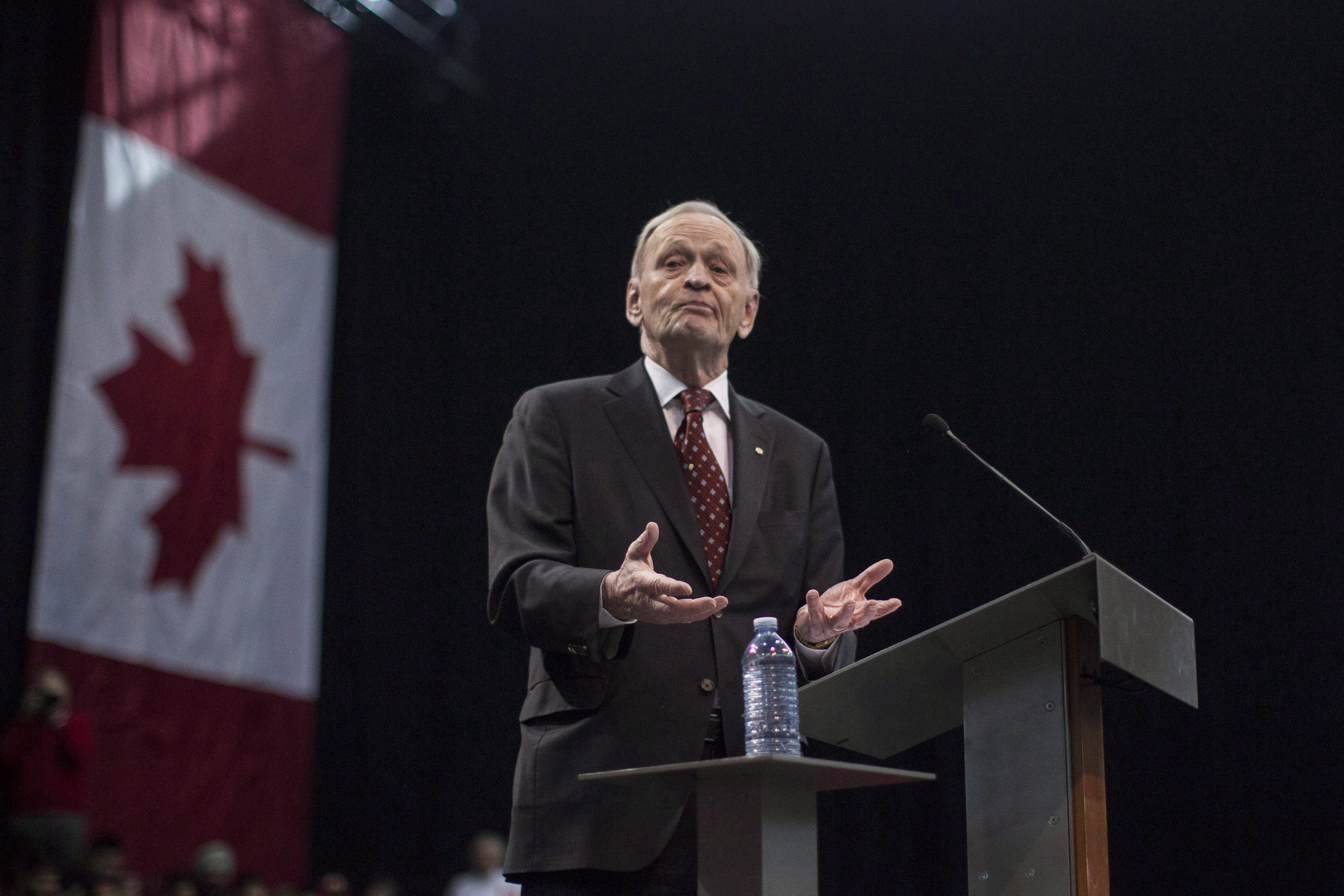 Former PM Jean Chrétien in February 2015 at an event celebrating the 50th anniversary of the Canadian flag. (Chris Young/CP)

In a blistering, open letter to three newspapers, Chretien accused the Conservative leader of shredding Canada’s international reputation as a peace-seeking, progressive and compassionate country.

And he charged that Harper’s “cold-hearted reaction” to the Syrian and Iraqi refugee crisis has “shamed Canada in the eyes of Canadians and of the international community.”

The letter, published in the Globe and Mail, Le Devoir and La Presse, was just the first of a triple-pronged attack by Chrétien. Later Saturday he made similar comments at a campaign rallly for an Ottawa Liberal candidate. He is scheduled to appear at a rally and media availability Sunday with Liberal Leader Justin Trudeau in Hamilton.

In an apparent bid to blunt the force of Chrétien’s indictment, the Conservatives held a hastily arranged news conference Saturday to announce $100 million in additional humanitarian aid for Syrian refugees. Harper is also expected to announce within days measures to accelerate the process of resettling Syrian refugees in Canada.

Harper promised earlier this year to accept 10,000 refugees over three years and, since calling the election last month, has promised to bring in another 10,000 over the next four years. So far, fewer than 2,500 Syrian refugees have been brought to Canada.

Harper, Trudeau and NDP Leader Tom Mulcair all took a break from the hustings Saturday. But Chrétien filled the void with his withering assessment of Harper’s more militaristic approach to foreign policy.

“I am sad to see that in fewer than 10 years, the Harper government has tarnished almost 60 years of Canada’s reputation as a builder of peace and progress.”

Chretien said previous Liberal and Progressive Conservative prime ministers sought to engage and influence other world leaders, including those with whom they disagreed. Unlike Harper, “they did not try to embarrass or give other countries lessons in good behaviour.”

Under his watch, Chrétien noted that he refused to join the U.S. war in Iraq and he boasted that Canada was “noticed and respected” for that decision. Under Harper, he said Canada has joined aerial bombing campaigns in Libya, Iraq and Syria, even celebrating the purported victory in Libya with a flyover above Parliament Hill.

“This is a ritual normally characteristic of conquering and warlike countries,” Chretien said.

At the news conference to announce increased humanitarian aid for Syrian refugees, International Development Minister Christian Paradis countered by questioning the propriety of Chrétien’s recent private meeting with Russian President Vladimir Putin. He said it’s “kind of questionable” for Chrétien to meet with the man who orchestrated the invasion of Ukraine and who is backing the brutal regime of Bashar Al-Assad in Syria’s bloody civil war.

And Paradis defended Harper, who has told Putin, to his face, that Russia must exit Ukraine.

“On this side, I think the prime minister is on the good side of the story … He’s coherent.”

On Syrian refugees, Paradis said Harper has shown himself to be “a man of principle.”

While the leaders were resting Saturday, the parties dispatched various emissaries to snipe at one another throughout the day on a variety of issues.

The Liberals sent out Toronto MP Adam Vaughan and Hull-Aylmer candidate Greg Fergus to demand that the Conservative party repay $610,000 in donations they estimated were collected at fundraising events featuring disgraced Sen. Mike Duffy. Duffy is on trial for allegedly fraudulently claiming Senate expenses he wasn’t entitled to, including for trips to Conservative fundraising events.

Fergus referred to the donations as “dirty Duffy dollars.” The Conservative campaign shot back by dredging up the Chretien-era sponsorship scandal, in which advertising agencies in Quebec were paid millions for little or no work, with some of the money kicked back to Liberal operatives.

“This is pretty rich coming from the Liberal party since they took $40 million from Canadian taxpayers and handed it out — some of it in brown envelopes — to Liberal party operatives in the sponsorship scandal,” said Conservative spokesman Stephen Lecce. “The Liberal party did not repay one dollar of that money.”

The NDP, meanwhile, staged a telephone news conference with two of its MPs, Charlie Angus and Alexandre Boulerice, who slammed Trudeau for smearing small business owners as tax cheats.

Trudeau last week said a “arge percentage” of small businesses have been created by wealthy individuals as tax shelters. While he supports reducing the small business tax rate to nine per cent from 11 per cent, he said the system needs “tweaking” to ensure the tax benefit is going to companies that actually create jobs.

Angus demanded that Trudeau explain whether he claimed the preferential small business tax rate for a numbered company, through which the Liberal leader funnelled some $1.3 million in income from public speaking between 2006 and 2011.

Angus wound up admitting that there is a problem with abuse of the small business tax rate but he called it a relatively minor issue that could be fixed with a “tweak” — precisely the same language Trudeau has used.