Paul Wells: Why is logic that is so obvious to the Chrétien wing of the party so unpersuasive to Trudeau's government? A few theories. 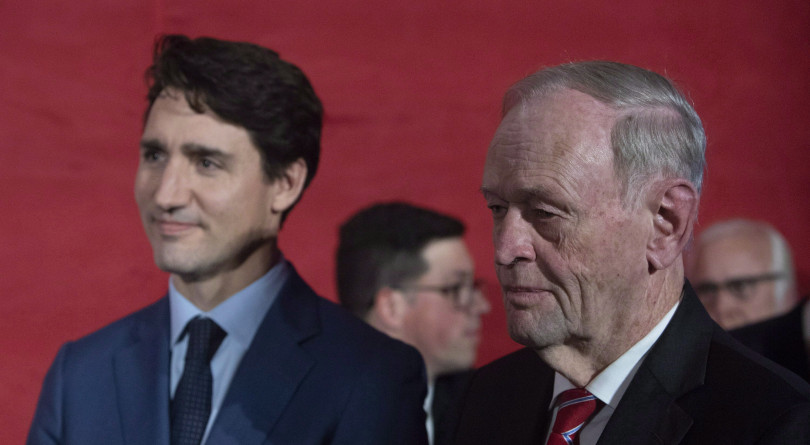 Trudeau stands with Chretien at a reception celebrating 25 years since Chretien was elected in his first term as prime minister, Oct. 25, 2018 (CP/Fred Chartrand)

It was helpful last week of Jean Chrétien’s former right hand Eddie Goldenberg to make, in detail, a case several of his contemporaries have been making piecemeal for more than a year: that taking Canada’s extradition treaty with the United States seriously won’t get Canadian prisoners in Beijing released, so we should just do what Beijing wants.

“The first priority of any government must be the liberty of its citizens,” Goldenberg writes, “and all political parties agree that the Canadian government must spare no effort to obtain the release of Michael Spavor and Michael Kovrig.” (Well, sort of? No political party has advocated the “prisoner exchange” Goldenberg advocates, and indeed he acknowledges as much in the next breath: “It has become clear that the government and the opposition parties have shied away from recognizing reality and acting accordingly.”)

There’s no point in parsing Goldenberg’s argument too closely. He views Trump’s thuggish tweet linking Meng Wanzhou’s arrest to U.S. trade disputes with China as essentially disqualifying for the legitimacy of Meng’s continued  detention. Trump’s own administration routinely ignores the president’s outbursts, but apparently Canada mustn’t. Canada’s policy should be guided by a combination of perfect insouciance regarding the Beijing regimes actions—it “should have nothing to do with how we feel about China or the Communist Party of China or the persecution and mass detainment of Uyghurs in Xinjiang”—combined with deep empathy for Xi Xinping’s feelings—”It is essential to understand where the Chinese are coming from. Beijing believes Ms. Meng is a hostage that Canada is holding for Mr. Trump.”

And so we spring the Huawei executive to get the Canadians. This is all very difficult, Goldenberg says, a distasteful arbitration between bad and worse, and of course the two Michaels are innocent. It is the weight of a year’s sad experience that forces this choice. But it’s a funny thing: John Manley and other veterans of the 1990s were making substantially the same arguments a year ago, when the Kovrig and Spavor detentions were only weeks old. The pressure on Trudeau-land from Chrétien-land has been constant and frequently remarked. For months it took the form of a succession of outbursts from John McCallum, Justin Trudeau’s former ambassador to Beijing.

It must have been embarrassing for this distinguished group when, four days after Goldenberg’s argument ran in the Globe, a handful of listless protesters showed up for Meng’s court appearance in Vancouver, waving identically hand-lettered signs essentially repeating the same argument. One later said he’d been called, and thought he would be paid, to be an extra in a TV commercial. He was expecting (and never even received) $100, which must be at the low end of a sliding scale on such matters.

At the high end, there remain, of course, vast fortunes to be had from China. I note that Sagard China, the Middle Kingdom branch of the Power Corporation investment empire, lately boasts $500 million in assets under management. Eddie Goldenberg doesn’t work at Power Corp, John Manley doesn’t, John McCallum doesn’t, but neither are there sharp ideological divisions among the Chrétien-era eminences and a company with close ties to generations of former Canadian prime ministers.

I find myself wondering why logic that is so obvious to the Chrétien wing of the party is so unpersuasive to Justin Trudeau’s government. (I’m often nostalgic for Chrétien’s government these days, but on this case I disagree wholly with the Chrétien claque and hope Trudeau’s stubbornness endures.) Perhaps one day we’ll know how much of Trudeau’s resistance to Chrétienite blandishments is down to the personal influence of Chrystia Freeland, who is sometimes seen by old hands as touchingly naive, or culpably hawkish, on a bunch of files on which Canada used to go along to get along. It’s striking that Freeland, who is a former foreign minister except when she likes the questions, rebutted Goldenberg on behalf of the government, with a familiar refrain: in Canada we take extradition treaties seriously.

I have two other theories to explain the difference between 1990-2003 Liberalism and 2020 Liberalism when it comes to China. The first is that Power Corporation can’t buy the influence it used to have. I’ve harped before on the tight caps to corporate and individual political donations (best explained by this old Ken Whyte column) that were implemented by Chrétien near the end of his time in office and tightened a few years later by Stephen Harper.

For better and for worse, and it’s easy to identify effects of both kinds, those caps ensure that the member corporations of the Business Council of Canada can’t give money directly to political parties. I think the elimination of corporate and union donations [UPDATE: Yikes, I’m rusty on this stuff. An earlier version of this story suggested corporate donations are permitted; in fact, since Harper’s 2006 law, they aren’t at all]  make it easier to ignore the demands of a few very large corporations, or harder to ignore the next thousand or so individuals who might be coaxed into donating $25 or $50. It’s a profound change in our political culture, too little noticed.

So who made it easy for future prime ministers to ignore big companies with high stakes in China? In part, Jean Chrétien did. Life’s full of these surprises.

My second theory is only a hunch. We’re getting to the point in Trudeau’s political career where it takes a long memory to recall some key events, such as the 2016 murders of Canadian hostages John Ridsdel and Robert Hall at the hands of the Philippines-based Abu Sayyef Group. At the time, Trudeau’s entourage put great emphasis on the Prime Minister’s decision never to negotiate for the release of hostages. It had been a subject of conversation around the dinner table at 24 Sussex Drive when Pierre Trudeau was prime minister. “My birth came just a year after the October Crisis” and its kidnapping of two public officials, the younger Trudeau wrote in his 2014 memoir. “The idea of someone seizing [his mother] Margaret and me was hardly unthinkable.”

When Ridsdel and Hall were captives in danger of their lives, Trudeau was categorical. “Canada does not — and will not — pay ransom to terrorists, directly or indirectly,” he said.

Of course everyone prays for, and should reasonably expect, a far less terrible outcome for Kovrig and Spavor. All the evidence suggests the Canadian government is deploying substantial resources to get these two innocent men home safely. Normally I wouldn’t draw such a sombre parallel as the one between these two and the two who were murdered in 2016. I note, however, that Goldenberg’s op-ed quite accurately calls Kovrig and Spavor “hostages.” It would be surprising if Justin Trudeau had not spent many hours thinking of them that way, and applying one of the first decisions he made as prime minister: no ransom, direct or indirect.