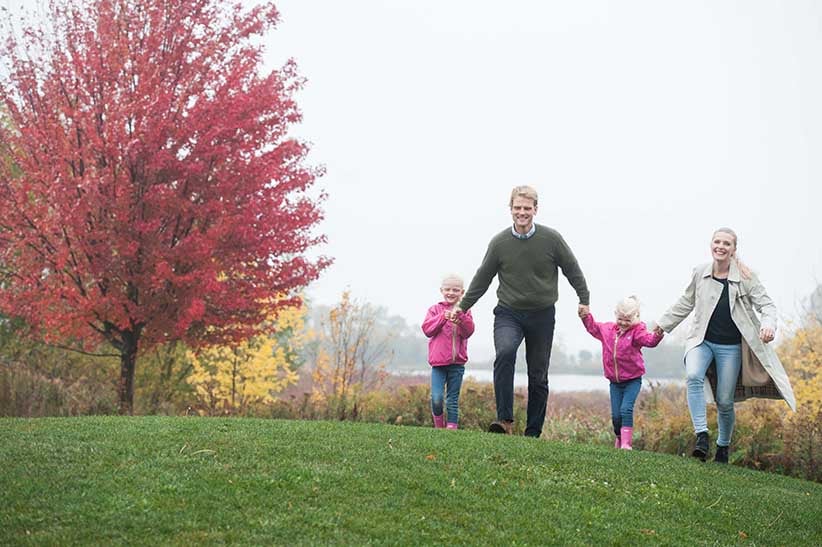 Canadian PC party member and former MP Chris Alexander with his wife Hedvig, and two children Selma and Elisabeth, outside of their home in Ajax, Ontario. (Photograph by Cole Garside)

Chris Alexander was seen as a Conservative rising star when he won a suburban Toronto riding in the 2011 election. Before jumping into politics, he had cut a dashing figure as an improbably youthful Canadian ambassador to Afghanistan. By the time he lost his seat last fall, though, Alexander had turned into a polarizing figure on the federal scene. This week, the former immigration minister, now 48, launches a comeback bid by running to become federal Conservative leader.

Q: Some Canadians will know a bit about you as a former diplomat who made the jump into politics. But what were your early years like?

A: I grew up in in Toronto. It was the ’70s and ’80s when I went through public school here and then a high school called the University of Toronto Schools. My classmates there were people like Ian Brodie, who became Stephen Harper’s chief of staff, and John Duffy, who’s been very prominent in Liberal circles. I got the political bug from them. One of the things we did most passionately was to organize a Model United Nations assembly. But the main influence was Toronto, realizing that our openness to the world, not just in terms of immigration, but economically, and in terms of ideas, the waves of immigrants and refugees that had come to this city.

Q: Did that directly influence your decision to join the foreign service?

A: I’ll be totally honest with you. I went into the foreign service because I was interested in politics. But, in 1991, when I joined, I didn’t see much of an opportunity to be involved in federal politics as a Conservative. We were at the tail end of the Brian Mulroney era. I wanted to do something non-partisan as a way of preparing for a role in our politics later.

Q: You got started at the foreign affairs department at a fascinating time, though.

A: One of the first things I was asked to do was watch CNN all night to see what was happening with the attempted coup against Gorbachev, and report that to the desk in the morning. I got swept up in Russian affairs for about 10 years before going to Afghanistan. 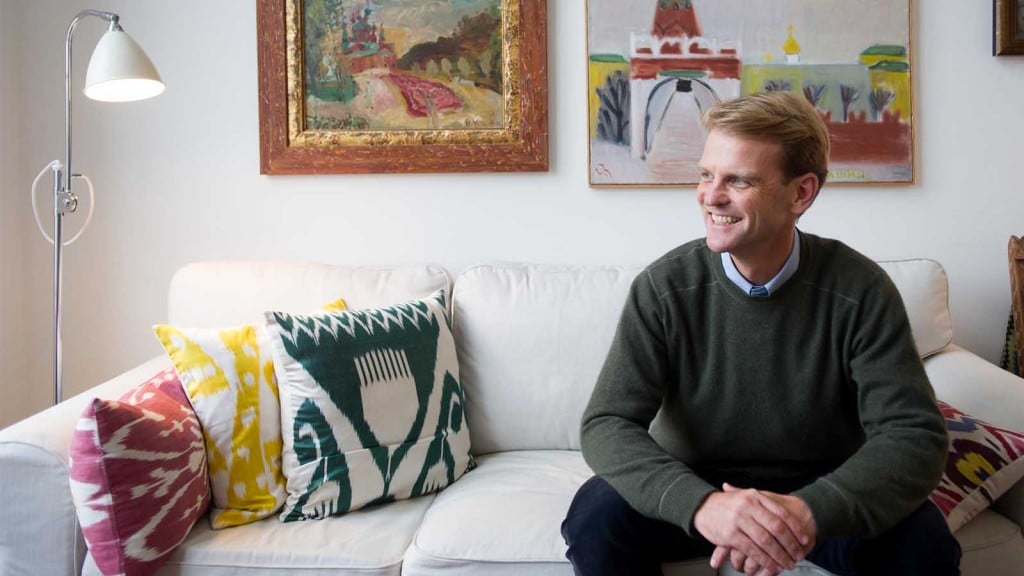 Chris Alexander at his home in Ajax, Ontario. (Photograph by Cole Garside)

Q: What was it like in 2009, after nearly two decades in diplomacy, plunging into politics?

A: I was coming back to Canada, as well as coming into Parliament [in 2011]. So balancing a young family, my constituency and then new responsibilities was certainly a challenge. I always felt in my field that we were accomplishing things. But it’s clear to me in retrospect we were at the end, or in the declining arc, as a government. It was harder and harder to tell the bigger story about immigration. And we got jammed up on some small issues during the election that I really regret coming to the forefront.

Q: You must mean, among other things, the idea of launching a tip line for “barbaric cultural practices” like forced marriage. You helped announce that proposal. What went wrong there: the basic idea or the way you sold it?

A: It was done by the campaign on short notice and, apparently, not with the full support even of the campaign and the prime minister. But it was clear to me, and it’s even clearer in retrospect, that in urban Canada we were already in danger of being perceived as somehow an unwelcoming party. That was, in my view, undeserved. But, in political terms, it was a disaster.

Q: The tip line idea was linked closely with your government’s stands against allowing the face veils at citizenship ceremonies and in favour of stripping the Canadian citizenship of dual citizens convicted of terrorism offences. A lot of immigrants were alarmed. Do you still stand behind those policies?

A: I think it is right for Canadians to be asked to show their faces when they’re taking the oath. On revocation of citizenship, we do not let people who have criminal records, including convictions for terrorism, become either permanent residents or citizens. I think there is a limit beyond which someone has really cashed in their chips in terms of their allegiance to Canada.

Q: Political candidates put so much into campaigning—dragging their families and friends along with them—that losing can be intense. What was it like for you on election night last Oct. 19?

A: It was personally devastating. It was very hard. 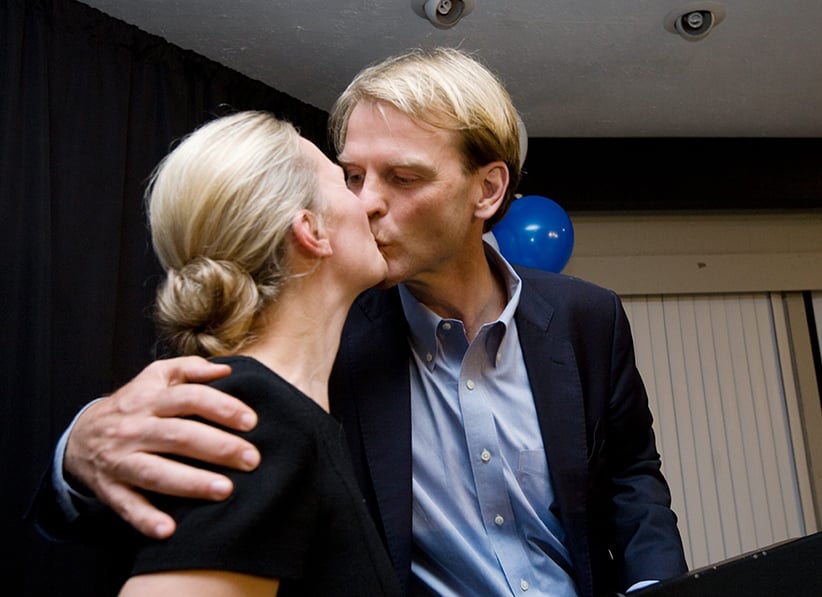 Chris Alexander gives his wife Hedvig a kiss after an election loss on Oct. 19, 2015. (Peter Redman/CP)

Q: But now you’re asking to lead your party. Why should Conservatives turn to someone who couldn’t hold his own riding, and was directly associated with a campaign move widely seen as a blunder?

A: I totally acknowledge that those questions will be asked. At the same time, I represented the sort of place we won in 2011 and that we need to win again. I wish it were otherwise, but it’s also not unprecedented to have someone who isn’t in Parliament becoming leader. Brian Mulroney had never sat in the Commons before becoming prime minister. At least I’ve had four years of experience as an MP and more than two years at the cabinet table. I think that will count for something.

Q: Given your international experience, how do you see the rise of Donald Trump, the Brexit vote, and the rise of right-wing populists in Europe? How can Canadian Conservatives take account of the anxieties driving all that foment, while still resisting the obnoxious elements in play?

A: There are people who just haven’t done as well in a globalized economy. The plant goes down. The industry is weaker. The price of the commodity has lagged. Any of those things can push people into unemployment or lower income categories, and that hurts. At the same time, Canada has had relatively good performance over this past decade compared to the U.S., compared to Europe. I think we need to celebrate the trend lines that have kept us on a different path and try to strengthen them.

Q: Why do you think Canada is in a different position than the U.S.?

A: I really see the U.S. staggering under the burden of three blows. One is 9/11 and the threat of terrorism, which is still huge in Syria, Iraq, and elsewhere. The second is the failed 2003 war in Iraq, which cost so much and ruined America’s credibility in the eyes of so many. Obama has repaired it to some extent, but those scars are deep. And then, thirdly, banks failed, the whole real estate market had the carpet pulled out from under it. We haven’t experienced any of those shocks on the same scale as the U.S., and some of them we avoided altogether.

Q: I take it you don’t see the Trudeau government safeguarding Canada’s position?

A: Justin and his team have had their hands in the pockets of Canadians. The marginal tax rate for high income earners is going up. Small businesses are no longer enjoying some of the exemption from payroll tax. Now there will be carbon taxes.

Q: So, to be clear, you would run against the new higher tax rate for income above $200,000, and against a price on carbon?

A: I would campaign against tax increases, especially for an [oil and gas] industry that has already shed 70,000-plus jobs. I’m totally in favour of meeting our Paris commitments to reduce greenhouse gas emissions. But I don’t think we should do that by making ourselves uncompetitive.

Q: How would we meet those targets, then?

A: There are a lot of other options on the table. The provinces have their authority to put carbon taxes in place. Sector-by-sector regulation actually got us some results. It slowed the growth in emissions and, for a time, actually reduced them. Tax is not the only option on the table, it’s not a panacea, and you don’t see countries that are absolutely serious about their Paris commitments lining up to put these carbon taxes in place.

Q: More broadly, what sort of policy vision will you be offering Conservatives?

A: We need, as a country, to be much more present globally than we have been today. We need to go beyond what any previous government has done in terms of our diplomatic network, our support for companies to export, trade and invest beyond North America, and our contribution to the safety of the international system, through defence, development, international organizations, and so forth.

We need to give the private sector many more powerful incentives to do research and development, to bring ideas and new discoveries to market in Canada, and commercialize them here, and stay here through successive stages of growth. But they can only do it with better government policies that give them more powerful incentive.