One individual who objected in the Duffy affair 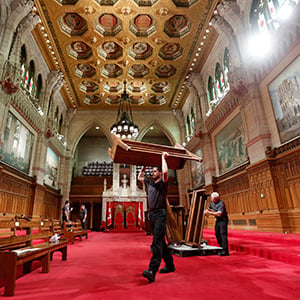 To the cast of characters of the Duffy affair, you can now add Christopher Montgomery.

May 8 was the day, according to the RCMP (you can view the filing here), that “major changes” were made to the Senate’s report on Mike Duffy.

At 1:54pm that day, Patrick Rogers, the director of parliamentary affairs in the Prime Minister’s Office, sent an email to Nigel Wright, the chief of staff, and Chris Woodcock, the director of issues management.

“The meeting is about to begin at 2pm,” Mr. Rogers wrote. “I just met with CSO [Carolyn Stewart Olsen]. I gave her our changes. She agreed with them 100%. I reinforced with her that the implementing of all of the changes to the report was the fulfillment of her commitment to Nigel and our building. She indicated she understood this.”

Forty minutes later, there was a problem.

“So I was too optimistic,” Ms. Stewart Olsen wrote to Mr. Rogers at 2:34pm on May 8. “Montgomery says we as Senators should not compromise ourselves.”

Mr. Rogers forwarded the email to Nigel Wright. “Here is the latest from the committee,” Mr. Rogers writes. “This is unbelievable.”

Mr. Montgomery was the director of parliamentary affairs in the office of Conservative Senator Marjory LeBreton, the Government leader in the Senate until this summer. He coordinated communications and worked with the PMO.

On September 11, 2013, Mr. Montgomery sat down down with two RCMP officers.

He told those officers that he “advised the PMO, specifically Patrick Rogers and Chris Woodcock, that they should not be involved in the Senate audit and reports regarding Senator Duffy.” According to Mr. Montgomery, Mr. Rogers and Mr. Woodcock “did not share his view.”

In his seven years in the Senate, he told the RCMP, he could not recall “other times when representatives from the PMO actually attended meetings and insisted on wording of a Senate report.” He said he ignored a request from Mr. Wright to speak with Mr. Duffy regularly because “he did not want to get involved in the audit process.”

On May 8, Mr. Montgomery said he was present at a meeting with Senator LeBreton, Senator Stewart Olsen, Patrick Rogers and Chris Woodcock. “They discussed the draft Senate report pertaining to Senator Duffy, and the PMO staff present were urging to have the report amended to be less critical of Senator Duffy. He (Montgomery) wanted it to remain unchanged, and there was a clear disagreement on the issue,” the RCMP reports.

“Senator LeBreton’s view was that it up to the committee to decide. He cannot remember how the meeting ended and the outcome of the discussion.”

Mr. Montgomery has apparently since left Parliament Hill and was, as of September, said to be moving out of the province to pursue a new job in the private sector.