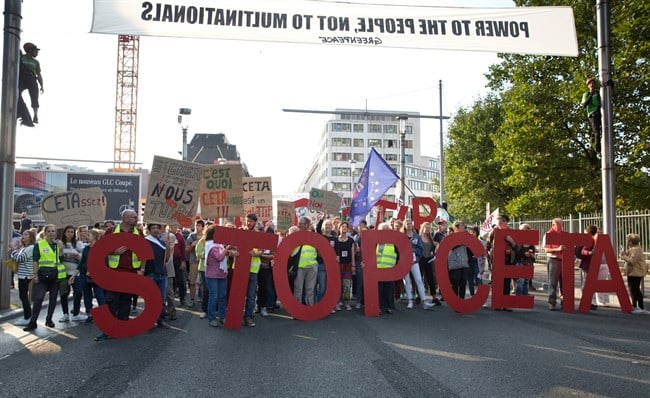 OTTAWA – International Trade Minister Chrystia Freeland says she’s still hopeful that a Canada-EU trade deal can still be salvaged, but “the ball is in Europe’s court.”

With the agreement — known as the Comprehensive Economic and Trade Agreement — seemingly on life support, Freeland emerged today in Ottawa to say she believes it can still be salvaged.

She also defended her decision last week to walk out on the talks in Brussels, calling it a “strong action” that had “the desired results.”

“Canada’s job is done,” Freeland told a hastily assembled news conference in the foyer of the House of Commons.

“For us this is an excellent agreement … Canada is ready to sign CETA, but the ball is in Europe’s court…. We wish them well and we hope that we can get there.”

The comments came shortly after the European Union also expressed optimism that a deal can still be reached.

The EU said that they haven’t given up yet on a summit in Brussels that’s scheduled for this Thursday, which is when Prime Minister Justin Trudeau was hoping to be overseas to sign the landmark free-trade agreement.

Trudeau spoke by telephone today with EU President Donald Tusk, who says “there’s yet time” to find a way to convince a Belgian region to back the deal.

Without all regions of Belgium supporting the agreement, the country cannot sign. The EU needs unanimity from all of its 28 member states.

“We think Thursday’s summit still possible,” Tusk said in a Twitter message. “We encourage all parties to find a solution.”

The sudden optimism on both sides came as something of a surprise, since the Belgian region of Wallonia has said it has too many concerns with the pact to overcome by Thursday.

The EU’s inability to sign would be a major embarrassment and undermine the belief that the world’s biggest trading bloc is a trustworthy partner as it seeks similar deals with nations like the United States and Japan.

Prospects for a signing ceremony looked as good as dead on Monday afternoon when Belgian Prime Minister Charles Michel admitted he could not get unanimity amid Belgium’s half dozen regions and legislatures.

“We have been asked to give a clear answer today” on whether Belgium could sign up as the last of 28 member states, Michel said after meeting with Wallonia leader Paul Magnette. “And the clear answer, at this stage, is no.”

Even though Michel is eager to sign the deal, Belgium’s byzantine constitutional setup means every single region in the country needs to back it, not only the national government. As a result, opposition from a region of 3.5 million could now nix a deal between over 500 million EU citizens and 35 million Canadians.

The EU’s executive commission called for patience in an attempt to save the free trade deal and had already dismissed a Monday night deadline as counterproductive.

Magnette insisted he would agree to nothing under the threat of an ultimatum but remained open to further talks.

“Each time they put forward such an ultimatum it makes a serene discussion and a democratic debate impossible,” he said. “I indicated that other parallel political contacts are still going on and that we could give counter proposals.”

The EU Commission, which has negotiated the deal on behalf of the 28 nations, insisted that this week’s summit was not the final deadline.

Andre Antoine, the head of the Wallonia legislature, said, “No, it will not be possible” to back the deal on Monday, arguing there were too many outstanding issues.

Even if Thursday’s EU-Canada summit has to be called off, it could always be rescheduled when Wallonia has signed on to the agreement, Schinas indicated.

Over the past week, Belgium missed two deadlines that the EU had set to agree to the deal and Canada briefly walked out of the trade talks before returning the next day.

Politicians in Wallonia, which is smaller than the U.S. state of New Jersey, argue that the proposed accord would undermine labour, environment and consumer standards.

Proponents say it would yield billions in added trade through tariff cuts and other measures to lower barriers to commerce. At the same time, the EU says it will keep in place the region’s strong safeguards on social, environmental and labour issues.

Magnette said a key hurdle was the issue of “private arbitration” in which multinationals can legally challenge governments on policies.

He said Wallonia a better deal would bolster EU standards and set a strong precedent for other trade talks between Europe and trading partners like the United States or Japan. The trade talks with the U.S. in particular have run into huge resistance in Europe, drawing public protests.