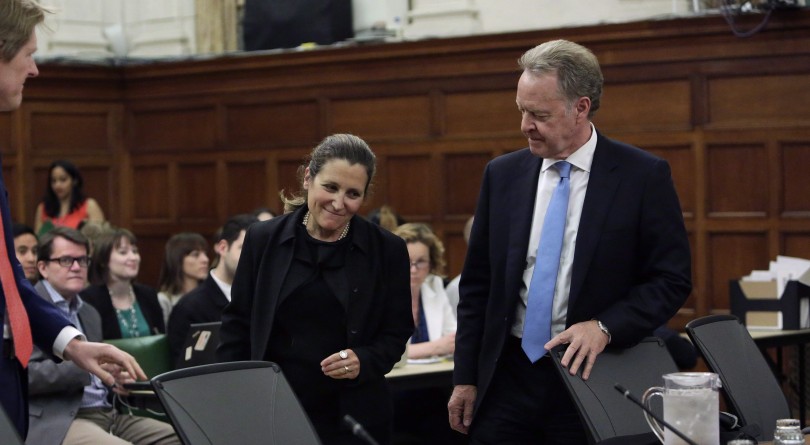 Freeland, who made a splash in Washington last week with her speech accepting Foreign Policy magazine’s “Diplomat of the Year” award, also said the Trudeau government is ready to respond quickly if Trump follows through on his recent threat to impose even more damaging tariffs on auto imports. Throughout her testimony, Freeland often alluded to strong public and cross-party political support for pushing back against Trump in what has the makings of an all-out trade war. Highlights:

Jumping on that tariff threat. Tory MP Erin O’Toole asked Freeland why the Liberal government didn’t push back harder last year at the first rumblings that the Trump administration might invoke national security, under Section 232 of the Trade Expansion Act of 1962, as a pretext for steel and aluminum tariffs, which were ultimately imposed on May 31.

Bracing for possible auto tariffs. Several MPs asked Freeland about growing fear about Trump’s threat to impose a 25 per cent tariffs on imported cars and light trucks, which would be devastating to Canada’s auto sector, especially in Ontario. She declined to give details, but stressed that when Trump hit steel and aluminum, Canada reacted right away with a detailed list of retaliatory tariffs. Many observers view those tariffs as targeting Trump’s political allies.

“We have to hope for the best and work for the best possible outcome, but always be prepared for every eventuality,” Freeland said, adding later, “The Prime Minister’s response and my own on May 31, when the Section 232 tariffs [on steel and aluminum] by the United States were announced, was firm, clear and resolute, and it spoke to detailed preparation. Our preparations in support of the auto sector are equally detailed and our supports will be equally firm and clear.”

Courting global and business support. Although the unconventional U.S. demands at the NAFTA renegotiation table have been almost impossible for Canada and Mexico to respond to constructively, and Trump’s steel and aluminum tariffs are a serious blow, his threat to impose auto tariffs is on a whole new level. Freeland said forging an international united front, while marshalling private-sector opposition in North America, is Canada’s strategy.

“Canada knows, and our partners around the world know—our partners in Europe, our partners in Asia, our partners in Mexico—that this would be an unprecedented act by the United States,” she said. “We have been very clear in explaining that to our American counterparts… It’s important for us also to be in very close conversation with Canadian and U.S. business about what the impact of such an action would be.”

A sunset clause isn’t the answer. Faced with growing risk of a real rupture in far Canada’s most important economic relationship, some observers suggest Ottawa should find a way to make peace with Trump. One idea: accept his proposal for a so-called “sunset clause” that would allow the U.S. to renew NAFTA—but on a far more tenuous basis. Freeland said Canada just can’t make that concession.

“The idea would be that every five years unless each country chose to opt back into NAFTA, that the treaty would cease to exist,” she said. “Canada is strongly opposed to that for a number of reasons. First and foremost, we see that the value of a trading agreement is that it allows businesses and workers to build permanent relationships. An agreement that expires every five years has much less value.”

Freeland, who rarely seems to be out of the news these days, is scheduled to speak on Wednesday afternoon at the Montréal Council on Foreign Relations.