Chrystia Freeland: The minister of being everywhere at once

Voted this year's hardest-working MP, Freeland spent most of the past year effectively doing two ministerial jobs at the same time 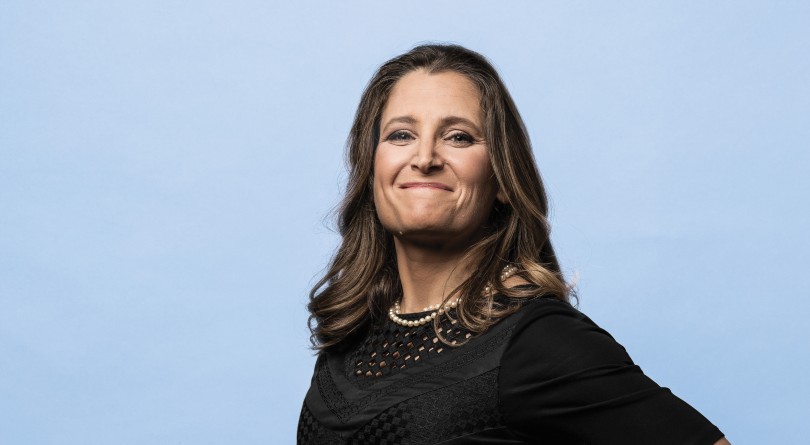 A skeptic might look at our Parliamentarians of the Year survey of MPs this year and wonder if the hardest-working category was entirely fair. Didn’t Prime Minister Justin Trudeau stack the deck in his early-2017 cabinet shuffle when he promoted Toronto MP Chrystia Freeland from trade minister to foreign minister but left her in charge of Canada-U.S. trade? That made Freeland both his minister for the world and minister for salvaging NAFTA.

The average Canadian might not have been aware of the double assignment Trudeau heaped onto Freeland’s shoulders. To draw a rough cross-border parallel from President Donald Trump’s administration, it would be as if Secretary of State Mike Pompeo and U.S. Trade Representative Robert Lighthizer—two of the most formidable figures in Trump’s cabinet—were the same guy. But close watchers of trade and foreign policy marvelled at how Freeland seemed to be everywhere at once over the past year. “She’s dealing with difficult, complex and highly sensitive Canada-U.S. trade issues, while as foreign minister she’s also responsible for dealing with the rest of the world,” says veteran Toronto-based trade lawyer Lawrence Herman. “She’s carrying an enormous load and discharging those burdens, I think, extremely effectively.”

How has she managed it? Officials who have worked closely with her tend to stress her pre-politics habits as a globe-trotting journalist. She takes in complex information quickly from a wide range of sources, and is constantly taking notes (sometimes in black ink on her hand). She uses long flights as a chance to keep up on books and other time-consuming reading. Still, insiders speculate about how long Trudeau will leave her in charge of her unprecedented mixed portfolio, now that NAFTA has been renegotiated into the new United States-Mexico-Canada Agreement.

One senior Liberal who has worked closely with Freeland, and asked not to be quoted by name, speculated that Trudeau must be at least considering whether Freeland should become a more conventional foreign minister, perhaps shifting the Canada-U.S. file to Trade Minister Jim Carr.

Freeland isn’t without her detractors in the House and beyond. Conservative Leader Andrew Scheer says a Tory government would have struck a better deal in the NAFTA renegotiations. Still, she drew votes from all parties to win the hardest-working title—a sign that even her critics don’t doubt she puts in the hours.

CORRECTION, Nov. 6, 2018: An earlier version of this story incorrectly identified the minister of international trade; it is Jim Carr.