Politics Insider for Sept. 16: The new FinMin talks 'a lot' to an old FinMin from the 90s, Americans lay down their arms in a trade war and Leslyn Lewis finds her seat 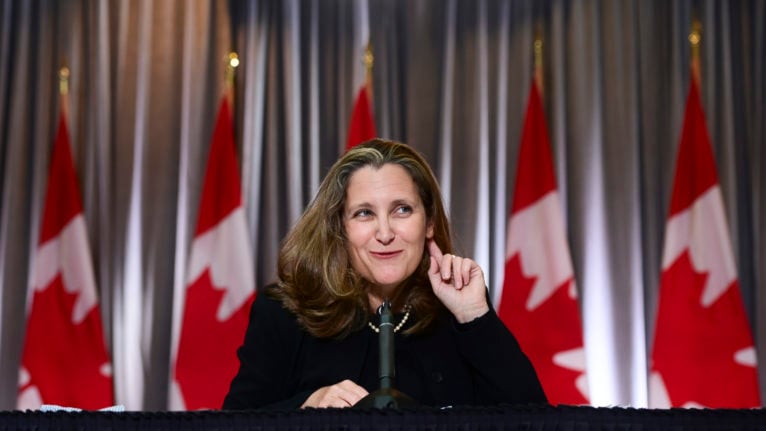 Minister of Finance Chrystia Freeland holds a news conference on the second day of the Liberal cabinet retreat in Ottawa on Tuesday, Sept. 15, 2020. (Sean Kilpatrick/CP)

Back to the future: Chrystia Freeland, the finance minister whose job is to take the reins from a spent Bill Morneau and chart a fiscal path forward for Canada, has rewound the clock nearly two decades. Freeland told reporters yesterday that she’s consulted a former prime minister whose resume is replete with a deficit-slashing run as finance minister. That’d be Paul Martin, an architect of austerity who knows a thing or two about facing down budgetary pressure. The two are talking “a lot,” FinMin to FinMin.

Farewell to the Liberals’ easy green revolution: After some ambitious talk of “building back better,” the feds appear to be tacking gently rightward on the heels of a conversation between Freeland and Canadian bank heads. Freeland extolled Canada’s well-worn rep for “wise and prudent fiscal management.” Paul Wells, writing in Maclean’s, finds clues about Liberal pandemic policymaking in a speech former Trudeau confidant Gerry Butts delivered at the virtual Recovery Summit (watch that here). Butts cautioned against any urge to use the pandemic as an excuse for pet policy projects that achieve pre-ordained goals divorced from problems people are having in the real world. Writes Wells:

Liberals are coming to terms with the realization that COVID-19 didn’t cancel gravity or smite the foes of progress, as they define progress, from the earth. When Parliament returns next week, it will still be a venue of measurable personal risk for its occupants, like any large room for the foreseeable future. It will still contain more MPs who aren’t Liberals than MPs who are. It will be watched by a population that is worried, defensive, and incapable of ignoring risk for the sake of a resounding slogan. It speaks well of the Liberals that they have spent the summer working some goofy rhetoric out of their systems before returning to the real world.

The finance minister also reacted to the eleventh-hour decision south of the border to cease the slapping of tariffs on imported Canadian aluminum. Just as Canada was set to retaliate, U.S. Trade Representative Robert Lighthizer published a statement that walked back the American position—ostensibly based on a revelation that imports were “likely to normalize” after surges earlier in 2020. Lighthizer maintained the spectre of punitive action down the road, if imports jumped beyond a certain tonnage. Freeland, who’s still cabinet’s point person on Canada-U.S. affairs, made her position clear. “This is not a negotiated deal…we have not agreed to anything.”

Turns out Justin Trudeau wasn’t lying when he said his government was “engaging” with the opposition on “multiple levels.” He just forgot to use the future tense. A spokesperson told reporters the PM would speak to all party leaders by the end of the week, during which the first order of business will be Throne Speech advocacy—and, presumably, some toing and froing on the confidence vote to follow in the House of Commons next week.

Why is Patty Hajdu still the minister of health? Canada’s health minister is facing some heat for her early handling of the global pandemic. Hajdu continues to cautiously defend China’s conduct in the early days, she was never briefed on a made-in-Canada early warning system that had fallen mostly into disuse, and as American intelligence appeared to catch on to the dangers of COVID-19 in the early months of 2020, Canada appeared ill-prepared. Andrew MacDougall, writing in Maclean’s, says it all adds up to failure. And the health minister needs to answer for her shortcomings.

Would it be madness to change horses in the midst of a raging global pandemic? Sure, but Trudeau already has form. If the Prime Minister can fire his finance minister in the midst of a deep global recession over ‘policy differences’ (wink wink cough), he can easily swap health ministers during a global pandemic. So guess what, Patty Hadju: You’re all set to be “Canada’s Candidate” as director-general of the World Health Organization.

One of the enduring instructions of the pandemic is: don’t go to work if you’re sick. Early this month, a Parliamentary Protective Service employee failed that test. On Sept. 2, they experienced coronavirus symptoms and got tested the next day. On Sept. 8, they went about their business in and around the Hill. Their test came back positive, and they informed their employer on Sept. 10. Contact tracers found 19 individuals who had been near them in the interim.

Leslyn Lewis has found her seat. The upstart third-place finisher in this summer’s Tory leadership race has her eyes on Haldimand-Norfolk, a southwestern Ontario riding that was last Liberal before the 2004 election. Diane Finley has held the district since 2004 and isn’t seeking reelection. Before she dropped off, Lewis won more than 50 per cent of the riding’s leadership votes on the second ballot last August.

He nailed it: Philippe J. Fournier, the 338Canada polling analyst and Maclean’s contributing editor, predicted all but two seats in the New Brunswick election. Next up, Saskatchewan. And if you’re on the hunt for a U.S. election oracle, Fournier also has his eye stateside. In case you want to win a bet.