Chrystia Freeland's hard winter with high debt, sectoral support and so many promises

Politics Insider for Dec. 3: The finance minister tables her first fiscal update, the feds defer controversial firearms regulations and Canada's pandas are back in China 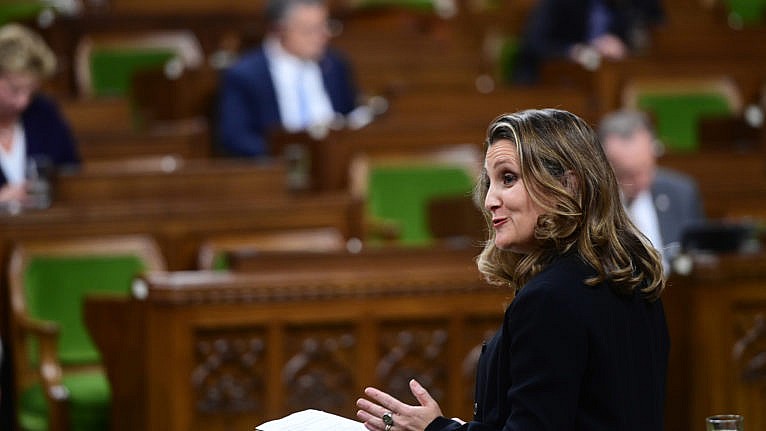 Minister of Finance Chrystia Freeland delivers the 2020 fiscal update in the House of Commons on Parliament Hill in Ottawa on Monday, Nov. 30, 2020. (Sean Kilpatrick/CP)

It wasn’t a full-fledged federal budget, but Finance Minister Chrystia Freeland‘s maiden fiscal and economic statement gifted the nation 237 pages of estimates, plans and projections, as well as an early forecast of a post-pandemic Canada. The headline numbers were all just as unprecedented as Bill Morneau’s summertime snapshot: a $381-billion deficit (and maybe more), a national debt that’ll top a trillion bucks and up to $100 billion in future stimulus.

Freeland’s trust exercise: Paul Wells looked to the fiscal update as an opportunity to learn about all the timelines, costs and plans involved in achieving the Liberal mantra of “building back better.” What he found was a plan not all that dissimilar from Bill Morneau’s fiscal vision, as well as a lot of promises—but not a whole lot of precision on when the recovering will all get done.

How much is this crisis going to cost, anyway—in dollars, if not in human suffering, which will always be harder to tally? What does “building back better” entail? How will the Trudeau government redress the disproportionate burden of the 2020 economic crisis on women? Which criteria will guide its spending decisions after the crisis ends, or indeed after the sun rises tomorrow? Today was the day Chrystia Freeland finally delivered answers to these questions and more, and in every case her answer was “I will tell you the answer some other time.”

We are in for a hard winter: Shannon Proudfoot noted a recurring rhetorical theme in the fiscal update and the Freeland speech that gave it voice. The finance minister both stated an obvious, literal truth and painted an age-old pastiche: right now, it is winter. One day, it’ll be spring. The entire Liberal package, for all its billions in spending, is premised on everyone buying into that simple notion of the awful present and the hopeful future:

This theme was mined to a near-comedic degree in Freeland’s remarks to the House of Commons when she tabled the fall economic statement on Monday, and throughout the document itself. But the details make it clear that in terms of any big green or progressive reimagining, this is a roadmap built for winter and not yet an ambitious spring, given that the country is still hunkered down under a gathering snowstorm.

The Liberal economic long game: The party in power wants the Canadian people to know these things: debt is cheap because interest rates are low, a vaccine could be on the way in the near future and every economic forecast says growth will be the name of the game in 2021 (and beyond). So forget all the scare headlines about red ink, they’ll say, and focus on the stability that will soon replace uncertainty. Of course, the opposition will never see things that way:

The Liberals will be the party that set new deficit records and plunged the nation into debt worth $1 trillion, and counting, with no plan to reduce it. Any stimulus package is guaranteed to raise the ire of opposition politicians waiting to pounce on any hint of pork barrelling, red tape or ideological favouritism. And they’ll howl about how the Liberals never tabled a full budget in 2020.

Five takeaways from the fiscal update: Prajakta Dhopade combed through the document in search of spending that either responded to urgent health-care needs or checked off a Liberal election promise. She found money for long-term care, the airline industry, tree planting, indebted students and workers who work remotely (as well as those who can’t).

Yesterday was Freeland’s day in the spotlight. Today, Prime Minister Justin Trudeau will defend his government’s plan at a press conference in front of his home at Rideau Cottage—and later will attend question period in the Commons.

File this one under “buried items on Fiscal Update Day.” Public Safety Canada announced a second deferral of a new “firearms marking” regime that could eventually force manufacturers to stamp certain identifying information on guns (the first deferral came in 2018, and the regulations were first introduced in 2004). A statement from the department promises “continued” consultations. The feds ended the missive by heading off gun-lobby speculation at the pass: “The Government will not reintroduce the long-gun registry.”

The pandas are home: A few months back, Da Mao and Er Shun‘s prospects for healthy living looked bleak. The Calgary Zoo was running out of bamboo (the Canadian source of which was unclear), and a return trip home to China was iced because of what the zoo called “emerging government sensitivities.”  The Chinese side appears to have sorted itself out, though, because the zoo announced the pandas returned to China after a marathon journey by way of a “diverted Lufthansa Cargo flight” to Frankfurt, Germany. 欢迎回家.