Clusterduff at two weeks: Some questions that might be answered

There is so much we don't know

It was two weeks ago tonight that CTV first reported that Nigel Wright and Mike Duffy had been involved in some kind of arrangement in regards to the latter’s disputed expenses. The next morning, the Prime Minister’s Office confirmed that Mr. Wright had written Mr. Duffy a personal cheque to cover the expenses. Within two days, Mike Duffy had resigned from the Conservative caucus and three days after that Nigel Wright resigned as the Prime Minister’s chief of staff.

The ethics commissioner and the Senate’s ethics officer are apparently reviewing the matter, the Senate’s internal economy committee has begun a new review of Mr. Duffy’s expenses, the RCMP has apparently requested documents from the Senate and the Prime Minister has proclaimed himself to be “frustrated and angry and sorry about all of this,” but for all that has occurred and been said over the last 14 days, we don’t know much more than we did on that Wednesday morning when the PMO confirmed that Mr. Wright had written a cheque. So let’s tally up the questions that remain unanswered, or might at least be asked.

Did Mr. Duffy, as he apparently suggested to CTV, take out a loan to cover his disputed expenses? If so, why?

Why did five days elapse between the acknowledgement of an agreement and Mr. Wright’s resignation? Did the Prime Minister lose confidence in Mr. Wright? If so, when?

Is the Prime Minister’s Office in possession of any documents or correspondence that relate to Mr. Wright’s discussions with Mr. Duffy?

Is there, as the Liberals have suggested, an email dated February 20 that provides some insight into the agreement between Mr. Wright and Mr. Duffy? If so, is the Prime Minister’s Office in possession of this email?

In related news, a Senate cheat sheet:Click on the image for a larger version. 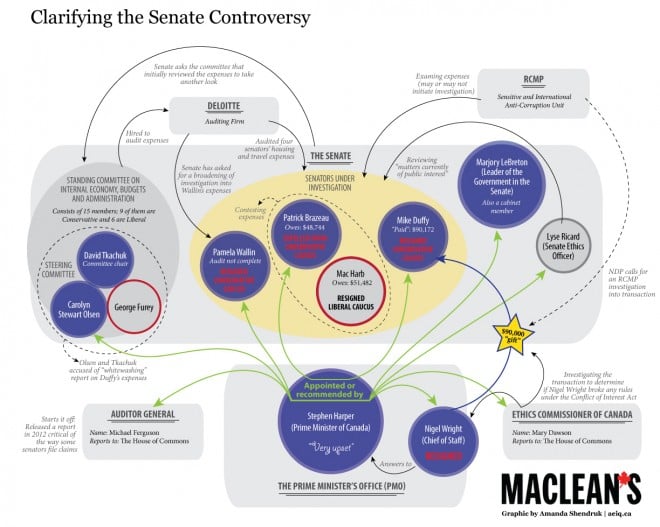