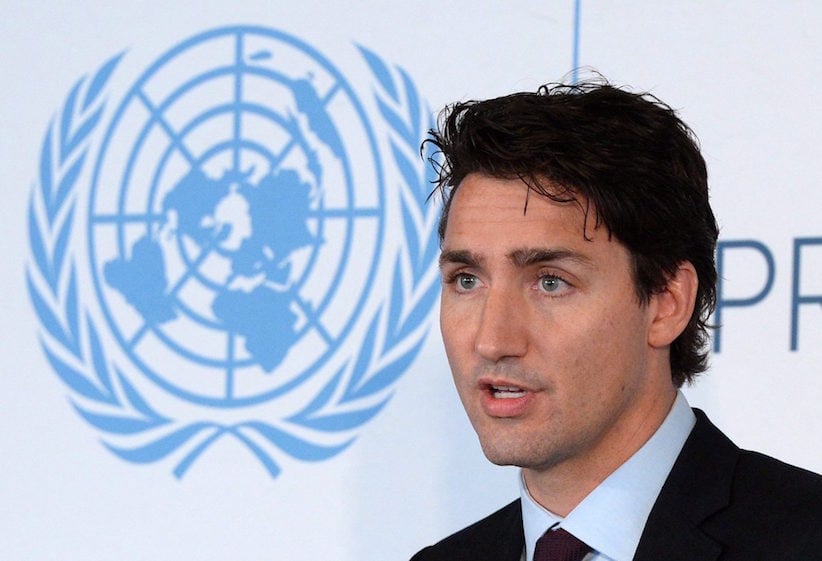 Prime Minister Justin Trudeau delivered his first speech to the United Nations General Assembly this afternoon, nearly 10 years to the day after his predecessor, Stephen Harper, made his inaugural address in the same New York temple to multilateralism.

Both speeches ran about 1,500 words, and that’s about all they had in common. The contrast will come as no surprise. Trudeau has given the UN pride of place in his foreign policy, reemphasizing Canada’s commitment to peacekeeping, which is central not just to his Liberal party’s policy but also to its defining mythology. And he’s seeking a temporary seat for Canada on the UN security council.

Harper was critical of the UN from the outset, not an uncommon bent among Conservatives, although by the end of his nine years in power he had surprised many by making a UN-led maternal and child health program a policy centrepiece. Still, his Tory government lost its bid for a turn on the security council membership, a significant embarrassment.

Comparing and contrasting Harper’s Sept. 21, 2006 address and Trudeau’s of Sept. 20, 2016 offers a study in starkly different approaches. (The quotes below rely on an advance text of Trudeau’s speech.)

Harper launches with minimal fuss straight into a description of Canada’s contribution to the United Nations Assistance Mission in Afghanistan, but also, more importantly, the deployment of 2,500 Canadian troops to the U.S.-led military campaign against the Taliban:

“All our actions in Afghanistan – civilian and military – are being taken in accordance with the mandate of the United Nations Security Council. In short, we all stand together with the democratically elected government of Afghanistan under the banner of the organization that represents our collective will.

“Let us be realistic. The challenges facing Afghanistan are enormous. There will be no quick fixes. Moreover, success cannot be assured by military means alone. This we all recognize. For success also requires a strong and unwavering civilian contribution: educators, engineers, elections advisors; direct aid and technical assistance. ”

Rather than draw attention to some signature contribution abroad, Trudeau opens by talking about what he learned during last year’s Canadian election race in “coffee shops and church basements and mosques and synagogues.” He says he met Canadians who were optimistic but also feeling anxiety about their economic future, and then he widened his field of vision:

“When leaders are faced with citizens’ anxiety, we have a choice to make: Do we exploit that anxiety or do we allay it? Exploiting it is easy. But in order to allay it, we need to be prepared to answer some very direct questions.

After his detailed opening section on Afghanistan, Harper switches to a critique of the UN itself. It’s only here that he allows himself a brief reference to Canadian domestic affairs, holding up as a model his young minority government’s early emphasis on a manageably short list of priorities and a push for more transparency. He touches on longstanding conservative misgivings about the UN:

“Will the new Human Rights Council become a forum where human rights are genuinely put above political maneuvering? Or will it emulate the fate of its failed predecessor organization? But I must tell you, the early signals suggest that too little has changed, that the page has not yet been turned.

“And what will be done to make progress on UN management reform? Earlier this year, Canada’s new government was given a mandate to make our national government more accountable, to ensure taxpayers get full value for their money, and to pursue a clear, focused agenda that produces tangible results. The United Nations should accept nothing less.”

Trudeau didn’t come to the UN to gripe about its shortcomings. Instead, he bridges from talking about listening to the anxieties of middle-class Canadians, to extending much the same perspective out into the wide world—even to refugee populations. After soaking up some applause on mentioning Canada’s welcome of 31,000 Syrian refugees, Trudeau goes on to say this:

“You see, refugees are people with the same hopes and dreams as our own citizens. But where while our people have felt anxiety, Syrians faced catastrophe. Do you want to know where Syria’s middle class is? They’re living in refugee camps in Turkey, Lebanon, and Jordan.

“They’re moving across Europe, looking for a place to set down roots, get their kids back in school, find steady work, and be productive citizens. Refugee camps are teeming with Syria’s middle class. Doctors and lawyers. Teachers and entrepreneurs. They’re well educated. They work hard.” 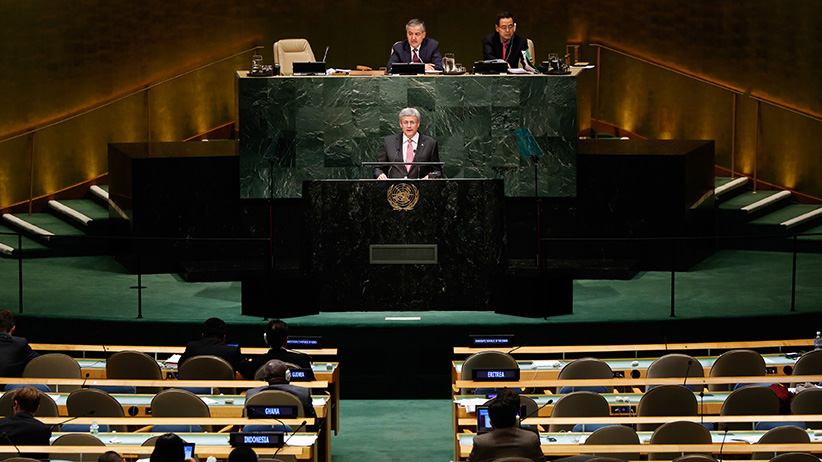 Harper ends by circling back to Afghanistan. But he returns to that core topic only after pointedly noting that the UN isn’t just about lofty goals, observing that Canada joined the organization, more than 60 years ago, in order to advance both “our own pragmatic interests and noble aspirations for all of humanity.” And with that balance of realism and idealism established, he concludes:

“Today, Afghanistan leads the list of challenges that we face collectively: peace-building in a nation where there is not yet peace, and where progress requires a wide range of capabilities undertaken by a wide array of our member-states.

“My earnest hope is that we will say with pride to future generations of leaders: we, the United Nations, took up that responsibility in Afghanistan, rose to the challenge, and met it firmly, collectively, successfully.”

Trudeau also circles around, too, in a way. But there is nothing comparable in his text to Harper’s attention to a clearly defined foreign policy challenge. Instead, Trudeau alludes, without quite saying so, to a far broader worry—the political climate created by Donald Trump’s presidential candidacy, and by Europe’s ongoing refugee challenge, and perhaps by a prolonged stretch of slow global economic growth:

“Every single day, we need to choose hope over fear, and diversity over division. Fear has never fed a family nor created a single job. And those who exploit it will never solve the problems that have created such anxiety.

“Our citizens, the nearly 7.5 billion people we collectively serve, are better than the cynics and pessimists think they are. They want their problems solved not exploited. Listen, Canada is a modest country. We know we can’t solve these problems alone. We know we need to do this all together. We know it will be hard work. But we’re Canadian and we’re here to help.”