Compromising positions: Ignatieff and the HST 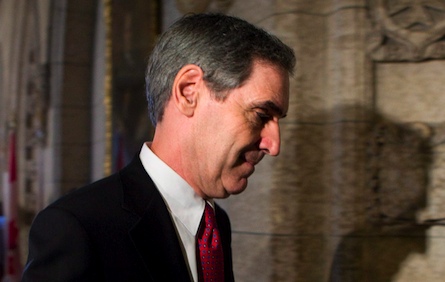 It came at the tail end of the scrum, which is probably why it garnered relatively little media coverage. But even in mid-liveblog mode, an ITQ eyebrow went up when Michael Ignatieff was asked about his party’s seemingly contradictory position on the GST/PST harmonization plans in British Columbia and Ontario.

Instead of simply answering the question, he reminded reporters that he’s the leader of the opposition, not the government, and, as such, “doesn’t have to have a position” — which, as far as he is concerned, meant that he didn’t have to clarify it.

Which, of course, is true: No one held a gun to his head and forced him to pick a side in the Great HST Debate of 2009.  Unfortunately for Ignatieff, however, not only did he take a position, but for a while, there, he seems to been have holding both of them — at the same time. The facts, as the Narrator might say, were these:

At some point during the last few weeks, someone at OLO made the strategic decision to go after the government on the HST deals in British Columbia in Ontario,almost certainly to boost Liberal support in two regions where it is both critical and — at least, according to the most recent polls — starting to slide.

Given the widespread public outrage over the tax — particularly in BC, but likely to grow in Ontario as well — it must have seemed, on the surface, like a smart move, particularly in what then seemed likely to be the leadup to a fall campaign.

The catch? Apparently, around the same time, someone else at OLO had given Ontario Premier Dalton McGuinty the distinct impression that a future Liberal government would honour the existing agreement with Ottawa. Which is why when he was asked about it in a scrum last week, McGuinty was only too happy to go on the record with his understanding of Ignatieff’s views on the HST deal.

Not surprisingly, this left the federal Liberals rather unexpectedly on the defensive. John McCallum, the party’s finance critic, assured Hill reporters that the premier would soon be issuing a “clarification”. A few hours later,  McGuinty’s office released a terse statement that, as it turned out, didn’t clarify much at all, except that the wink-and-a-nod on the HST didn’t come from Ignatieff himself, but some unnamed — but  surely fairly senior — member of his team.

If that is what happened — and as far as ITQ knows, nobody at OLO has denied it — it isn’t hard to see why McGuinty would have assumed that the deal was safe, and after Ignatieff’s comments last Friday, he — not to mention the rest of us — deserve to know whether he was misled — unintentionally or otherwise — by someone speaking on Ignatieff’s behalf.

Really, when you get down to it, it goes to credibility — Ignatieff’s, that is, and not just on the HST, but in general. It would be different if this was the first time that we’d seen the Liberal leader attempt to have it both ways on a contentious issue, but it isn’t. (Round one of Ignatieff vs. Asbestos, anyone?) If he and his party are planning to campaign on the prime minister’s behind-closed-doors musings, he’d better make sure that he isn’t just as vulnerable to that line of attack.

FILED UNDER: but it's not hypocrisy if you really mean it both times Dalton McGuinty hst the variable ignatieff