Tories have fallen to fourth in Quebec, behind the NDP 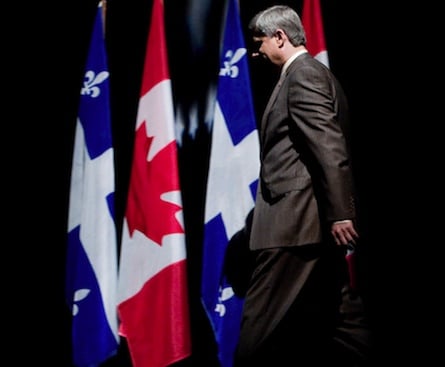 New large-sample Quebec poll, taken during the first four days of the Conservatives’ new ad campaign, shows the Conservative party has fallen to fourth in Quebec, behind the NDP. Stephen Harper’s party is now polling about as well as the sum of the performance of Stockwell Day’s Canadian Alliance and Joe Clark’s Progressive Conservatives in 2000. So it’s going pretty well, really.

UPDATE: The new ads are working with unprecedented speed. Why, it took only days for the Conservatives to drive their numbers down to the same 15% level the Liberals were at in Quebec a year ago, after months of anti-Dion ads. And that’s what Harper wanted to do, right? Drive his party support down to Dion-like levels in Quebec, right? Yes? No?

UP-IS-THE-NEW-DOWNDATE, Monday morning: Still, it’s important to keep hope alive. That’s why (both of these links are to Le Devoir articles in Conservative Party-approved Quebec-French) Chantal Hébert explains the Conservatives have hitched their wagons irrevocably to the Action Démocratique in Quebec. Super Mario’s old party “may be a shadow of what it once was,” Chantal writes, “it’s still in better shape than the federal Conservative party.” And how’s that working out? The rest of today’s poll shows the ADQ at 8%.

So cheer up, Conservatives. The boss has a master plan to cut your party’s remaining Quebec support in half! I hear Dimitri and Leo are working on it full time.