Conservative leadership debate moves ahead by looking back 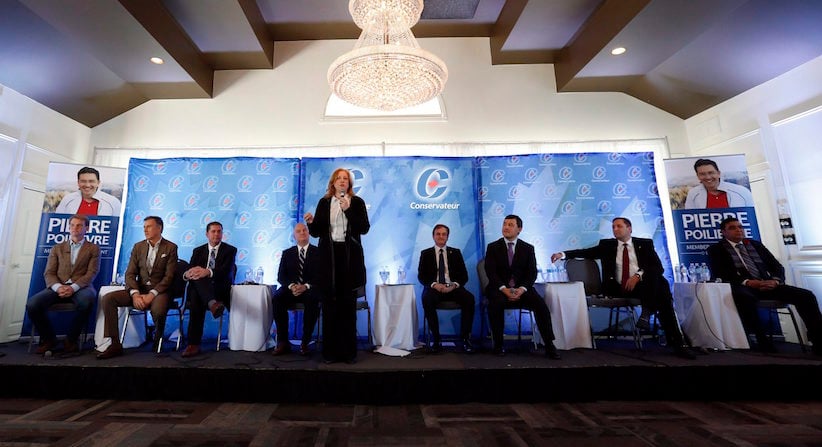 GREELY, Ont. – A two-hour debate Sunday among nine rivals for the federal Conservative leadership often morphed into an autopsy of the party’s ill-fated 2015 election campaign.

Candidates clashed over whether to make party membership free, called for a more positive message to Canadians and lamented the party’s failure to master social media.

“We need to build a much bigger Conservative party,” Chong said.

Longtime Calgary MP Deepak Obhrai echoed the sentiment: “We need to build that base.”

The Conservatives are trying to rebound from a resounding loss in the October 2015 ballot that saw Justin Trudeau’s Liberals win a majority, reducing the Tories to official Opposition status. Many party members have since complained that the party failed to generate enthusiasm with its largely stay-the-course proposals.

The Conservatives must be more than an opposition party, said former British Columbia MP Andrew Saxton.

“We need to be a proposition party. We must offer a relevant contrast to Justin Trudeau.”

“It wasn’t our policies, it was the way we spoke about them,” Scheer said.

“We ran a very negative campaign.”

Chong drew hoots from the audience when he endorsed a carbon tax to give the party a credible position on tackling climate change and attract new supporters.

His idea was flatly opposed by some, including Saskatchewan MP Brad Trost: “I don’t believe climate change is a real threat.”

And Erin O’Toole, an Ontario MP and former cabinet minister under Stephen Harper, rejected Chong’s proposal of free party memberships, suggesting something of value must have a price tag.

In all, 12 people are running to be the next Conservative leader, who will be chosen in May.

The event Sunday at a conference centre south of Ottawa was fuelled by questions from a larger-than-expected crowd of party faithful, and was mostly free of personal attacks, controversial quips or mention of U.S. president-elect Donald Trump.

The most noticeable absentee was Kellie Leitch. The Ontario MP attended the luncheon portion but left before the debate to deal with a break-in to the garage of her Creemore, Ont., home, said her campaign manager, Nick Kouvalis.

In an interview broadcast Sunday she said her enthusiasm for Trump does not make her a racist.

During an exchange on CTV’s Question Period, Chong suggested Leitch was importing the divisive style practised by the president-elect.

Leitch proposes screening newcomers for Canadian values, and says she shares some ideas with Trump on immigration.

Leitch has attracted headlines — and some barbs from other leadership contenders — for her immigration screening proposal, which she has yet to flesh out. She denies endorsing the controversial Trump.

“I am not a racist,” Leitch said during the CTV segment. “I am not a person who’s out groping other individuals. I do not do those things and I don’t think that the Canadians who support the ideas I’m talking about do those types of things.”

During the Sunday debate, O’Toole touched on the broader notion of how people see the Conservatives, noting that during the last campaign “too often we let our opponents define us.”