Why Conservative hopefuls have taken to posing with guns to win over supporters, and what message their choice of weapon sends 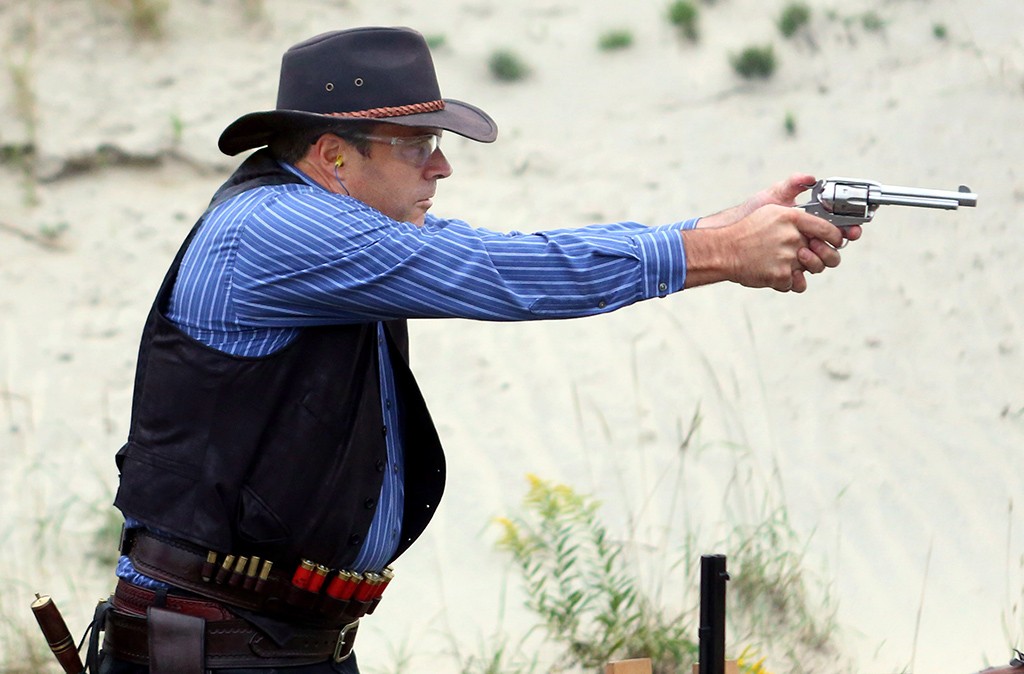 Based on a recent email blast to her supporters, Kellie Leitch appears to have a pretty steady hand at the gun range. In two photos her campaign distributed, one shows the Conservative leadership contender with her arms fully extended holding a 1972 Walther P1, a 9mm pistol, while the second photo shows where her bullets ended up—all near the bullseye.

Of course, Leitch wasn’t the first candidate in the leadership race to take up arms. Kevin O’Leary was more than keen to show off his gun-happy credentials in February with a video of him at the range using, among other high-powered weapons, an AR-15 rifle.

“All of a sudden, it’s almost obligatory for the Conservatives in this leadership campaign to have a firearms policy or talk about how their granddaddy used to go duck hunting,” says A.J. Somerset, the London, Ont.-based author of Arms: The Culture and Credo of the Gun. “Gun owners who are committed about gun politics are committed voters. The leadership candidates know if they don’t pander to gun owners, they don’t get to be somebody’s second choice, which matters on a ranked ballot.”

Perhaps that explains why the majority of the 14 candidates vying to be the next leader of the Conservative Party have a firearms policy fleshed out on their official websites. But while some might focus on policy, the pandering of Leitch and O’Leary might actually be a way to appease the pro-gun community whose cause the duo have not been fighting for very long.

“My grandfather was a farmer in Manitoba. He hunted duck and goose and was an active member of Ducks Unlimited,” Leitch wrote on the section of her website laying out her firearms policy. “I grew up in Fort McMurray where hunting is a part of the fabric of life and I have signed up for my own gun license.”

Emphasis on “signed up for.” Leitch doesn’t currently have a gun license. Even so, posing with a handgun was a targeted move, Somerset argues. “By being photographed with a handgun, it shows that [politicians] are in solidarity with the most committed—and extremist—group of gun owners,” he says. “People who own handguns tend to be the people who want all gun control thrown out. They fear the end game of gun control is to confiscate their collections.”

As for O’Leary shooting an AR-15 rifle, that might simply be him taking aim at major damage control. That’s because months before he announced he was running for the Conservative leadership, and in the aftermath of the Orlando night club shooting, O’Leary said, “The majority of the damage was done with a weapon that shoots 700 rounds in a minute. There is no need for anybody to have that.” In that interview with Evan Solomon, O’Leary went on to say he himself has tried out an AR-15 at the range, a gun so powerful it could only be used for killing people, not hunting. “That is a weapon that is just used to kill everybody in the room you’re in,” he said. “Who should have that? Nobody.”

Unless you’re running for the Conservative leadership, that is.

“The message he’s sending with an AR-15 is he’s in with the most pro-gun, anti-control Canadians,” Somerset says. “O’Leary has to go that extra step because he said in the past he doesn’t believe people should have AR-15s. That’s a huge liability. Gun activists don’t forgive and they have good memories.”

Nor do anti-gun activists, and the video of O’Leary shooting the AR-15 couldn’t have been more ill-timed. The video was released the same day as a funeral for some of the victims of the Quebec mosque shooting. Criticism was immediate, and O’Leary quickly took down the video, saying he did so out of respect for the day’s service.

But the fight for the Conservative gun lover vote panders on. While the rest of the candidates haven’t gone full Rambo in their photo-ops this year, others have previously posed with a gun to bolster their image. Turn back the clock four years, and you’ll find photos of Pierre Lemieux dressed as though he’s in the Wild Wild West, six-shooter in hand, to talk about joining a “cowboy action shooting” club and dubbing himself “the Lawman.”

“If you’re a cowboy action shooter, you own handguns,” Somerset says of the photo-op that causes him to chuckle. “Single action revolvers are a big part of that. The message being sent is he’s with the hardcore group of gun owners.”

Meanwhile, the firearms policy webpage for Brad Trost includes a photo of what would appear to be the candidate with a pump-action shotgun. “If you’re seen with a shotgun for duck hunting, you’re sending a different message than if you had a handgun on the range,” Somerset adds. “Those are different sub-communities.” And those sub-communities might not all agree on the right for people to own AR-15s or handguns—you know, weapons that aren’t used to shoot quail.

The gun-toting photo-op is hardly a new affair in Canada. Former prime minister Stephen Harper once posed in the Arctic laying on his stomach with a rifle for some target practice with the Canadian Rangers. Even the late Jack Layton, a longtime supporter of the long-gun registry, once posed with a high-powered firearm on a naval vessel. Granted, neither of the two former federal leaders were running in an election when the photos came out.

But if American politics has taught Canadians anything, it’s that the pro-gun lobby can be a powerful voting bloc. “The gun culture has become increasingly politically aligned with a fringe right—with people like Trump,” Somerset says. “I don’t know if we can call them fringe anymore.”