Results remain strong in the province for the Tories 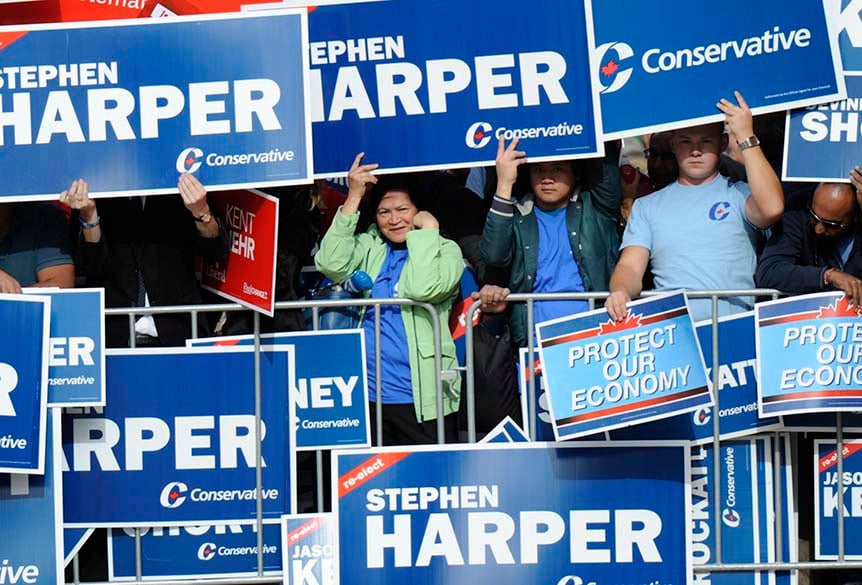 Supporters line up between placards outside studios at Stampede Park before the Globe and Mail Leaders Debate in Calgary, Alberta September 17, 2015. (MIKE STURK/Reuters)

EDMONTON – While Justin Trudeau and his federal Liberals were projected to win government in Monday’s federal election, the Conservative party was poised to continue its dominance in Alberta.

Alberta had six new seats due to riding redistribution, bringing the total to 34. Heading into the vote, 26 of the 28 seats had been Conservative.
The Liberals and New Democrats were close in some ridings Monday.

Up north, NDP candidate Janis Irwin was behind Conservative Kerry Diotte in Edmonton-Griesbach.

NDP incumbent Linda Duncan was out front early in her bid to win a third consecutive term in Edmonton-Strathcona.

The province has been a conservative bastion for close to 60 years, beginning in 1958 when the Progressive Conservatives swept the province to help give prime minister John Diefenbaker a majority government.

Small-c conservatives have dominated Alberta in the last 18 elections, with the PCs, the Reform Party, the Canadian Alliance and the Conservative Party holding power respectively.

The Liberals had hoped to gain a bounce from Trudeau’s national campaign to win its first seat in Alberta – in Edmonton – since 2006.

In Calgary, they were pinning their hopes on Hehr and Darshan Kang, another former member of the provincial legislature, in Calgary Skyview.

A Liberal win in Calgary would be the first in that city since Patrick Mahoney captured Calgary South in 1968 – one of four Alberta seats taken by the Liberals in the euphoria of Trudeaumania under Trudeau’s father, Pierre.

The NDP had its fingers crossed that the history-making May election win by Rachel Notley and the provincial wing of the party would aid federal fortunes.

Historically, the NDP has been a mere pinprick on Alberta’s federal electoral map. Only two NDPers have ever won in the province: Ross Harvey in Edmonton East in 1988 and Duncan in 2008 and 2011.

In the last 60 years, the NDP has averaged less than 10 per cent of the popular vote.
Notley tried to walk a fine line during the 78-day election campaign, promoting NDP Leader Thomas Mulcair but promising to work with whomever sits in 24 Sussex Drive.

The Conservatives had a lot of turnover heading into the campaign. Eight incumbents retired or, in the case of Rob Anders, couldn’t win a party nomination.