Conservatives 'united' behind Scheer, for now 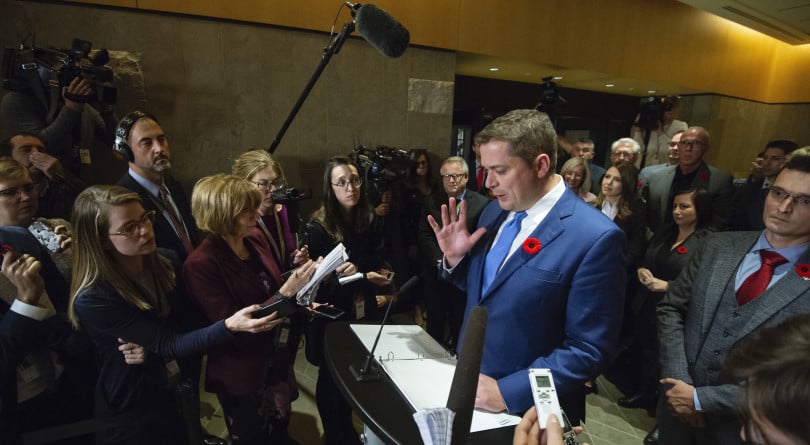 Survivor, Conservative edition: During their first gathering since the election, Conservative MPs threw Andrew Scheer a lifeline when they voted not to adopt rules that would have opened the door to an immediate leadership vote. Instead the Conservative caucus opted to leave it to members to decide Scheer’s fate when the party holds a mandatory leadership review at its April convention in Toronto. A favourable outcome for Scheer from that review is by no means certain — a new Angus Reid survey of people who voted Conservative in the last election found 42 per cent think Scheer should step down as leader. But for now Scheer is safe, and the party, he said, is “united.”

In the meantime John Baird will conduct a review of what went wrong, and right, with the Conservative campaign. Scheer said he hopes to get the results back “as quickly as possible” but in a scrum with reporters after the caucus meeting, post-election Scheer sounded much the same as campaign-Scheer, arguing that the real problem the Conservatives had in the last election was “communication.” As in, the large number of voters in Ontario and Quebec who were uncomfortable with his personal opposition to gay marriage and abortion was the result of the party not effectively communicating its belief that every Canadian has “inherent value,” or that the majority of Canadians who want action on climate change and found the Conservative climate plan lacking did so because the party failed to properly communicate the benefits of scrapping the carbon tax, which Scheer said is still his plan: “I have never known a problem to be solved by a new tax.” So for Scheer the takeaway from the campaign seems to be: keep the platform, get better soundbites.

Goodbye, so long, farewell: The most common refrain from Scheer on Wednesday night was that Justin Trudeau lost one million votes between 2015 and 2019 and returns to Ottawa with “the weakest mandate in Canadian history.” But while, as Paul Wells notes, Liberals sound more triumphant than chastened at the moment, Trudeau is about to get a personal reminder of what he lost in the election. The Liberals lost 20 seats on Oct 21, and surviving MPs will meet with their defeated brethren today to “give thanks.” Trudeau will attend the information session. Chief government whip Mark Holland, who organized the event, told the Toronto Star it will be “cathartic” for those MPs dealing with political defeat: “It’s like travelling at 100 km/h on the 401 and hitting a brick wall. Everything stops.”

USMCA/CUSMA/JUSTDOIT: Parliament may be on indefinite hiatus, but one of the most pressing issues from Trudeau’s first term got a little bit clearer Wednesday when he and Chrystia Freeland (still Canada’s foreign minister, for now) met with a powerful Democrat about ratifying the CUSMA trade deal. Richard Neal, chair of the U.S. House of Representatives’ Ways and Means Committee, said Democrats have no plans to reopen the deal, which would lead to lengthy delays and easily scuttle the agreement. “I think what we’re going to prioritize here is clearly the issue of labour enforcement, and we think that on USMCA, we’re very close but we need some guarantees as it relates not just to Canada but also their help as it relates to Mexico,” he said.