Conviction is inevitable for Canadians charged with espionage in China. Is the death penalty? 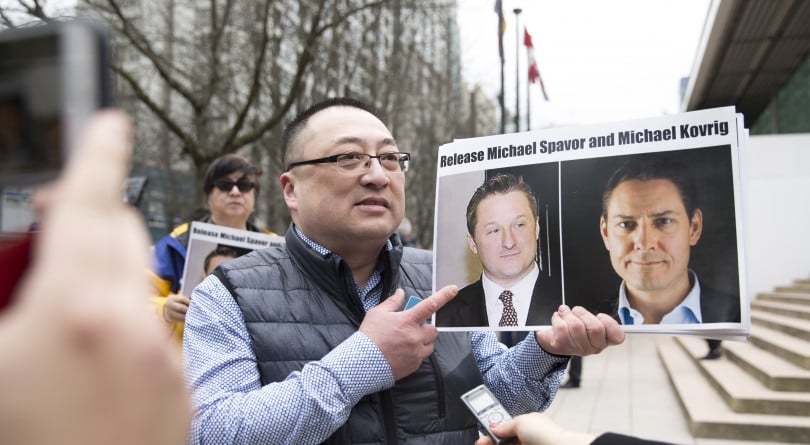 Louis Huang of Vancouver Freedom and Democracy for China holds photos of Canadians Michael Spavor and Michael Kovrig, who are being detained by China, outside British Columbia Supreme Court, in Vancouver, on March 6, 2019, as Huawei Chief Financial Officer Meng Wanzhou appears in court. (JASON REDMOND/AFP/Getty Images)

Turning the screw: Two Canadians seized and held in isolation by Chinese authorities since December were formally charged with espionage, Beijing’s latest move to punish Canada for detaining a Huawei telecom executive on a U.S. arrest warrant. China accuses Michael Kovrig and Michael Spavor of “stealing secrets and illegally providing them to overseas forces.” Prime Minister Justin Trudeau, while condemning the charges as “unacceptable,” also seemed to refer to China has a democracy: “The Chinese government is not following the same kinds of rules and principles that the large majority of democracies follow.” Must have been a slip of the tongue. After all, Trudeau is well aware of China’s “basic dictatorship.” (Global News, Twitter video)

The grim reality for both men is that their fates are already sealed, says former Canadian ambassador to China Guy Saint-Jacques: “Once you are formally accused in the Chinese system, you are found guilty in 99.9 per cent of the cases. What we’ll have to watch now is what is exactly the nature of the accusations and whether the penalty could include the death penalty.” (CBC News)

Start it up: It was Trudeau who got the ball rolling on the RCMP investigation that ultimately led to breach of trust charges against Vice-Admiral Mark Norman, the Globe and Mail’s Bob Fife reports. In 2015 the newly minted Prime Minister was angry that a cabinet decision to postpone a $668-million naval supply ship contract with the Davie shipyard in Quebec City had been leaked to the CBC, and wanted to know who was behind the leak. Fife writes that it’s rare for prime ministers to get involved in leak investigations, and that could explain why the investigation was handed over to the RCMP, also a rarity. It was the RCMP that traced the leak to Norman. Not that we’ll hear much from Norman about it all right away—on Thursday the Liberal majority on the House of Commons defence committee blocked an effort by opposition members to launch a probe of the affair that would have called on Norman to testify. (Globe and Mail, CBC News)

‘Backsliding‘: In the wake of Alabama voting to criminalize abortion with no exceptions for rape or incest, Trudeau said he was “disappointed by the backsliding on women’s rights” and pointed to “conservative governments and conservative politicians” taking away the rights of women—a message the Liberals rolled out as their latest fundraising pitch. “We need to send a message that no one — including [Conservative leader] Andrew Scheer or any member of his caucus — has the authority to dictate to women what they can and cannot do with their bodies,” read an email that was set to go out to Liberal supporters yesterday.” “Complete hypocrisy,” Scheer fired back, claiming he “will not re-open this debate.” (Global News, Twitter)

Canadians like to reassure themselves that Alabama’s abortion ban couldn’t possibly ever happen here, but that’s just because they haven’t been paying attention, argues Maclean’s senior writer Anne Kingston:

In the past year, two of Canada’s largest provinces—Ontario and Alberta—elected majority Conservative governments led by premiers who are actively supported by the increasingly vocal, well-organized, politically strategic anti-choice lobby. In the course of my investigation of these groups last year, I spoke to several anti-choice activists then working to elect Jason Kenney as the “pro-life premier” of Alberta. Jeff Gunnarson, vice-president of the Campaign for Life Coalition, a national group that works to nominate and elect candidates who oppose abortion to all levels of government, told me his group threw its support to Doug Ford after the politician reassured them he supported all of their demands: to defund abortion; to require parental consent before a minor receives an abortion; to uphold “conscience rights” that allow medical professionals not to refer a patient needing abortion or assisted suicide; and to scrap the sex-ed curriculum of Kathleen Wynne’s government. (Ford’s office refused to provide comment at the time.)

Though these groups emphasize ending abortion, a topic destined to garner headlines, that’s a dog whistle for a broader social-conservative agenda that includes rolling back LGBTQ rights, ending gay marriage, and outlawing sex education. Notably, abortion was a top-line topic at the Conservative Party of Canada’s policy conference in Halifax last year. Delegates voted to delete Article 65, the 2014 motion dictating that the party will not legislate on abortion. It was the ﬁrst time since enacted that the motion was discussed at a convention. It was defeated narrowly, by 53 to 47. (Maclean’s)

But wait, haven’t we heard these warnings many times before, asks Andrew MacDougall, who argues that by reviving claims of a Conservative “hidden agenda,” the Trudeau government is showing it’s in panic mode:

And yet, after nearly 10 years of government by Stephen Harper and his anti-choice army, you can still get an abortion in Canada. At this point, the political right’s agenda is so well hidden Sherlock Holmes couldn’t find it with a Huawei P30 powered by a trillion Watsons. (Maclean’s)

Eye on the Ball: After seeing Liberal premiers in other provinces suffer a string of election losses, Newfoundland and Labrador Premier Dwight Ball managed to keep his job, barely. Yet with such a razor-thin victory in Thursday’s provincial election—the Liberals won just 20 of 40 seats, down from 27—it’s not clear anyone really won, writes Aaron Hutchins, meaning a province that was in dire need of stable government instead gets a minority, and a likely return to the polls in the near future. (Maclean’s)

Garbage in, garbage out: When all is said and done, it could cost Canadian taxpayers $2.6 billion and take another four years to stabilize the gong show that is the Phoenix pay system for federal public servants, and that needs to happen before a new system is put in place to replace Phoenix, says Canada’s budget watchdog Yves Giroux. Installing a new system without untangling the Phoenix mess first “would be putting a bunch of garbage into a new system … [We need] sound, accurate data to feed into a new system.” (CBC News)

The feels economy: The Conservative leader’s second get-to-know-me speech, delivered in Toronto to the Economic Club of Canada, focussed on—you guessed it—the economy. Not necessarily the economy captured in the latest reports from Statistics Canada, but the economy as Canadians feel it: “The economic indicators might say one thing. But the human indicators say something entirely different. People are only barely getting by. And they’re not getting ahead.” (CBC News)

Much of Scheer’s speech was given to attacking Trudeau for being incompetent and irresponsible with the nations finances. And while he didn’t shed any light on if and when he plans to balance the budget, Scheer pitched his economic agenda—turning Canada into a country of “yes” instead of the Trudeau “no”, reigning in spending, and developing a single cross-Canada corridor for transmission lines and pipeline projects. (Globe and Mail)

Whoever leads Canada after this fall’s election (or herself, assuming the mother of all Green upsets) faces the rising possibility of a “severe nationwide recession, a large house price correction and a sharp repricing of risk in financial markets,” according to the Bank of Canada‘s latest risk assessment of the financial system. (Bank of Canada)