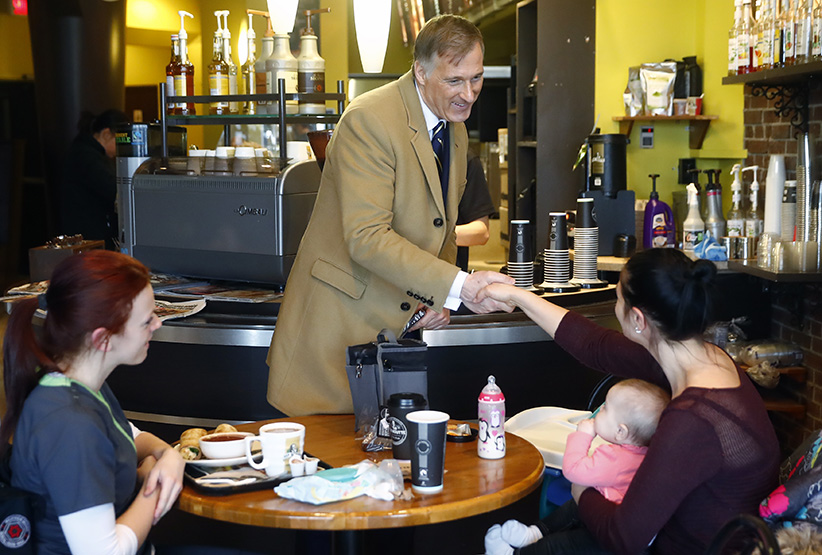 Maxime Bernier’s proposal to end federal transfer payments to provinces to help fund health services would make the Canada Health Act “unenforceable,” says a spokesman for his front-running campaign for the Conservative Party of Canada’s leadership—which means the fate of universal care would rest entirely in the hands of provincial governments.

In an email exchange with Maclean’s this week, Bernier’s director of communications, Maxime Hupé, at first asserted that even if Ottawa stopped sending the provinces any money for health, the law would continue to apply. “Provinces would still have to respect the Canada Health Act that ensures universal coverage,” Hupé initially said.

But that was a strange claim. The landmark 1984 federal law’s purpose, as clearly set out in the act, is to establish the rules provinces must comply with to qualify for transfers. Provincial health insurance plans, the act stipulates, must be publicly administered, comprehensive, available to everybody, portable and accessible—or the federal government can hold back money.

Pressed for reasons why provinces would still have to adhere to the act’s five principles if billions in annual transfers were no longer at stake, Hupé said he consulted with Bernier’s policy advisor and corrected the campaign’s position. “The CHA is only enforceable politically by the threat of reducing transfer payments,” he said. “Without transfer payments, it is unenforceable.”

Yet Bernier argues that universal health care would survive in Canada if Ottawa left it up to the provinces. He points to the force of public opinion—not just in Canada, but throughout the developed world, except in the U.S.—which remains solidly behind universal coverage.

Bernier’s plan calls for the federal government to give the provincial governments room to hike their taxes, making up for the loss of transfers. (In 2017-18, federal Canada Health Transfer to the provinces is expected to total just over $37 billion.) After that, he says the provinces would assume full responsibility for health, which falls under provincial jurisdiction in the Constitution.

“With this reform, the provinces will no longer have excuses, but they will be empowered to fix the system,” Bernier said last fall in his key speech on the subject. “They will stop constantly begging for more money and won’t be able to blame Ottawa for their failure to tackle wait times.”

His reference to wait times is critical. Bernier builds much of his case for radical reform around long waits for care. Indeed, a survey by the Commonwealth Fund, a New York-based foundation that studies health care, found Canadians tend to wait longer to see a doctor than patients in 10 other developed countries.

It’s far from clear, though, that highlighting frustrations over wait times will be enough to make Bernier’s plan a politically saleable one for Conservatives. In the past, the party’s election strategists have rejected Liberal and NDP claims that Tories were not really committed to universal care backstopped by Ottawa’s spending power. On his way to winning a majority in the 2011 campaign, for example, Stephen Harper’s campaign repeatedly declared that Conservatives “strongly support for the Canada Health Act.”

Bernier’s challenge to that orthodoxy has not featured as a particularly high-profile element in his strong campaign for the leadership, which will be decided on May 27, when votes from party members will be counted and the new Conservative leader announced at a convention in Toronto. More critical attention has focused on Bernier’s call for sharply lower taxes, as well as on his opposition to supply management for farm products including milk, a controversial stand in Quebec, his home province.

But public opinion research and political history suggest his health care position is far more risky. Just before the fall 2015 election, Ekos Research released poll results that showed 64 per cent of respondents thought the federal government should take the lead on “protecting, promoting and improving Canadians’ health,” compared to just 31 per cent who preferred provincial leadership on health.

Conservative operatives who bear the scars of fending off Liberal and NDP attacks on Tories as soft on health care know how touchy the issue can be. “Canadians love their health care system, warts and all,” says Geoff Norquay, who was Harper’s communications director when he was Opposition leader, and now advises companies on crisis communications for the consulting firm Earnscliffe Strategy Group. “Even when thoughtful and knowledgeable people talk about the warts, it is very easy for their criticisms to be taken as a threat to health care as we know it.”

Norquay is backing Ontario MP Michael Chong in the leadership race. Chong has been blunt in his criticism of Bernier’s health policy. “By eliminating the federal health transfer, and proposing to do a one time tax-point transfer from the federal government to the provinces, he’s effectively eliminating the Canada Health Act,” Chong said in an interview late last month. “And the five guiding principles of the Canada Health Act ensure our public, national health care system. So that is an extreme policy that I think will hand the Liberals the next election.”

Most of the other Conservative leadership contenders have been more muted, or even silent, on Bernier’s health-care stance. That might reflect a sense that many in the Conservative base share Bernier’s stated hope that provinces, freed to do so, would pursue reforms like “allowing for private insurance and private service delivery.” It could mean many more initiatives like Saskatchewan’s program that lets private MRI services operate in parallel with publicly funded diagnostic scans, a system the federal government has given Saskatchewan a year to prove somehow conforms with the Canada Health Act.

Critics say that allowing private insurance for health care that’s covered by public plans amounts to two-tier care—the wildly unpopular prospect that led Stockwell Day, when he was Canadian Alliance leader, to famously rule it out by holding up a hand-scrawled “No 2-tier health care” sign during a leaders’ debate in the 2000 election campaign. (Day has since changed his mind.)

Bernier seems to be betting that the public opinion climate, which Day found so powerfully against anything even hinting at a threat to equal care for all, has grown more flexible. As a Quebecer, he might also be influenced by Quebec City’s tradition of opposing federal incursions into areas of provincial jurisdiction. Pollster Nik Nanos, of the firm Nanos Research, sees Bernier’s health policy mainly as a way to lure Quebec voters.

“This is a strategy tailor-made to activate interest and support in a Bernier-led Conservative Party in Quebec,” Nanos said in an email. “I think this is a key signal from the Bernier campaign that it sees Quebec as a priority for winning more Tory seats in the province as opposed to the Conservatives holding what they have.”

Whether based on strategy or conviction, or some combination of both, Bernier’s health policy sets the stage for a political battle that past Conservative leaders have struggled to avoid. If he wins the Tory leadership on May 27, expect Liberals and New Democrats to gladly give Bernier the fight he appears to be inviting.