Dear Canadian voters: it's time to get in the game

Maclean's Editorial: Canada's next federal campaign ends Oct. 21, 2019. But a few weeks of attention every four years is no longer enough: the time to be informed and engaged is now 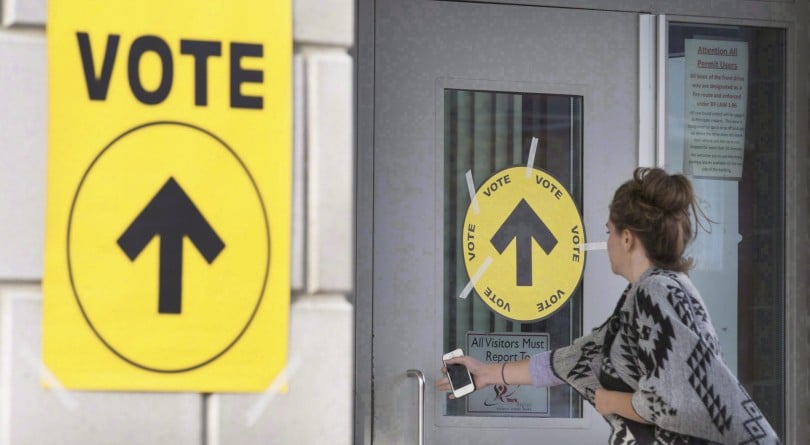 A woman enters Maple High School in Vaughan, Ont., to cast her vote in the Canadian federal election on Monday, Oct. 19, 2015. (Peter Power/CP)

Remember the 78-day 2015 federal election campaign, and how it was the longest in Canada since 1872? Well, voters: it’s time to get back into game shape. The next election might be a year away, but it’s already time to get off the sidelines and into the arena.

Most voters don’t turn their focus to political issues until a month or so before polling day. Yet the campaign that ends Oct. 21, 2019, has already unofficially begun. Top of the agenda is taking the measure of Prime Minister Justin Trudeau. If Trudeau is to avoid becoming an item of political trivia—since Confederation, only two single-term majority governments have been tossed from office on their next trip to the polls: Liberal Alexander Mackenzie in 1878 and Conservative R.B. Bennett in 1935—he’ll have to convince Canadians he has done more right than wrong.

Lately, the debit side of the Prime Minister’s ledger has been filling up at an alarming pace. The Liberals have been dealt serious blows on several crucial matters, including the recent Federal Court of Appeal ruling on the Trans Mountain pipeline that forces Ottawa back to the consultation table with Indigenous groups. Trudeau made a bold $4.5-billion bet he could get the pipeline completed as part of his platform of marrying economic growth with environmental stewardship. Now that gambit looks very risky. His pipeline problem has also caused a knock-on effect for plans to have the provinces impose carbon taxes on the federal government’s behalf— Saskatchewan and Ontario are already opposed to the concept, and news of the delay has Alberta balking as well.

As for credits, Trudeau can point to a moderately successful economy and general sense of competent leadership. The fate of NAFTA lurks ominously, but most Canadians are reasonable enough to recognize the difficulties in negotiating with U.S. President Donald Trump. And while the intricacies of the rollout of legalized marijuana are proving to be rather complicated and messy, the Liberal government is in the process of delivering on a significant election promise that will change a major component of Canadian life. That’s a big-picture win.

For Conservative Leader Andrew Scheer, Trudeau’s many struggles are reasons for optimism. Canadian Conservatives often look to Australia for lessons, and that country has already demonstrated the electoral toxicity of a national carbon tax; in 2013, opposition leader Tony Abbott rode to power by decrying the Australian Labor government’s carbon-pricing scheme as a “great big tax on everything.” Canadian voters, of course, should make up their own minds about whether Trudeau’s carbon tax will be good or bad for the country.

As for Scheer’s negatives, his recent pledge to revoke Canadian citizenship in certain situations smacks of the same discreditable nativism now popular south of the border. Voters must be vigilant to ensure Scheer keeps his party within mainstream parameters.

Voters will also need to keep an eye on NDP Leader Jagmeet Singh, if only to check for signs of life. To date, Singh has made scant contribution to political debate in Canada. He’ll need a bigger splash if he intends to compete in 2019.

Outside the main political parties, voters should be aware of how lobby groups are positioning themselves for the next federal clash. As Anne Kingston reports, a movement that opposes abortion has made recent gains at both the provincial and federal levels in promoting favoured candidates and changing the language of the debate. Other groups wanting to be heard on this, or any other hot-button issue, should pay heed to an approach that is yielding results.

An informed and engaged electorate is democracy’s best defence against political extremism and social discord. However, this important responsibility is no longer something that can be relegated to a few weeks of attention every four years. With politicians and interest groups already manoeuvring toward next year’s election, it’s time for voters to get in the game as well.