Maclean's is your destination for the 2015 election. Start with our in-depth primers on the big issues, including democratic reform

Should the Senate stay or go, or, at least, change? It’s an old, often frustrating debate. This year, the main parties have staked out distinct positions. The Conservatives would like to see an elected upper chamber, though, lately, they’ve suggested the provinces should take the lead on making that happen. The NDP wants to abolish the Senate. The Liberals would establish an independent process of some sort for nominating senators.

Disgraced former Tory Sen. Mike Duffy’s trial resumes in August, when the fraud trial of former senator Mac Harb, who was appointed as a Liberal, is also slated to begin. And Auditor General Michael Ferguson has referred the expenses of nine senators to the RCMP for investigation. In his July report, Ferguson found that 30 of 116 current and former senators included in his review had filed questionable expenses. The Senate appointed retired Supreme Court justice Ian Binnie as its special arbitrator to review cases where senators dispute Ferguson’s findings.

Conservative:  In 2004, Stephen Harper vowed: “I will not name appointed people to the Senate. Anyone who sits in the Parliament of Canada must be elected by the people they represent.” He has since appointed 57 senators, including Duffy, Pamela Wallin and Patrick Brazeau—all now suspended. His bid to reform the Senate—mainly by setting term limits and indirectly electing senators—was thwarted by the Supreme Court of Canada in a ruling last year. The court said the reforms would require the approval of seven provinces with 50 per cent of the population. Prevented from moving alone, his government now urges the provinces to take the lead.

NDP:  The party has long advocated abolishing the upper house, which would require reopening the Constitution, but has also suggested removing senators from party caucuses and even ceasing to fund its operations.

—Make the Parliamentary Budget Officer an independent officer of Parliament

Liberal:  Trudeau kicked all Liberal senators, 32 at the time, out of his party’s caucus in 2014, and has advocated a non-partisan appointment process. “An independent-minded, non-partisan group of people could be formed by everyone—from provincial interests to prominent Canadians to ordinary Canadians, as well—[who], in various ways, would make recommendations to the prime minister, who would then appoint the person of his choice from a list,” Trudeau told Maclean’s. His approach has the advantage of not requiring any constitutional wrangling with the provinces.

Green:  Elizabeth May has criticized Bill C-7, the Senate Reform Act that was rejected by the Quebec Court of Appeal in 2013, as unconstitutional, and has said the Green Party would focus on more accessible democratic reforms, such as proportional representation in voting, reducing partisanship in the Senate, and even lowering the voting age. The Greens want to hold a referendum on Senate reform to determine how to proceed with possibly electing senators or changing regional distribution. 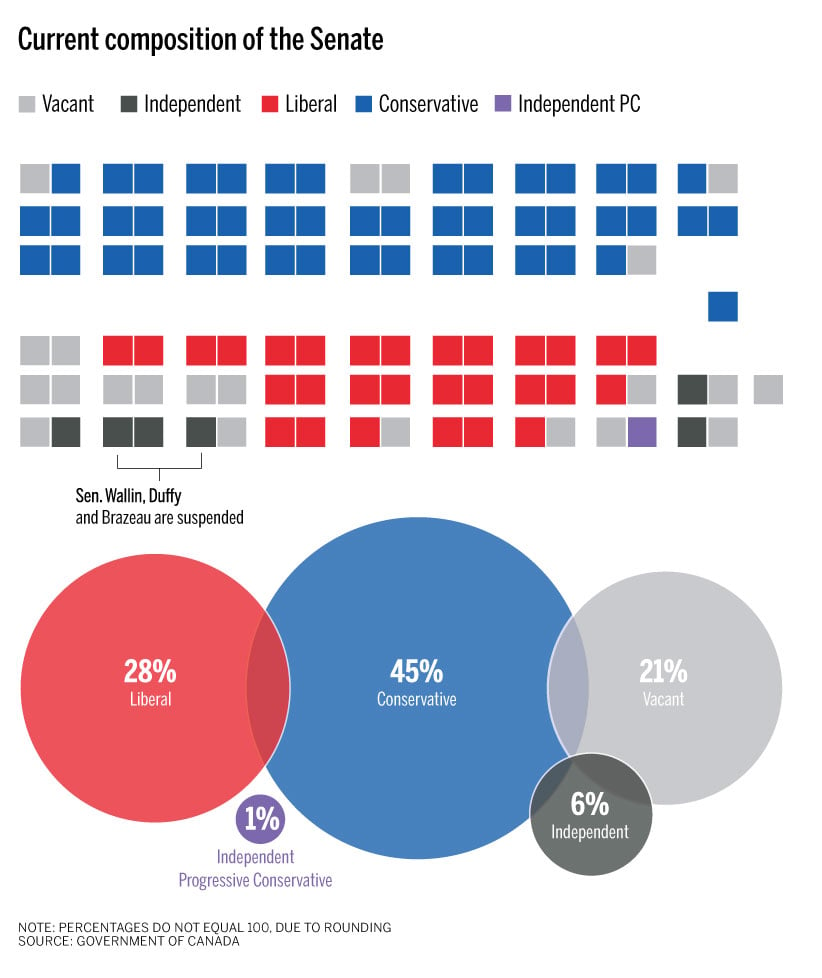 “Voters should be aware that whatever might happen with the Senate is not going to be entirely up to the federal government. If we want to make substantial changes to the Senate, to how it functions, how senators are appointed, we’re going to need some degree of provincial consent. If we want to get rid of it entirely, we’re going to need all of the provinces on board. The election might not solve much at all.”
—Emmett Macfarlane, University of Waterloo political scientist

“The Senate expense scandal has shown that the operation of the Senate is clearly broken. Similarly, many Canadians view the House of Commons and Canadian politics with cynicism if not disdain. It has become cliché for political parties to talk about “cleaning up Ottawa” and “democratic reform.” I think Canadians want to know what concrete measures each political party will take to improve our democratic institutions.”
—Adam Dodek, University of Ottawa law professor