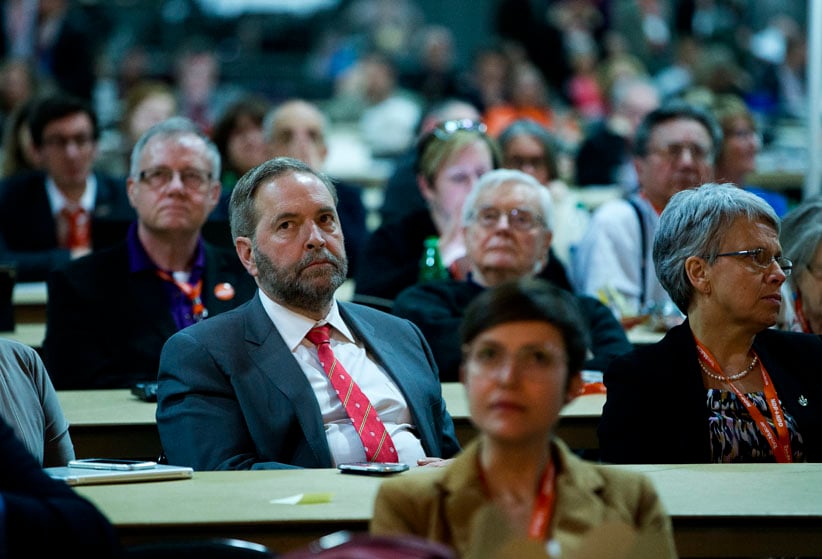 OTTAWA – The rifts exposed by the NDP’s divisive non-confidence vote in Tom Mulcair’s leadership deepened Monday as some New Democrat MPs questioned his intention to stay at the helm until a successor is chosen.

The new divide emerged as shell-shocked MPs returned to the House of Commons, still struggling to absorb the fact that delegates at a weekend convention voted Sunday to send Mulcair packing.

Some MPs welcomed Mulcair’s plan to remain leader for up to two years until a replacement is chosen.

But others doubted that would be palatable to grassroots New Democrats, given that just 48 per cent of convention delegates supported Mulcair continuing as leader; 52 per cent voted to hold a leadership convention to replace him.

“In my view, you know, it’s going to be very difficult for Mr. Mulcair to stay on until our next permanent leader is chosen in a year and a half,” said Vancouver MP Don Davies.

“We invited Tom to make his case as to why he should lead us and he got 48 per cent and, you know, numbers are real.”

The NDP constitution stipulates that a leadership race must be held within a year but the convention voted to extend that to up to two years, although insiders suggest it won’t drag on beyond about 18 months.

Davies said he’d support Mulcair remaining leader for “a significant period of time” but not as much as 18 months or more.

Related: Paul Wells on what comes next for the NDP

Pierre-Luc Dusseault, MP for Sherbrooke, Que., said he’s not sure if Mulcair should remain at the helm.

“I have not made up my mind yet on this question,” he said. “It will be a discussion that we will have with the caucus members to see if that would be the ideal situation or if it should be something else.”

Montreal MP Alexandre Boulerice said as far as he’s concerned, Mulcair can stay as long as he wants. But he suggested the rest of the 44-member NDP caucus may not agree.

Veteran British Columbia MP Peter Julian argued that delegates essentially decided that Mulcair shouldn’t be the leader heading into the next election in 2019; they didn’t say he should be dumped immediately.

All New Democrats would be “gratified” to have Mulcair continue to demonstrate “the undeniable assets that he possesses as a parliamentarian,” he added.

“In every case where we have had a leader who is moving on, that leader has stayed in that position until their successor was chosen … In the 40 years I’ve been in the party, that is how we’ve always worked,” Julian said.

While MPs debated how long or whether Mulcair should remain leader, there were few indications Monday of who might be prepared to run to replace him.

Boulerice and Julian, both potential contenders, didn’t say slam the door on the idea of running for the leadership. Boulerice said he needs time to think it over and discuss the matter with family and colleagues while Julian said he hasn’t given it any thought as yet.

But former Halifax MP Megan Leslie said over the weekend that she’s shut the door on a potential leadership bid.

And veteran NDP strategist Brian Topp, runner up to Mulcair in 2012 and now chief of staff to Alberta NDP Premier Rachel Notley, ruled himself out Monday.

“I won’t be a candidate in the coming leadership race,” Topp said in posting to his Facebook page.

With the party deeply divided over Mulcair’s leadership and Alberta New Democrats furious about the adoption over the weekend of the principles of the radical, anti-fossil fuel Leap Manifesto, Topp offered some advice for New Democrats as they prepare to embark on a leadership race which could exacerbate those rifts.

“Federal politics is about finding the thread that unites the pearls,” he wrote. “Being a compelling political offer in all regions of the country, in both official languages, is the real issue we all need to be thinking about over the next two years.”