Though passages were withheld, the memos disclosed on the Access to Information Act do confirm Treasury Board officials want to strengthen the right of access 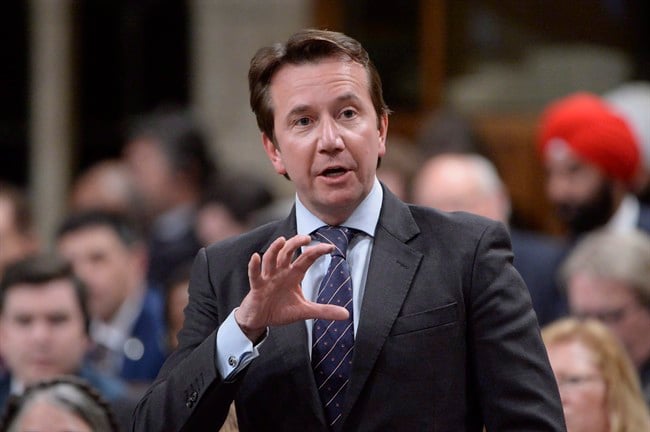 President of the Treasury Board Scott Brison answers a question during Question Period in the House of Commons on Parliament Hill in Ottawa, on Monday, Feb.1, 2016. (Adrian Wyld/CP)

OTTAWA – Federal proposals on how to make the government more open are being kept secret.

The Treasury Board Secretariat has chosen to withhold key memos to minister Scott Brison on reforming the antiquated Access to Information Act.

Prime Minister Justin Trudeau’s government has promised to amend the access law so that federal information is open by default.

But Canadians aren’t allowed to see the advice from officials on how to reach that goal.

The Canadian Press used the access law to request recent briefing notes and memos to Brison on possible reforms. However, entire pages were withheld for fear of revealing government advice, consultations or deliberations.

It is “really troubling” that the public is denied insight into the process, said Sean Holman, an assistant professor of journalism at Mount Royal University in Calgary.

Some passages in the 17 pages of government records have been declared cabinet confidences, meaning they cannot be disclosed.

But the department could have released the pages containing advice and deliberations, Holman said after reviewing the records, noting the exemption is not a mandatory one that must be applied under the law.

“What would be so wrong in letting the public know about what options are under consideration? It would simply result in a debate about those options. The government would be better informed about where the public stands on this particular issue.”

Jean-Luc Ferland, a spokesman for Brison, said ministers were working to improve the law with a mandate to make information open by default. “This will require a consultation with parliamentarians, agents and officers of Parliament, and other stakeholders.”

The pages that were disclosed do confirm that Treasury Board officials see a need to strengthen the right of access.

The Access to Information Act has remained largely unchanged since 1983 and is now out of sync with the digital environment and public expectations, one page says.

The Liberal government made several access reform commitments during the election campaign, including expansion of the law to cover ministers’ offices and administrative institutions that support Parliament and the courts.

A House of Commons committee is now carrying out a wide-ranging review of the legislation. Information commissioner Suzanne Legault, an ombudsman for users of the law, urged MPs last week to take bold steps on reform.

Holman said nothing prevents the Liberal government from encouraging openness by default while the review is being done.

In fact, he pointed out, the former Progressive Conservative government of Joe Clark did just that in 1979 after its access bill moved to committee. Clark sent a letter to deputy ministers urging them to “act in the spirit” of the bill even though it would be some time before it took final shape.

The Clark government fell before the bill could become law, leaving it to Pierre Trudeau’s Liberals to usher in the Access to Information Act.