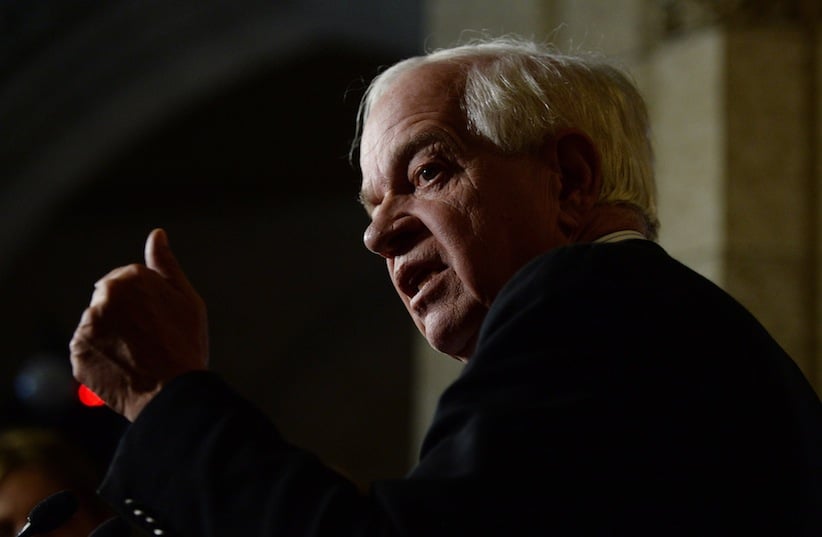 Minister of Immigration, Refugees and Citizenship John McCallum speaks to reporters in the foyer of the House of Commons on Parliament Hill in Ottawa on Monday, November 9, 2015. THE CANADIAN PRESS/Sean Kilpatrick

OTTAWA — How the Liberal government intends to bring thousands of Syrian refugees to Canada by year’s end will become clear Tuesday with the rollout of the plan for the largest rapid resettlement program in the country’s history.

Federal ministers would not divulge any elements of the proposal Friday or comment on a document obtained by The Canadian Press that suggests the cost of the program could hit $1.2 billion, far more than the $250 million the Liberals budgeted in their platform to resettle 25,000 Syrian refugees.

The document, called “Responding to the Syrian Refugee Crisis: Rapid Resettlement of 25,000 Syrians Funding Table,” lays out costs over the next six years and says $876.7 million would be needed in 2015-2016 alone.

Some of that would be covered by $16.6 million announced by the previous Conservative government during the election and $100 million coming out of an existing pool of funds to respond to international crises.

What’s not clear from the undated document is whether any of those funds are going to help the settlement agencies, provinces or cities which will bear the burden of the longer-term integration of refugees.

Immigration Minister John McCallum said Friday that in recent days he’s spoken to dozens of mayors and the premiers of all 13 provinces and territories.

A call with big city mayors is schedule for Monday, the same day Prime Minister Justin Trudeau is to meet the provincial and territorial premiers.

“This is the right thing to do. It is the Canadian way.”

Under the funding model in the document, the Public Health Agency would receive $8.6 million this year for the program. The Immigration Department would need $528.4 million and the Defence Department $98.7 million. The Canada Border Services Agency is the only department that would receive funding in each of the next six years, for a total of $48.8 million by the time the money runs out in 2020-2021.

In Halifax, Defence Minister Harjit Sajjan said the federal government will be mindful of the recent terrorist attacks in Paris and Beirut when screening applicants and he said the most vulnerable refugees will be selected for resettlement.

Many of the newcomers will also bring skills that will ultimately benefit to Canada.

“They’re not fleeing poverty, they’re fleeing war,” he said. “These people are coming with phenomenal skill sets and the people that do resettle in this area are going to be contributing to our economy.”

Later Friday, McCallum was expected to address a gathering of settlement agencies in Toronto who are working together in preparations for the influx of people.

Among the major concerns is where they are all going to live. While the military is planning to temporarily house some on bases and the government is actively seeking other options, the people coming will need permanent homes.

“I call upon Canadians, if they have access to free or cheap but decent lodging, help us out, we want to hear from you,” McCallum said.

Several local agencies have set up online or telephone contact points for people to register support. One Toronto-based organization has even created a mobile phone application.

Conservative Immigration critic Michelle Rempel said she hopes the details revealed Tuesday are robust and answer all the questions non-governmental organizations, provinces and Canadians have about how exactly this program is going to run.

NDP Immigration critic Jenny Kwan said the government owes it to Canadians and to the refugees to handle this right.

“We’ll be watching closely to make sure the Liberals stick to their promise to Canadians,” she said in a statement.

“And we’ll make sure the discrepancy between their platform and what the reality looks like doesn’t become an excuse for the Liberals to backtrack on their promises.”